Excited to see what you come up with for a table.

Excited to see what you come up with for … table.

Yep, me too. Excited to see what you come up with for your table. 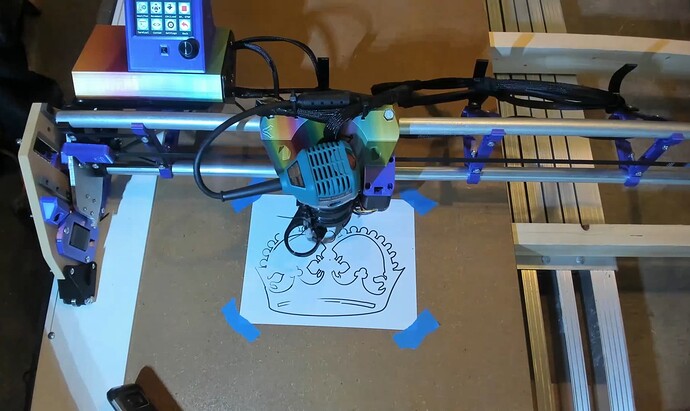 Janksy currently rides on not a table legless flat surface. Copied and tweaked some forum ideas:

No legs, probably getting short term casters. Still figuring out how to hoist onto side against the wall when not in use.

've had worse ideas, thinking Harbor Fright’s $15 rope and tackle usually used to hang your meat, is worth trying out on my LowRider not a table surface.

Really like super strut, but don’t like how a complete system prices out to. So, doing best I can by frequently asking myself WWMD? (What would Macgyver do).

Created a video… Hope this helps folks figuring out whether, and how to build their LowRider 3! Went a bit nuts on the indexing. My thinking is that this approach helps make info more discoverable.

Sharing details since I asked during my build, and @KL2001 asked similar question today.

Didn’t have this info for my build, and extended endstop wires by soldering butt connectors (fast video clip, don’t blink!). Used a mix of 3x extension wiring kits from V1E Shop and some 22AWG wiring I happened to have.

Knowing what I know now, would’ve cut the following endstop wiring lengths upfront during initial build to help save some splicing/soldering time.

Think @stevempotter uses hall effect based sensors on their MPCNC?

Yes, I have one Hall effect switch for each stepper motor (or, 2 for each of the X and Y axes, and one for the Z-up) and I have to say that after a year of using the machine, they work very reliably. You don’t have to worry about bumping them, or any effects of dust. Here is a video about them: https://youtu.be/ztcMPmEYCmw?t=763
I carefully measured their repeatability and it came out to about 15 microns. The standard microswitches actually came out a bit better, about 10um. (standard deviation of many measurements using a digital micrometer to trigger them.)

Created separate topic with details about my LR3’s front grill

Any reason(s) why front strut needs to have the triangle cutouts? Can front be solid, and personalized even? Have cut custom sized rear and bottom struts thanks to @jamiek’s awesome LR3 Strut Plate variable sizes plus OpenScad script. Figured doing something different for the front would be good opportunity to learn a bit of OpenScad, not used before, so apologies for naive questions. Hacked and made mess of Jamie’s script and came up with personalized solid front, my initial goal was to red… 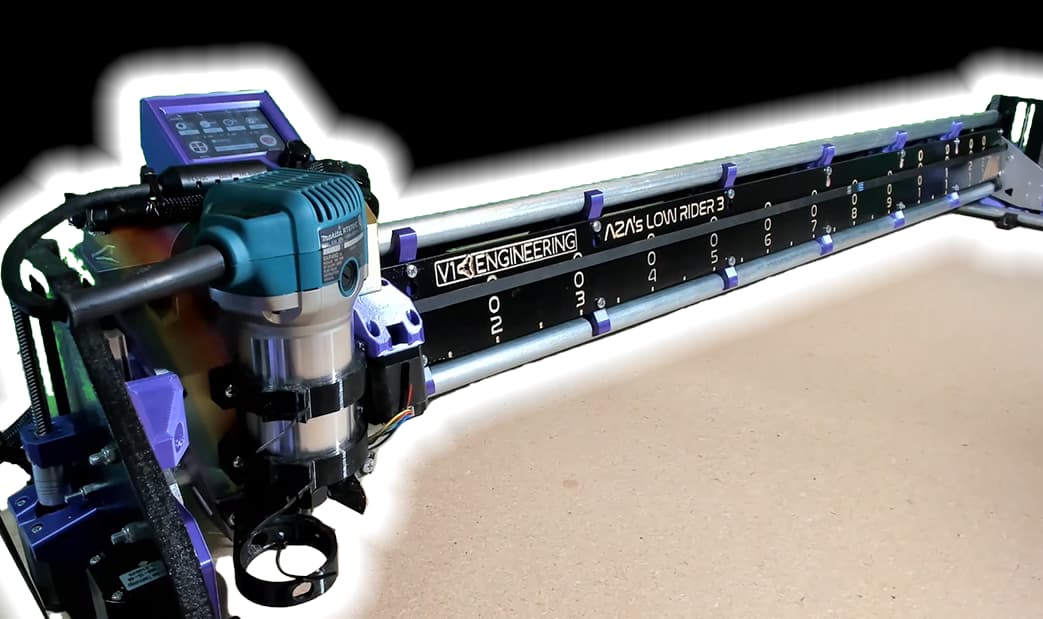 “True Level” will have to remain a fantasy, for now.

Have procrastinated, overly deliberated and navel gazed on the ideal ‘medium sized work’ workbench. Am just going to quickly throw something together, will look something like below, with casters. I can always add levels and lasers later… 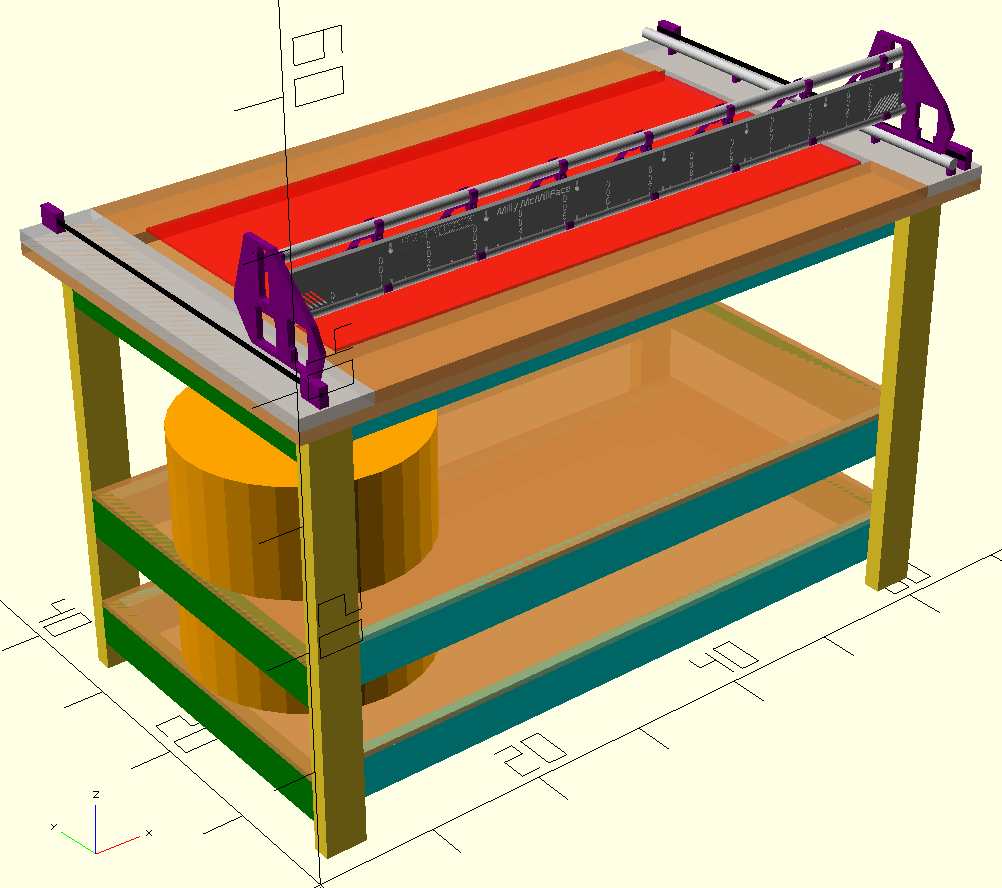 Me: Progress! Today, I’ve decided how wide to make my mostly LR3 workbench. Wow! Time for me to listen to https://www.amazon.com/Decisive-Chip-Heath-Dan-Heath-audiobook/dp/B00B3Z5QFK again…

Yeah. Colin Furze has no fear and so much talent.

Anyone recommend sealing/painting the inside of their torsion box?

My mostly LR3 workbench, topped with a partial torsion box, is in an unconditioned garage, so dry, but enduring the Pacific Northwest climate.

The “torsion box” isn’t fully boxed, will be eventually leaving off front rail/apron so some plastic containers can slide in. Front rail is just temporarily fastened while I get rest of blocking and top/bottom skins fastened.

Sending an update to 1) get feedback on my mistakes, 2) share ideas that might help others, 3) help motivate me to get this done,

This is relatively simple build. No fancy collapsing/rotating mechanisms. Assembling using easy to modify in the future screws, except for the box which also has glue. My goal is to build enough so LR3 is always setup to use. But build in a way that enables some probable upgrades to be easily added.

Tried modeling in OpenSCAD, but ended up abandoning/pausing that design. Instead, have created a somewhat parametric design using Fusion 360. My LR3 will sit perpendicular to most folks’ builds (see earlier post), front will be clear, and shelves will be recessed/contoured to allow usage as a regular assembly workbench. Still figuring out vice type and location. 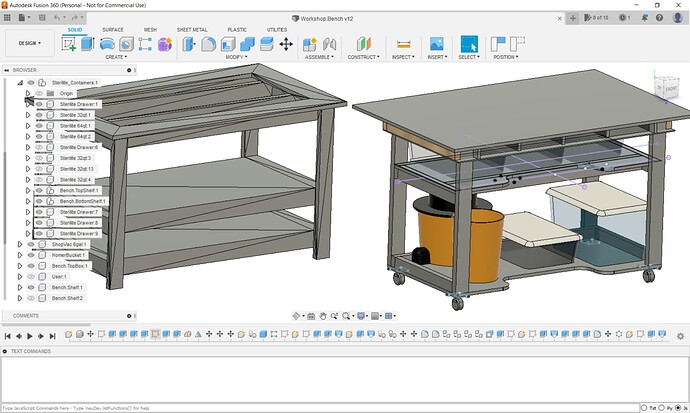 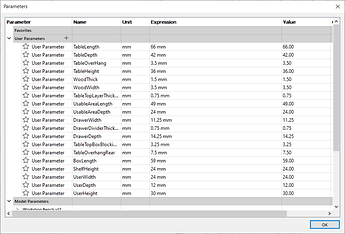 Managed to squeeze some Sterilite containers into the almost a torsion box top, can alternatively insert 12x1 plank and use as a desk extension. Did this by ripping the 2x4 blocking to double up as drawer/shelf runners… 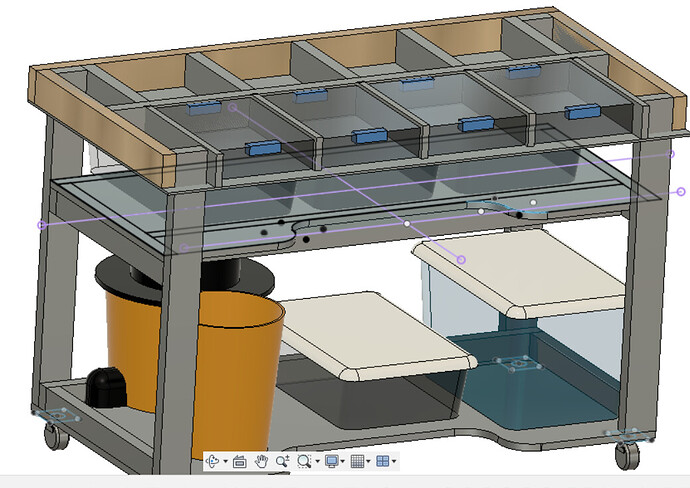 Baby got back! Decided to extend rear to ensure LR3 doesn’t overhang, controller box and vac hose stick out a bit. This’ll reduce risk of damage, and make future enclosing of the LR3 easier (dust/noise control): 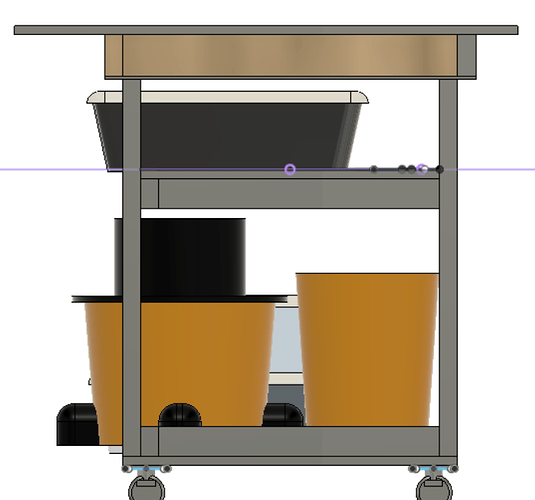 Beyond this sketch, will be adding additional ply sheets on the sides, maybe the back too, to hang/mount stock/stuff, and add shear strength/rigidity. Adding diagonal bracing as needed (steel cables maybe like Stuff Made Here’s sweet puzzle solving CNC). 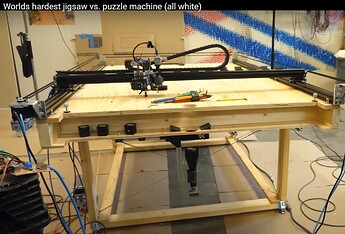 Legs will insert into openings within underside of the torsion box, will add brackets and bolts to allow tuning corners to be on the same plane. Simple 3"-4" braking-casters for now, can get fancy if/when needed later on.

Dimensioned lower section to fit in 28" opening, so can move/transport in/out house through 30"+ door entry. Outdoor weather’s crap right now. Top will be removable for transport and/or ‘portable’ to jobsite/friends.

Will be running vac, with dust stop collector, similar to bench in LR3 docs. I didn’t bother to sketch, power/controller cords and E-Stop, they’ll be strapped on at the end. Am copying JeffeB (and others) by having a 1-1/2" thick table top (with spoilboard) with plenty of overhang, and plenty strong to enable mounting power/controller enclosures.

For me, real life is nothing like those many, many, workbench YouTube videos with their slick build montages.

Drop table and overhang cuts would be nice. Best I can think of currently is to have the Y rails, on bench dog fastened rails. Or, build yet another LR3 table, a drop table version. The LR3 is portable after all. Want to start another build project before I’ve finished the current project… 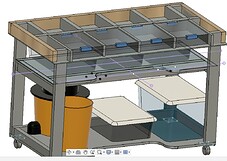 That, plus some bracing, with an adjustable/removable top torsion.

Was wanting to figure out a way to enable LR to occasionally overhang the front to cut vertical/thicker stock.

However… these dropped drop table mentions are sparking ideas about adding adjustable height shelf (using pins, peg holes, or something like Josh’s shoe rack, or something else?). LR3 would ride ply boxes that slot and lock onto what looks like upside down table legs at first glance.

Any additional adjustable height shelf ideas? Must involve ply/lumber/emt or something else cheap and easy to find at homedepot/lowes. e.g. doubled peg board? Trying to avoid expensive materials.

Resisting scope creep, and getting on with initial plan. Additionally implementing drop table feature will be good to add later.

Making progress, but still not ready to cut.

Also, am struggling to let go of the drop table idea. Many folks have made fold away CNC tables. Am curious how many convertible tables are out there? Table where either the middle section lowers (not just a removable sectionable), or, the main top torsion box flips out of the way to expose a drop table setup. Examples/ideas appreciated…

It doesn’t even need to be that complicated. You can just get two rails that are thicker for each side of the LR. Something nice and flat, like a stack of mdf strips.

Cheers for idea to raise LR rails instead of dropping stock. Want to engrave top ~1" of wood surface that’s ~12-20" high.

Stacks of MDF is less crazy than some of my other ideas. Am digging through Dui’s and others’ drop tables…