keep the source file, the process to create the svgs and the final svgs in the V1EngineeringInc space.

Agree. Will submit pull request that adds the script and generated .SVGs to the V1E Docs repo where the LR3 Calc (page with script) exists.

Agree auto build time gen would be nice to have (can’t see myself digging into that one right now tho). I appreciate the mindset of accepting improvements now, rather than waiting for ideal to (maybe) turn up later. Cheers!

can’t see myself digging into that one right now tho

I was thinking I would be involved, unless someone dropped the solution in my lap.

I appreciate the mindset of accepting improvements now, rather than waiting for ideal to (maybe) turn up later.

I have to remind myself that the Internet is littered with my broken promises. I will get to it all eventually, unless I die first.

Will submit pull request that adds the script and generated .SVGs to the V1E Docs repo where the LR3 Calc (page with script) exists.

anyone have issues with the X tensioner? The nut spins inside, and the whole part snaps when tensioning if you glue the nut. Not sure what I’m doing wrong. I printed it at 30% and then retried at 60% infill.

Hope response in main topic on this helps

Hello @juicyjesus! Welcome! Nut spin doesn’t sound good, mine were tight fit, so tight I had to use pliers to push the nut in for some parts. What filament, printer and settings are you using? Used Overture PLA on Ender 3 Max, 0.6mm nozzle, 0.32 layer height. I used infill % recommended in LR3 Docs plus additional 10% https://teachingtechyt.github.io/calibration.html helped me calibrate dimension accuracy, flow, temperature, speeds and the million other settings required to find a sweet sp…

Sounds like you might have a galled nut. Try a different screw and nut, make sure to pre thread the nut to loosen up the nyloc a bit. There is very little force on the nut otherwise so it has to be this.

Thanks for the replies, I will try this.
In the meantime I have wired up my lowrider and testing the motors. My Z motors are not moving under the lowrider load. They spin when I disconnect the threaded rod.

When I manually spin the rod the z axis moves freely.

Thanks for your continued assistance.

EDIT, after a little searching, could it be that the motors are splitting the current and torque?
I’m using a 1.4 RAMBO board from you guys, and the z motors are plugged into the two Z motor ports. Is that correct?
Seems to be more powerful when only one is connected. I can get it to lift the z axis part of the way, but when it reaches a certain point it stalls noisily.

the z motors are plugged into the two Z motor ports. Is that correct?

No. Wiring The Steppers - V1 Engineering Documentation
Or individually wired since you have the option for 5 steppers. That is most powerful.

In the documentation, it says to put X2 and Y2 into the E steppers.
I now see a small note about Z2 if it’s a low rider.

That makes sense, I had Y2 in E1 and noticed it was moving when I was testing the z motors.

Back to try again!

Still getting issues after connecting properly. 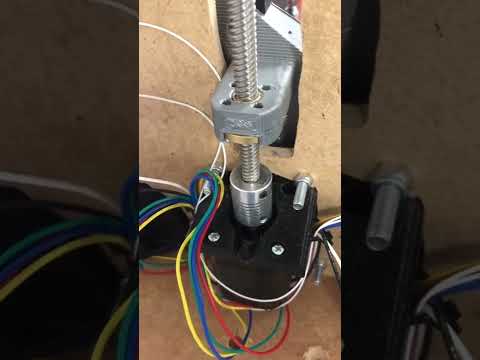 Is it a rod alignment issue perhaps?

Those two Z are wired in parallel, which will half the current. Don’t use the second Z. Either use dualLR firmware, which will make the E1 port Z2, or use a serial wiring adapter on the first Z port.

You also need to lube leadscrews.

The documents show where to wire the endstops for Z1 and Z2, but those are for the parallel option.
When using E1 as Z2, how do I wire the end stop?

There are three ways to wire it:

Dual LR, or independent. One motor per stepper driver. You just wire Z2 to E1.

Series (I sometimes say serial, sorry), which is wiring two motors to one driver, but in a way that the current has to go through both coils. Wiring The Steppers - V1 Engineering Documentation

Don’t wire them in parallel. The two Z ports on the rambo are wired to the same driver, in parallel. Either make a wiring harness to make them series, or better yet, just flash the rambo with the dualLR firmware and put the second Z in E1. 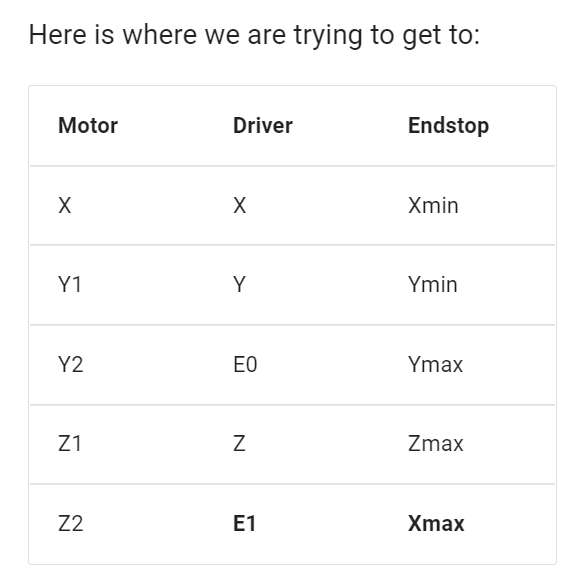 OI was asking about the endstops now, but I think I found my answer. Z1 motor in the normal z stepper, and z endstop.
Z2 in E1 stepper, and Xmax endstop. Right?

@KL2001 asked similar question today. Didn’t come across any recommendations during my build, so…

Just posted some endstop wiring info sharing what I did, what I learnt, and clips showing how I wired/built my LR3. Hope that helps folks.

I’ve completely assembled my lowrider (yay)
Now that the vacuum tube and router are installed, the z motors can’t lift all the way to the end stop if the X carriage is on its side.
Is there a way to tell the X to home first then move to the centre before Z homes?

Additionally, my x axis is long enough that the homing process times out and fails before completion. Can I tell it to home for longer?

I know I need to edit the firmware but not sure where to begin.

Let’s do this in your build thread, and please post some pictures if we can look for obvious issues. Where the router is should never have any impact on lifting. The machine is capable of far far more weight than a router.

Does anyone have a way to print the dxf files to use as a template for to cut on manually ?

Most any program that can view a DXF will print them out to scale.