I’ve got 3 different shades of red PLA running on four distinct printers! My LR3 upgrade journey has begun. I don’t even know if I have all the hardware yet… I’ll cross that bridge soon, but in the meantime, the printing has begun, and with 7 printers in the house (not counting an 8th one that’s not yet been taken out of the original box), I will make short work of the printed parts portion (although one of my printers is currently on loan to our church’s K-12 school). Here are some early pics:

———
One of 4 BIQU B1’s — my oldest one, and my only B1 with a 0.6 nozzle (though likely the others will get upgraded the very next time I have to work on their hot ends): 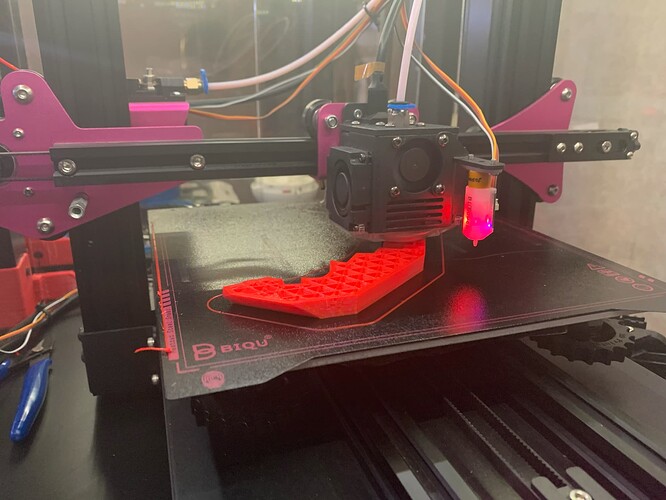 My Ender Extender 400XL — with a Micro-Swiss extruder & hot end, custom printed cooling shroud, CRTouch, and glass bed. Second of only 2 printers in the house with a 0.6 nozzle: 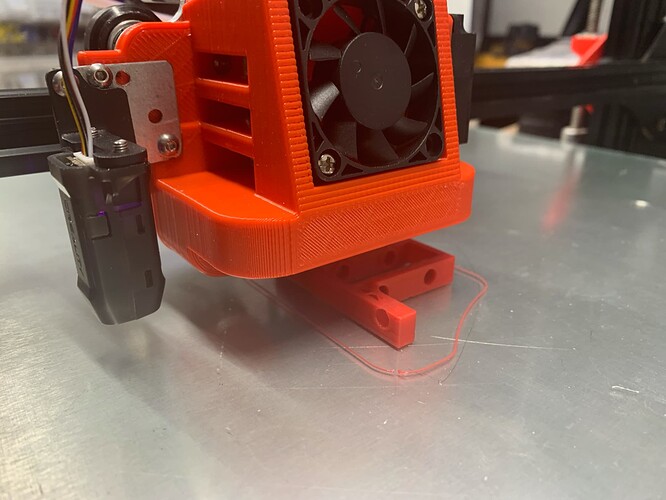 Another shot of the BIQU B1 mentioned above, working on the Core: 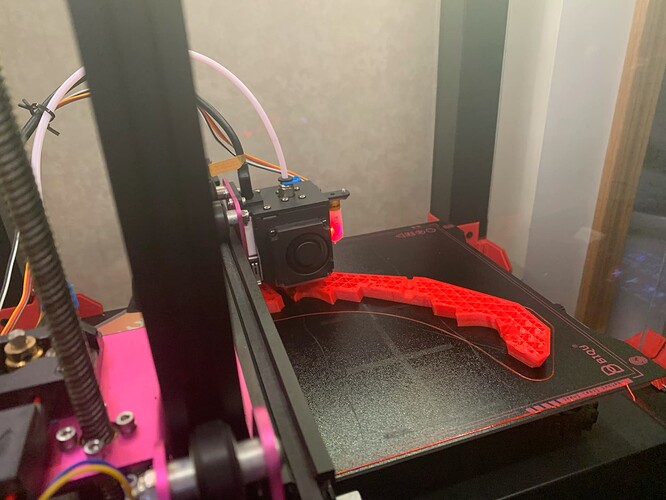 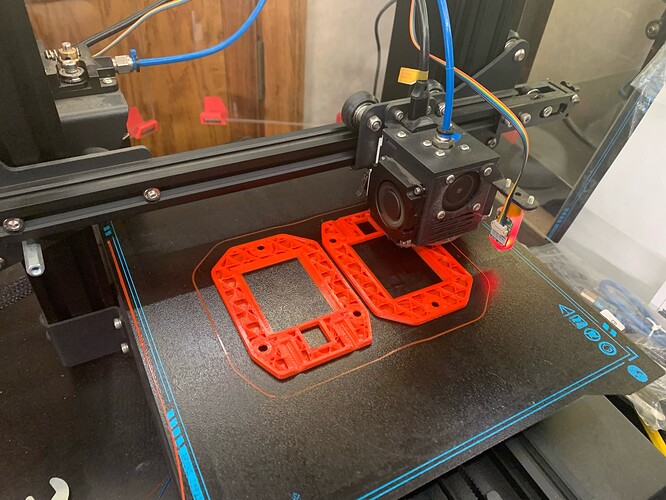 Another shot of the BIQU B1 mentioned above, working on the Core. 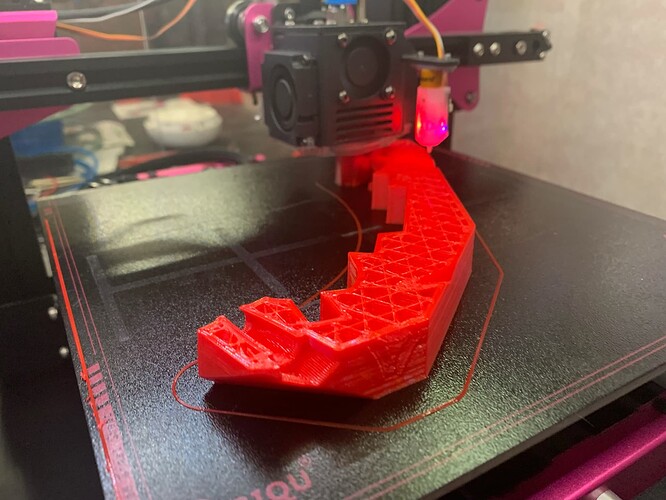 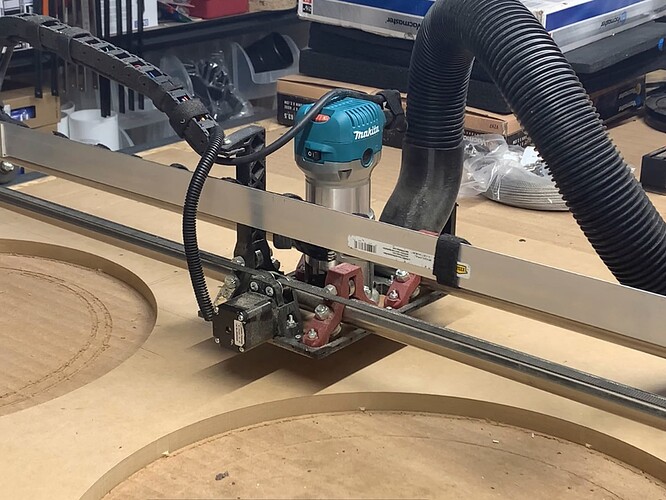 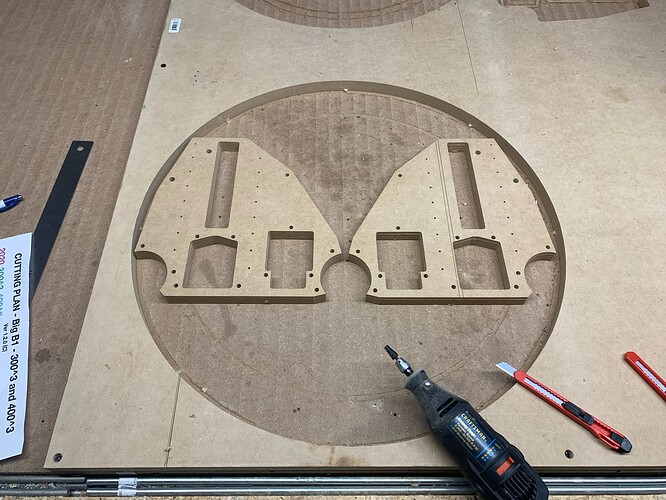 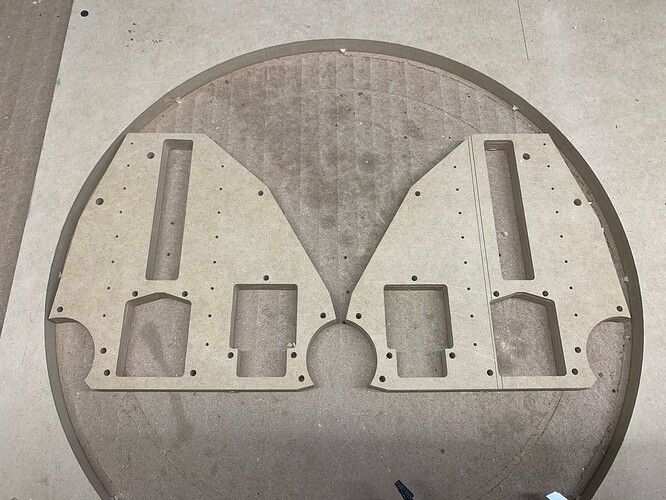 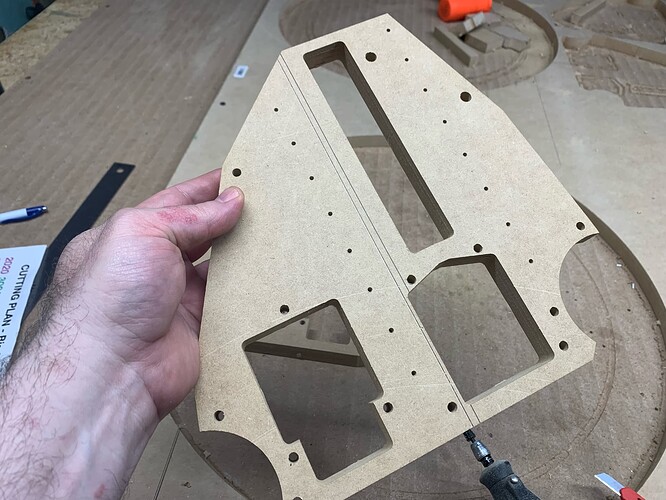 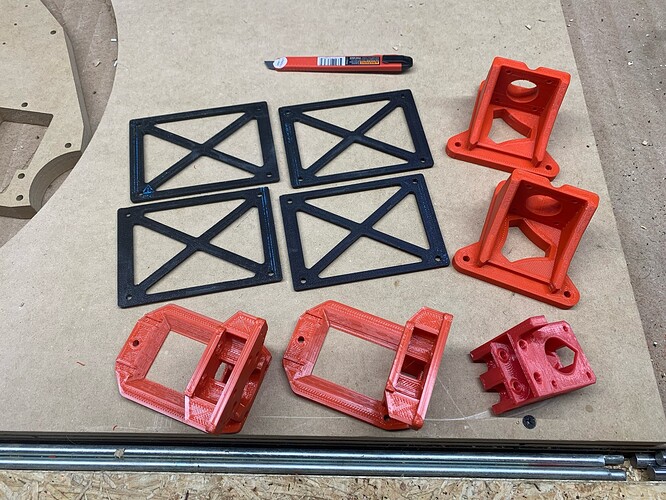 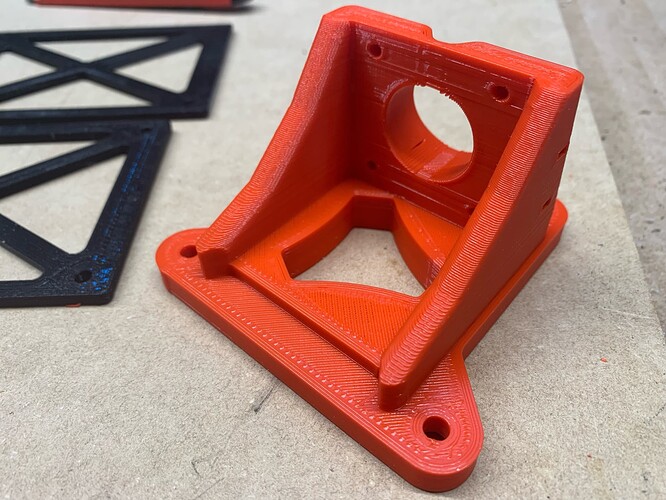 For those tiny 2.5mm holes, I used a small drill bit in the LR2! Don’t laugh, it worked!

@vicious1
The LR Core is one of the most handsome bits of 3D modeling I’ve seen anywhere.
And you did some cool design skill magic with the “xz-plate-left” and “xz-plate-right” (the files I somehow overlooked). I’m so motivated to get operational that I’m printing them in PLA even though I already ordered the milled aluminum ones, just to speed up getting converted. So, I was watching them print, and thinking, “Ryan must have hidden some internal strengthening in these parts for them to print this way.” The design was internally interacting with how the slicer generated the infill. Cool stuff. 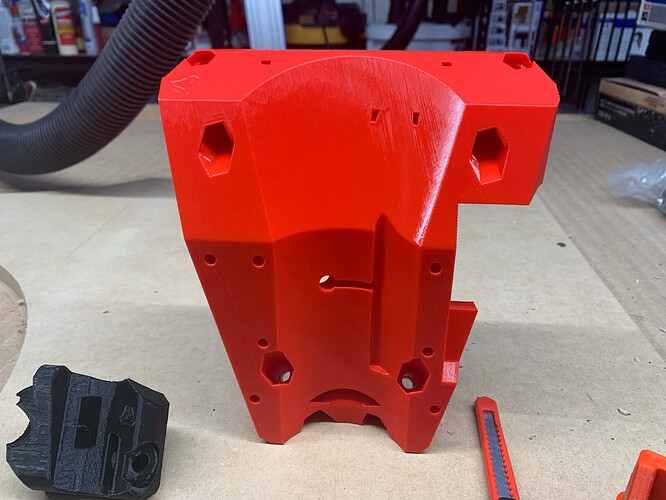 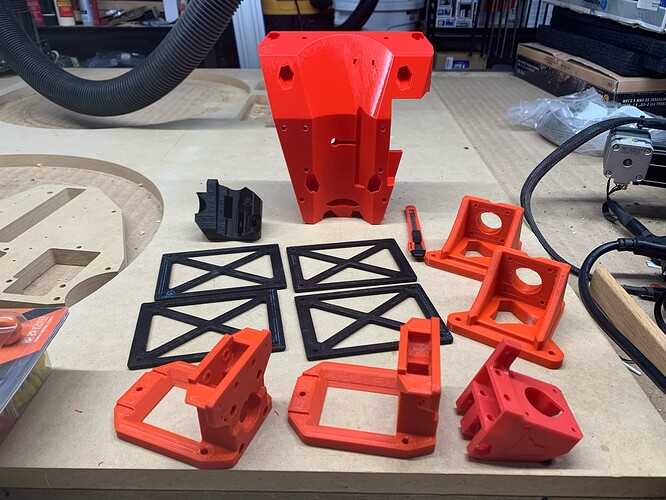 It is a bit of a printer test piece as well, looks like you are dialed in pretty well.

Thanks for all the kindness.

Heh, when I saw that pic of the plates, my first thought was “did he pocket out the plates???”.

Could you share what’s been remixed or changed? Doubting a lot on dumbing my 98% finished LR2 to make an LR3, so it seems a good thing to understand what modifications are been done and why

Sure. I’m not at home right now but I’ll share an illustration when I get back home. My change was merely cosmetic. I adjusted one of the angles to align a bit more closely with the original part’s appearance.

In the attached image, the light gray is the original part, the darker lines are the lines of @SupraGuy’s “Tall YZ Plate," and the red line is @SupraGuy’s version, while the blue line shows my cosmetic tweak.

It makes no functional difference, and it’s debatable whether it actually succeeds at “aligning a bit more closely with the original part’s appearance.” 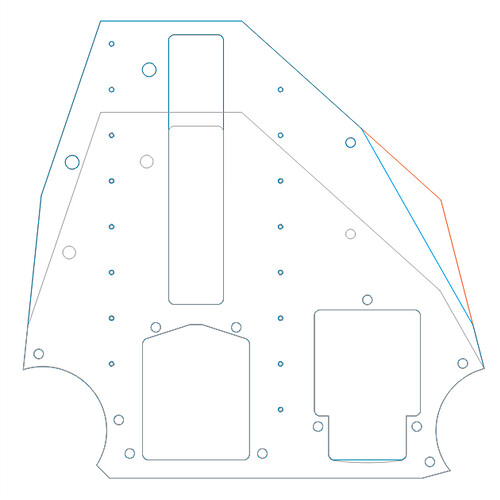 Hey, Dan, I just noticed (because of overlay) this slight difference between the current “original” part (light gray) your “tall” remix version. Is that lack of curve in your version going to have any impact on me?

Mine was based off of a late beta stage of the part. I missed that little update. I think someone might have needed a little bit of extra space there, but it hasn’t given me any trouble, and I have the current released Y drive in that spot.

Obviously, it won’t hurt to update it, either.

My Ender Extender 400XL is so huge I had SIX (6) of the “brace-23p4” part laid out for a single print run, then thought rather than risk six at once, I would only risk four at once, as shown here! 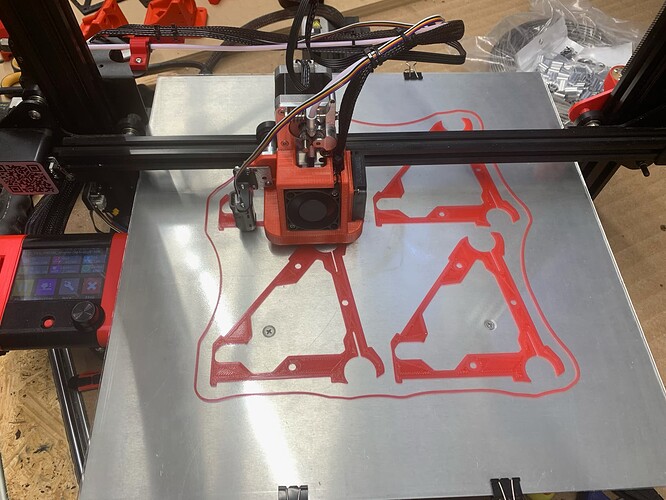 This is what the Cura slice job looked like when I had six at once — with room to spare at the edges. 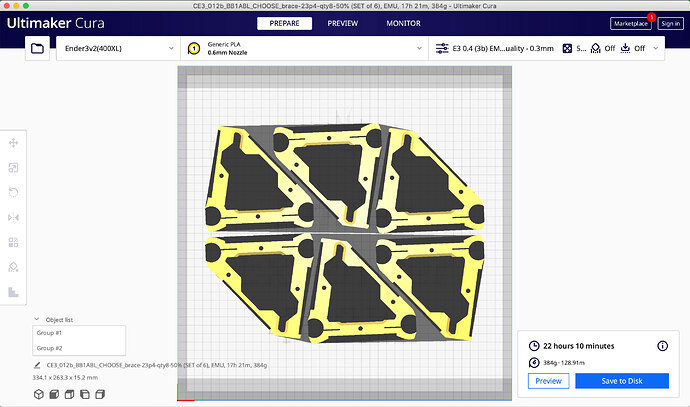 For a sense of scale, here’s the BIQU B1, with a 235x235 print bed normally thought of as quite generous, with only one of the same part on it! 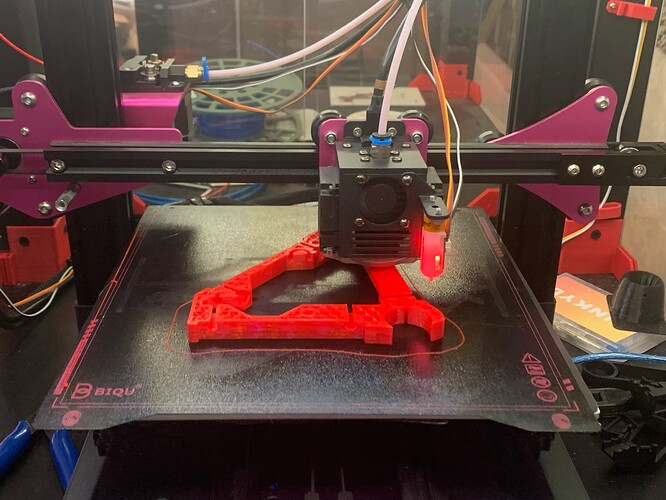 Finally, here’s another shot of my growing bevy of printed LR3 parts, which does not show a bunch of parts getting near completion on a variety of printers — all the hangers will soon be done, as well as the rest of the tension blocks and all the rail blocks. 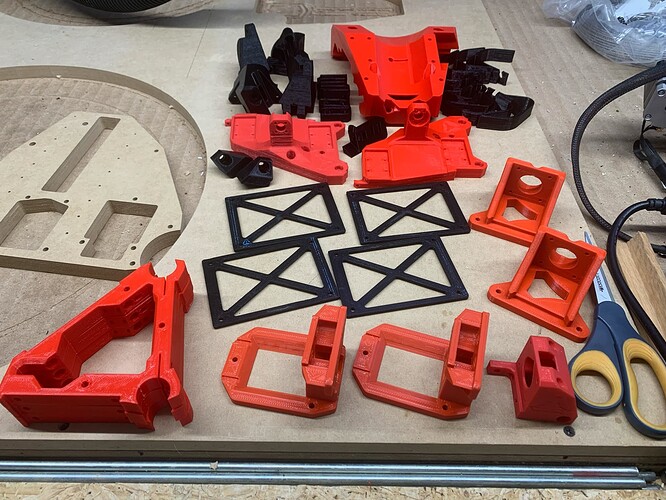 (I suffered some intermittent blockages on the Micro-Swiss on the Ender Extender that have resulted in under extrusion, and so there were some wasted partial prints, but the one part shown above that was affected, I’m going to try to use because it’s only temporary until my milled aluminum replacement from V1 arrives.)

@vicious1
I have a 2.5" vac hose with a Makita router, so I plan on remixing the Makita 700 Series Mount and removable dust shoe for the LowRider 3 CNC, and my understanding is it is OK for me to post that remix.

Speaking of which, I think that is all that remains of my printed parts list, except the last 4 braces that are almost done printing on the Ender Extender 400XL. Here’s my latest pics of the bevy of printed parts: 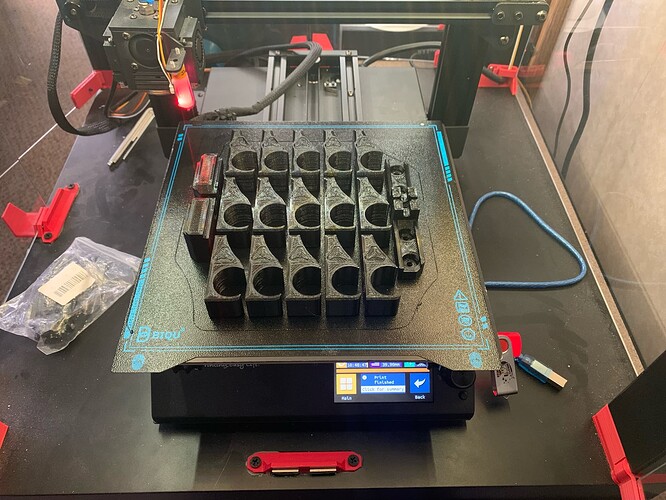 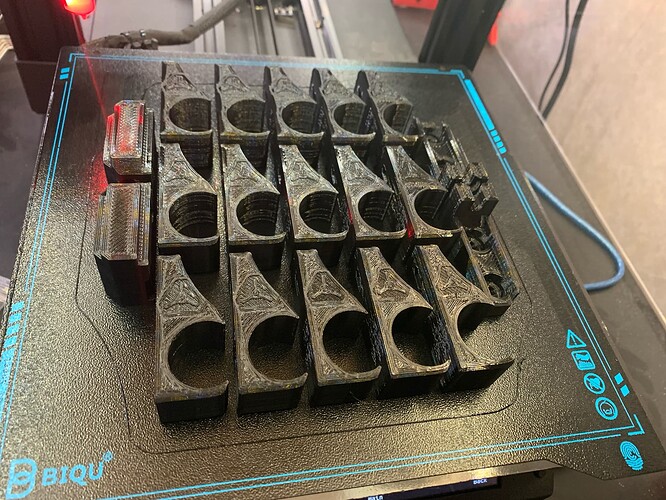 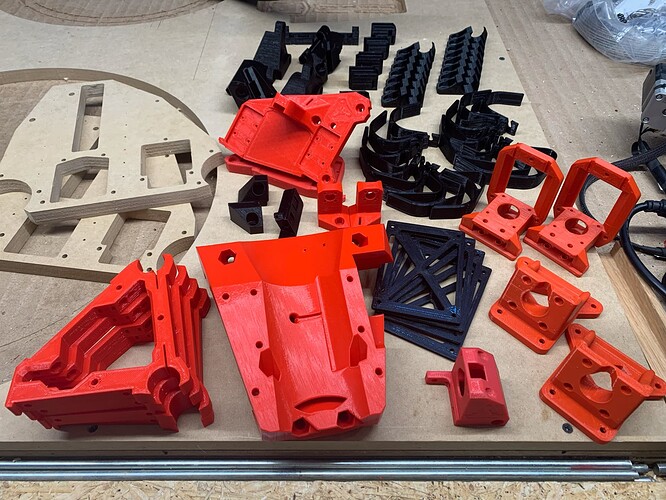 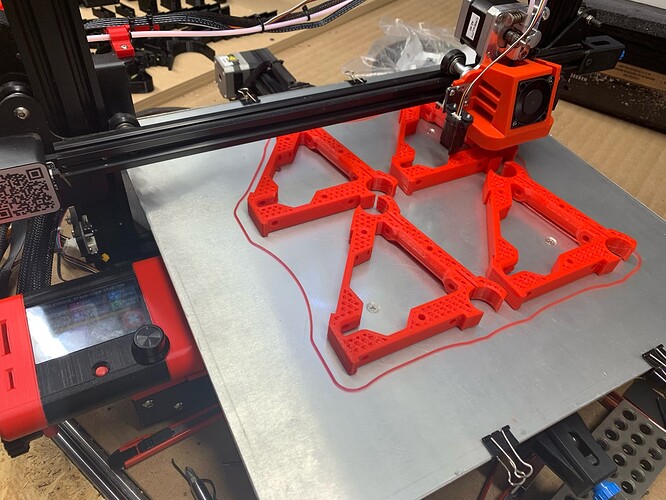 In the attached image

Thanks!
Your build is coming along very quickly:)

and my understanding is it is OK for me to post that remix.

Yes. If it is super close to looking/functioning like mine, please use the same license.

How are you going to fit it under the board box?

please use the same license

Will do! I am happy to show it to you first privately to make sure it meets your approval.

How are you going to fit it under the board box?

I was actually not far enough along to realize there are control box ramifications. My own setup has the vac hose coming down from above, instead of coming up from below. However, I will look into the control box set up and see if I can figure something out for anyone who has a 2.5" hose and it’s coming from below. My hose is from a Vacmaster shop vac, although I have interchangeably used it with both the shop vac and my 4" dust collection system. Mostly the latter. Both have come from above.

Will do! I am happy to show it to you first privately to make sure it meets your approval.

I’m not worried about it at all.