Carving bamboo at 100mm/sec! Another dinner plate on the portable MPCNC

I have finished the upgrades and calibration of my Portable Primo MPCNC, and let it fly through a very dense bamboo cutting board I had in my scraps pile, to make an elliptical dinner plate.

My machine can now move much faster, over 200mm/sec in X and Y and over 40mm/sec in Z, thanks to being controlled by a Teensy 4.1 on the grblHAL breakout board by Phil Barrett. I upgraded it to 40 V powering the TB6600 stepper drivers. 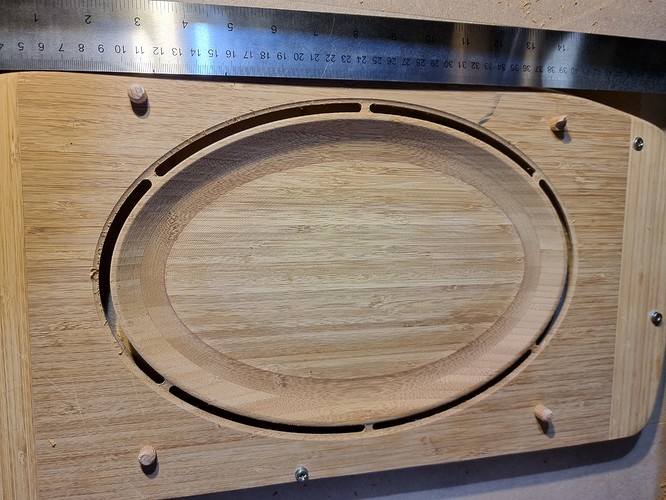 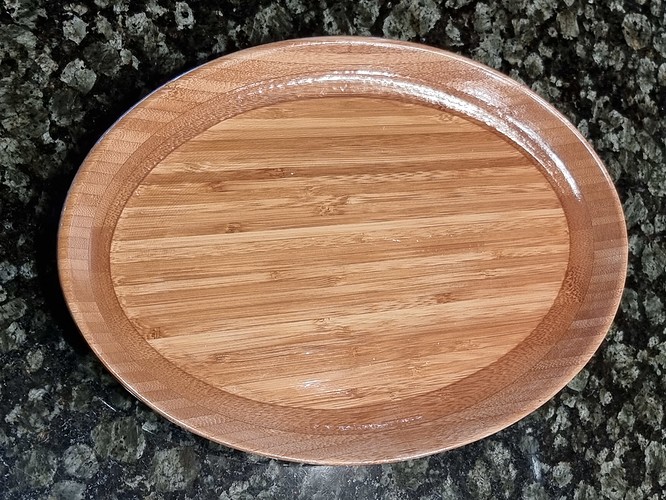 I designed this plate in VcarvePro using the moulding toolpath. This wood is much harder than my previous acacia dinner plate, but the MPCNC did not show any signs of being pushed too fast, even at 100mm/sec with 6.2mm depth of cut.

For those of you who enjoy watching the chips fly, I am sharing my project video album on Google Photos. The videos are not edited and are all playing at actual speed. You can find captions to the slide/video show if you click the i with a circle around it. Photos and videos of the whole carving process: https://photos.app.goo.gl/ZUGgq4PokTSQPeYD9

I am one of those who can’t not watch the video of a Cnc in action. Thanks for sharing! Like how you got the speed up for those passes with the ball end.

I did notice the rapid back and forth to home before each gcode, and it actually hit the stock once doing that. Do you know why your rig does that? Usually it is cam doing that, but grbl does have start and end gcode too. I got lucky early on when that happened as well and did not break a bit, but found out why and fixed it soon after as I imagined a clamp would be my next victim.

Your rig is flying now!

The plate looks incredibly classy. The layers and the depths are fantastically in sync. So good.

Good observation. I made sure rapids would clear the stock and screws, but not the wooden pegs. It went through one like air!

I have some setting to start and end at the origin in VcarvePro. I find it helpful to see if I have lost steps or forgot to home the machine properly before it starts cutting.

I upgraded it to 40 V powering the TB6600 stepper drivers.

How did you configure the last three dip switches for the drivers? Did you choose the highest setting, or is that too much for the steppers?

How did you configure the last three dip switches for the drivers? Did you choose the highest setting, or is that too much for the steppers?

Yes, that would overheat them. I use 1.5A, On On Off, and bolted heatsinks to the top of the steppers.

I am using a different controller for Z stepper, the TMC2160, which has more protections. This stepper has a water cooling heatsink strapped to it. (tapping into the spindle’s cooling system) 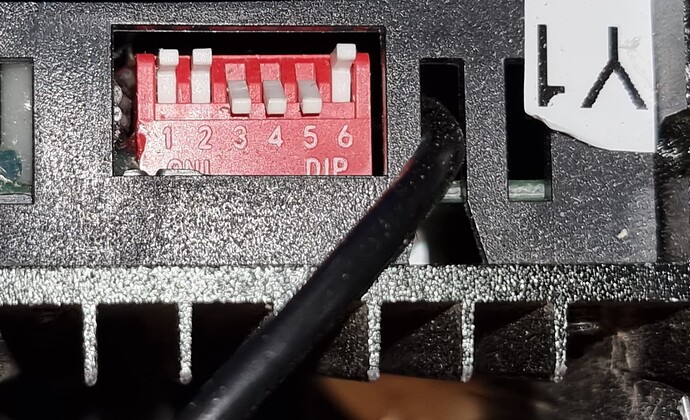 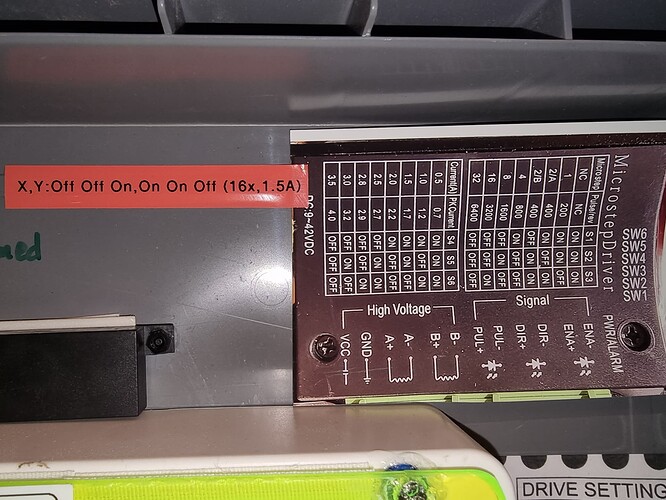 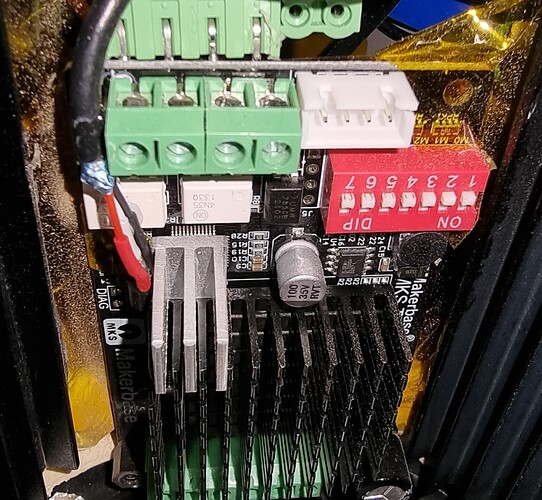 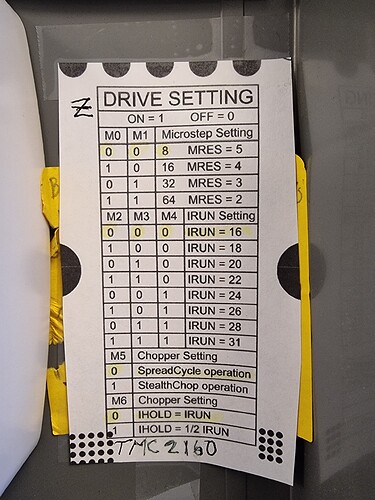 Okay, thanks for this extensive answer.

Same as me then. I run them at 32x though, would 16x give them more torque?

would 16x give them more torque?

I think so but I am not sure. I use the lowest number of microsteps that makes sense. If a microstep is less than 10 micrometers, it seems pointless to me.

it seems pointless to me.

In more practical terms, you can go faster (in mm/s) by using fewer microsteps, if you are limited by the clock rate of your controller board sending out the pulses. If you are using an Arduino Mega (13MHz) this is a real issue. For the Teensy 4.1 or ESP32, it is probably a non-issue.

Hey Steve, thanks for the input. Granted, this is from 2003, but seems true still: 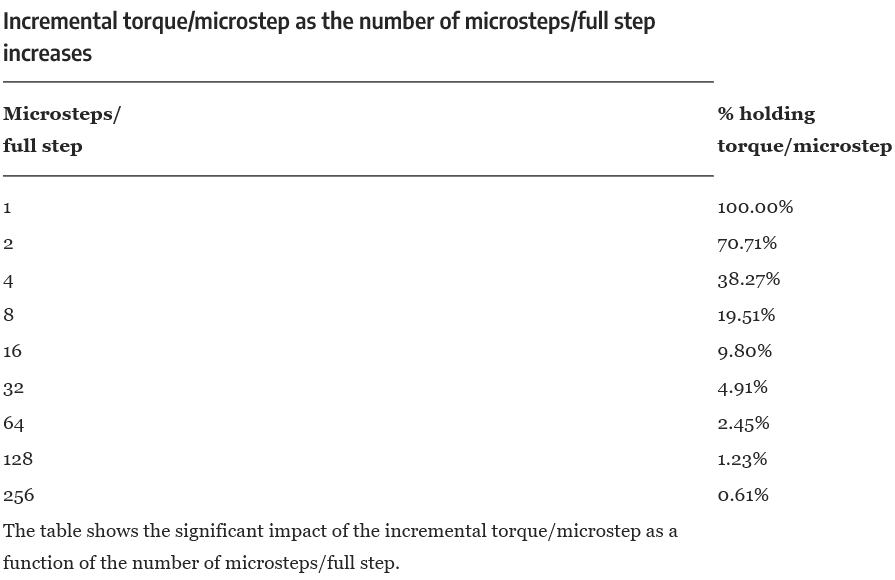 /edit: This one goes into more detail: https://www.faulhaber.com/fileadmin/user_upload_global/support/MC_Support/Motors/AppNotes/Faulhaber_AN015_EN.pdf

You might want to look up a torque test. Those charts are all over the place but real world tests seem to show otherwise. This comes up from time to time. I do believe what you are actually looking at is one step at that size, not real world use at that resolution.

Can you use less steps/mm, sure, but I doubt there is any real world significance in our case. We played with it and I did not see any reason to do so. I would jump all over a free upgrade.

Hmm, interesting and good to know. I ran my Primo with those settings for 2.5 years. When I tried to do 20 000mm/min the drivers skipped steps though and I was thinking it might not if I used 16x. I don’t know at all if that matters and I don’t want to use that speed regularly, I just thought about it and wanted to try to achieve it.
I now have the settings at 8000mm/min as max and movement with inertia dialed down to 40%, up from 3000 and 85%. This works well without the table shuddering when moving.

I would just like to know where the limit is.

For that you can look up the RPM torque curve. What you just showed is a holding or possibly single step torque.

When doing rapid tests make sure at some point you touch the gantry while it is moving to see if there is any power left. I can fly mine around but any tiny slightest touch causes it to let go. So I dialed it back. I prefer reliability rather than save a few seconds with rapids.

When doing rapid tests make sure at some point you touch the gantry while it is moving to see if there is any power left.

Thanks, that’s a good tip.

And thanks to you @stevempotter for setting the bar so high.

I really like to play aroun with that thing.

That chart is completely misleading or misunderstood.

A quarter step does that same thing at full and half steps. But it sends 38% to one loop and 92% to the other.

The math is pretty simple:

This chart only shows coil A current. It doesn’t show you coil B current.

That still doesn’t tell the whole story though. Because as you are cycling through the microsteps, you are slowly moving between those values. So the 16 microsteps you would take between two whole steps look like this:

Half of those values are exactly the same as the 1/8th microsteps sequence. It is just trying to smoothly transition from being aligned with one magnet face to being aligned with the other. Newer drivers, like the TMC 2209s we use on the skr pro actually move at 1/256 microstep resolution, but only take 1/16 microsteps input. They are cycling fast enough to interpolate between the input steps, and generate even smoother transitions between the 1/16 microsteps without having to bog down the microcontroller.

You could argue that you won’t see the difference between 1/16th and 1/32nd microsteps. You could argue that the flex of the motor shaft (and the bit and everything else in between) cause errors much larger than 1/16th of a whole step. But arguing that you lose torque with higher resolution microstepping is a myth.

We need a mic drop icon.

Thanks so much Jeff, this wasn’t in any of those things I read.

That was so thorough I think I will start a new FAQ page just to add that. I bookmarked it.