Please let me start by saying I searched the forum for this topic or an answer prior to posting this. If I missed the topic, my apologies.

That said, I see a lot of MPCNC builds everywhere that have added fans to their stepper motors. My question is, do they really get hot enough during use to cause issues with the PLA? OR, is it a cool factor add on? I completely understand the cool factor 100%. I am running all the wires this weekend and if I need to throw in some spares for fans, I will. I just want to know if this is a documented need?

Also, if heat is an issue, wouldn’t heat sinks and thermal paste work as well?

If I do this, I will probably to both, because, why not.

I see a lot of MPCNC builds everywhere that have added fans to their stepper motors.

I think you may be confusing caps with fans. Some people put caps on their steppers. They say the caps keep the dust out of the bearing, but I think it is just as much about how they look. I’ve read a couple of forum posts about fans on steppers, but I don’t remember ever seeing a picture.

In V1 maintained Marlin firmware, the stepper current settings are conservative, and therefore steppers run well below their maximum temperature. The conservative settings and lower temperature are more about keeping the heat away from the PLA plastic than protecting the steppers. I’m not sure how much fans will help in keeping the heat away from the plastic. Fans might make sense if you were going to be running your machine in a hotter environment.

With stepper current set too high, the stepper drivers can overheat and go into thermal shutdown to protect themselves (still ruins the job). In all cases I’ve seen, this happens first, long before the motor gets too hot for PLA.

Even with fans for stepper drivers, allowing higher current, the motors don’t get excessively hot.

I recommend fans for stepper drivers, because thermal shutdown is a bad day, so anything that can reduce the chance is a good idea IMO.

Yeah, I have cooling in my box for the stepper drivers, I just have been seeing several rigs with fans on the motors themselves. Just curious.

As Robert said, it’s very rare. Can you link to one so I know what you’re referring to?

We have chips! Well foam chips anyway! I am going to callthe build “complete” though from having 3d printers there really is no such thing but it’s cutting and mechanicals seem sound! I still need to check the squareness. surface the spoilboard and I can already tellI’m going to want a dust management. I already have a shop vac and am thinking I just find a mount and modify if needed to hook that up. I cut the foam outside so no big deal but it still gets everywhere! I’m really liking … Just off the top of my head

Please let me start by saying I searched the forum for this topic or an answer prior to posting this. If I missed the topic, my apologies.

We don’t shame people here for asking questions that have already been answered. Searching first helps everyone. But not everyone searches first, and that’s ok.

Thanks for the links. Seems fans are not as rare as I thought.

I still think they are overkill.

The link you posted does not have cooling for the steppers, does it? There are stickers on the motors, that’s it. Or am I missing something?

He has got them, yes, but the other link does not. 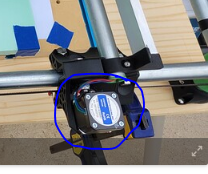 That’s not a fan.

That’s just a sticker on the motor.

Ahhhh!!! I feel dumb, well, never mind. The one in the video is next level x 2 anyway.

An earlier post in @kwledbetter 's thread did have fans:

So maybe you linked to the wrong post @ScrapheapInd

You don’t have to feel dumb any more.

V1 has the politest disagreements on the Internet.

Ya i was trying to trick everyone. No really i just took them off for now as the motors are not even warm but i have only done minures long prints. Once i get into hours i may reassess.

I’ve installed fan’s on mine, although I come from a place of zero CNC experience… and haven’t even started producing any chips yet.

I saw and read comments about steppers skipping, thermal shutdown and melting PLA, much of which has now been explained to me as unlikely. However, before that I decided to take advantage of my control board having multiple fan outputs, and run the wiring from the beginning. I’m also planning to enclose the work area, so wanted to preempt any issues given the minor cost increase.