So a couple of years ago I cut this on the burly. 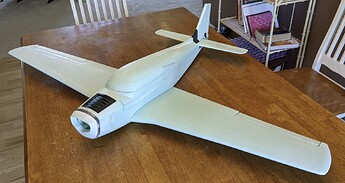 both (Left and Right) wings are top and bottom halves (2 sided cuts) with a wood structure in side. 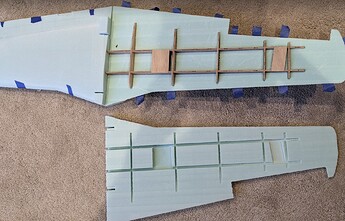 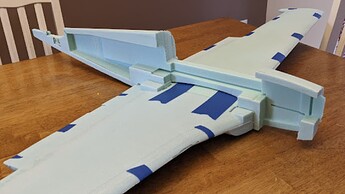 and…it did not fly well.

So on to the next one.
Currently modeling a P-47 razorback.
52" wingspan 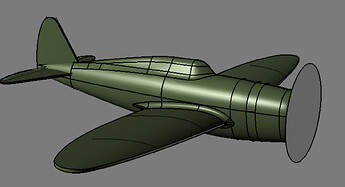 the first plane I cut from a full block of foam.
This one I’m planning to start off with a series of 1" 2D sections 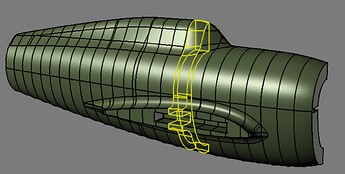 image1796×908 87 KB
this will result in a stepped appearance and will simply carve off the stepping.
Should significantly reduce cut time.

On the inside I plan to have a groove cut that will allow for alignment of each section. 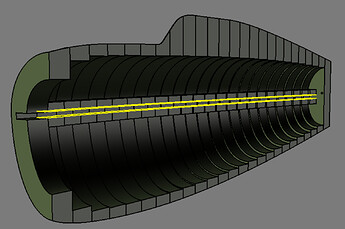 I’ll cut a jig that the sections will fit over using the groove
this jig can be fixed and used for both halves. 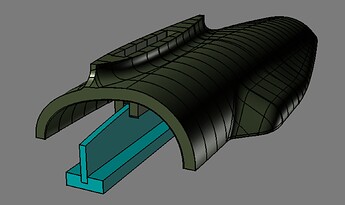 This time for the wings I plan to cut as a single piece 2 sided cut (left and right wing). No wood structure. I’m going to make a thin fiberglass strut that will fit into a thin groove cut into the bottom.

the tail section will also be a single part, 2 sided cut.
the horizontal stabilizer with slide through a hole cut in the tail. 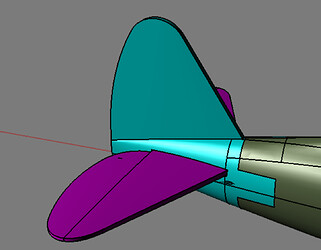 Ohhhh, now I get it. I am fairly certain if you make it a 3D slice you can just waterline cut the outside, not over the top it would be much faster than full 3D. Kinda like reverse spiral vase mode in 3D printing. So a 2D hole/pocket in the middle and a waterline around the outside. That should give you a piece fully formed to stack together. This will be the first time I say this but fusion CAM might be easier for this.

Or yes you can probably just quickly sand it into shape from a 2D stepped shape.

Super interesting. I never really thought about a hollow 3D shape. It looks like you have a very efficient workflow. It should also be pretty fun, a couple piece s in you will know how well it works so you would not have to waste ton of time if something was off.

Always impressed by the projects RC plane and drone hobbyists get into. What a cool pastime. Nice work.

It’s been many years since I abandoned RC planes as a hobby due to time constraints. I’ll be following along and hoping you post progress pics!

Yeah, Fusion has a lot of different 3D toolpaths to choose from When I get to that point I think the 3D contour path will be what I want. Less back and forth over the top.

There is a lot of fun stuff in RC. FPV flying is a blast.
I bought the MPCNC specifically to make RC planes.

I’ll be following along and hoping you post progress pics!

Awesome. I will try to be more diligent getting images posted than I was with the last plane.

I’ve been into rc for 30yrs… taking an occasional few year haitus then returning to the hobby as life permits. Designing/building rc aircraft was the main motivation for my building my primo… but it still is waiting for me to get back into rc. I’ve only done a handful of personal design/builds, but all the hard way (hand tools, balsa, fiberglass, etc). Running some 3d foam, or lasering some balsa parts is very exciting stuff for me… having so much control over the airfoil, washout, etc… makes it possible to create some really sweet flying designs. I learned xflr but never used it in practice with my models… the cnc is going to change that.

Your previous build looks beautiful. Too bad it’s ended the way it did; all part of the hobby, but wish it wasn’t lol. I’ll be following this… and wishing you the best of luck on the maiden. Keep it nose heavy this time, hehe.

[edit: Are you also at RCG? Here’s my aging blog:

I did a number of my “needle cutter”-related posts over on RCG… but haven’t been over there much, since I’ve gotten out of the needle-cutter “business”. It was fun while it lasted…

OMG, when Springer mentioned the BluBaby, that almost brought a tear to my eye. Tony was an awesome designer and community member, god rest his soul.

Your previous build looks beautiful. Too bad it’s ended the way it did; all part of the hobby, but wish it wasn’t lol.

Thanks, and Yep, that is definitely how the hobby goes, especially with home build stuff.
I am on RCgroups but not much.

I did a number of my “needle cutter”-related posts over on RCG… but haven’t been over there much, since I’ve gotten out of the needle-cutter “business”. It was fun while it lasted…

I absolutely love my needle cutter. Once I got it dialed in where I’m not either breaking or throwing a needle and it works great for FT planes. I still fly a bunch of those, and by a bunch I mean fly and crash and rebuild :). I’d rather crash a FT plane then a $300 production one.

Is there anything you haven’t done yet?

Tons. But, even as slow as I am, you still may accomplish a few things in 76 years, even if by accident…

I absolutely love my needle cutter. Once I got it dialed in where I’m not either breaking or throwing a needle and it works great for FT planes. I still fly a bunch of those, and by a bunch I mean fly and crash and rebuild :). I’d rather crash a FT plane then a $300 production one.

I’m absolutely thrilled to hear this. I detested hand-cutting the RCPowers and FT planes my late fishing/flying buddy and I would fly in my pasture. But since I was getting pretty heavily into CNC (BuildYourCNC and LinuxCNC) at the time, I started developing a CNC needle cutter to save time and effort in, first, building… and, then, RE-building the planes we’d destroy. Our flying sessions were more like a demolition derby. We’d crash, quickly field repair, and then throw as much as was left of the plane into the air as quickly as possible… until there simply wasn’t anything left to fly. Overnight, I’d cut a couple of new planes (I built my buddy a similar CNC and he’d do the same thing…

) and swap over the electrics that survived. Next day, we’d be at it again. 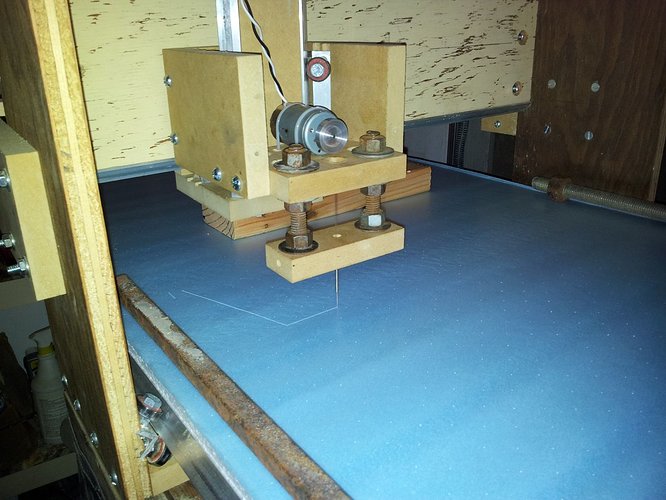 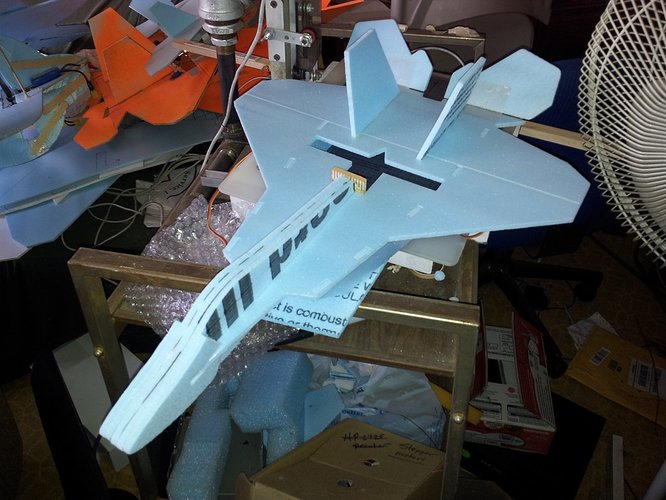 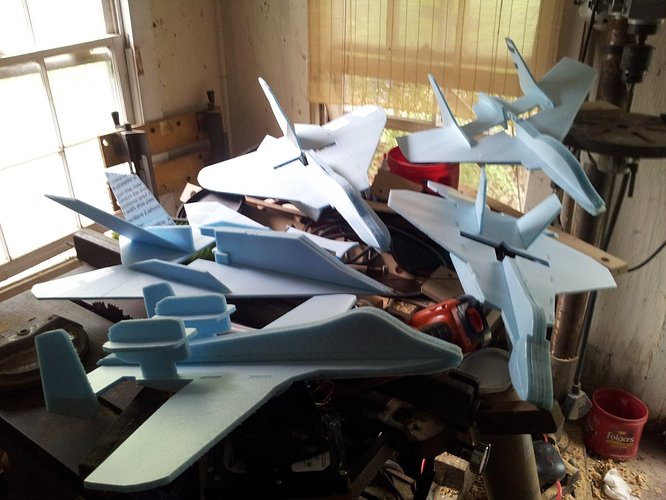 Along the way I “discovered” the MPCNC and it then became the development platform for the needle cutter. Over time, and each armed with a 3’ x 4’ MPCNC, we cut and flew our small stable of planes and had a ball doing it… 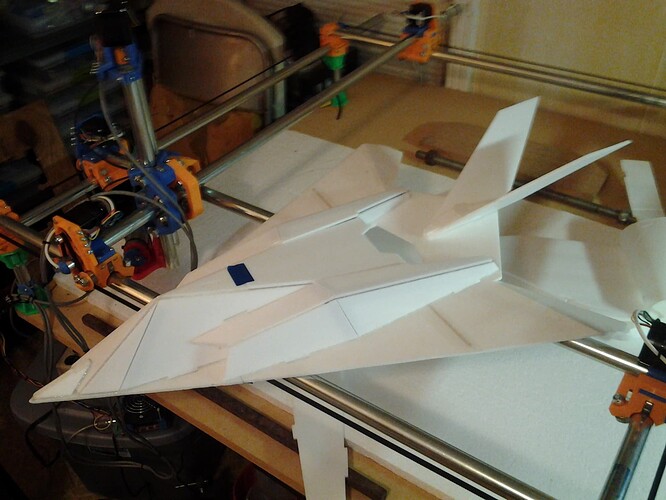 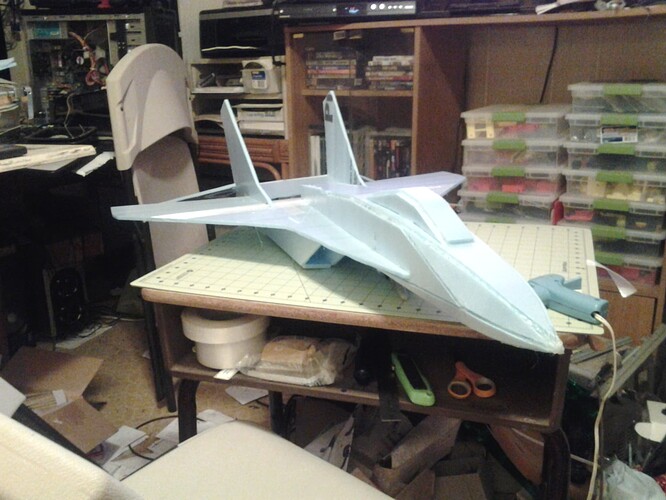 I remember those pictures…still blows my mind. That needle cutter brought in a whole rush of people from that forum. You and Jason.
Look at that mpcnc. That is the 2nd or third minor revision. Built in wire splicing, might have the “better Z” parts. Look at the feet, that is when I still planned on injection molding the machine. Freaking wild feels like yesterday and a million years ago.

I built 3 or 4 of those MPCNC’s early on. No idea why I put such a tall Z-axis on them… 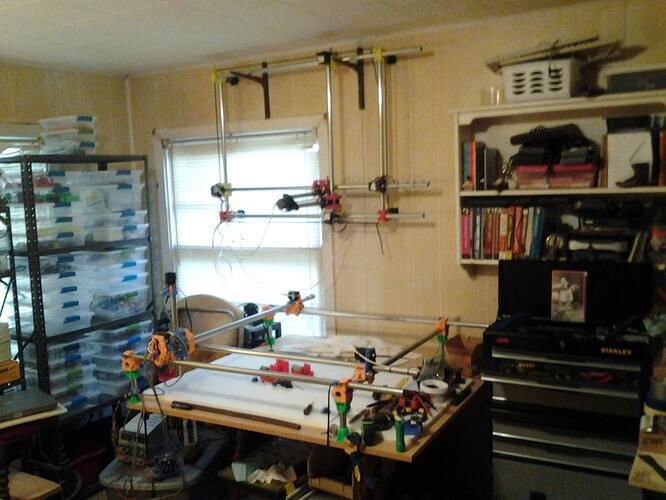 They were flimsy, of course, but served well as needle cutters.