Looking good. The teardrops were for ventilation and fit between the upper and lower portions of the Primo mount. They look pretty but are useless for most of the LowRider mount. As for a lip, I designed a fan mount for the top of my laser tube. I dry fitted a 3D printed version, but have not hooked up the fan. Making the ring a little larger than your tube would give you your lip and a fan mount. 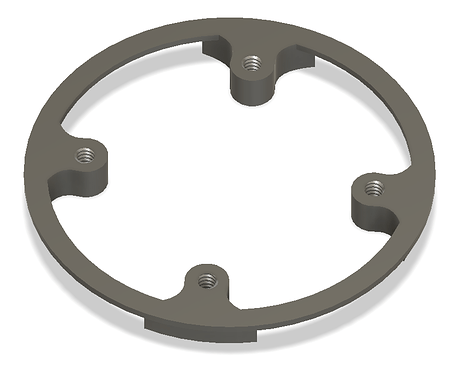 I mostly wanted to make sure I could make the holes (I chose to do a circular pattern and a boolean operation). I am not sure what the right choice is for ventilation. It seems like most of the cool air comes from the top and gets pushed down. I don’t think a side vent will do much, but I did model in the dw611 vent (approx). I could add some holes there.

I still want to trim it down a little. I would like to have less area and volume to print. But I will wait until I see the test piece to decide. I am planning on printing it upside down.

This little test piece might work on it’s own… If I make it bigger, I will make it a little skinnier, because it is pretty tight.

The laser has a friction fit. 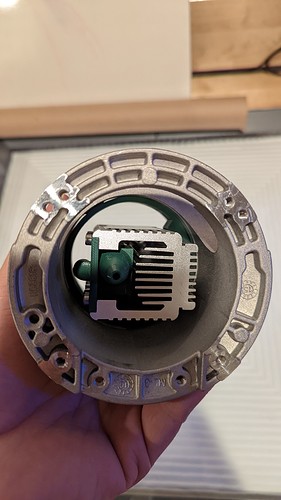 I made the bigger one, and it looks like it will work well.

I added a fan mount (I’m not sure what fan you were designing for, Robert, but I have a lot of 60mm fans from old PC cases).

It fits pretty well. The laser is super tight, but I can get it in there. I just won’t have the fine adjustability that I would have if it was just a tad looser, held with set screws. I added some holes for set screws, but it doesn’t need them on my print.

the laser has arrived so I could try to fit it in the laser mount. It needed some sanding on the inside but after that it is a friction fit!

I also use this air assist nozzle: 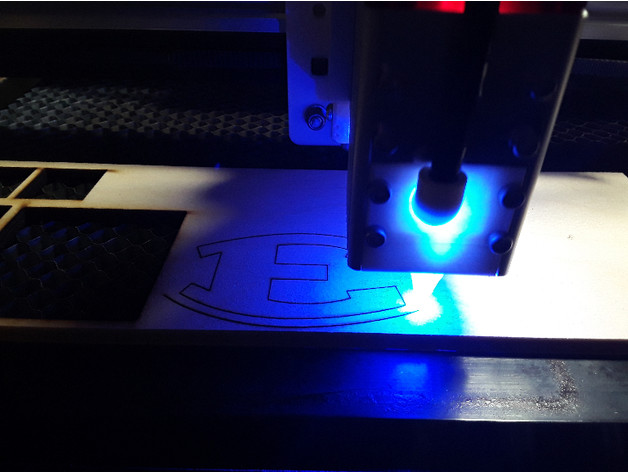 This is a printed air-assist nozzle for the NEJE 30W and 40W "new style" laser modules with the amber/red window. Simply replace the window with the nozzle part and insure the lens assembly is properly fitted into the cone. Attach a 6mm OD air-line...

and it was a close call but it fits 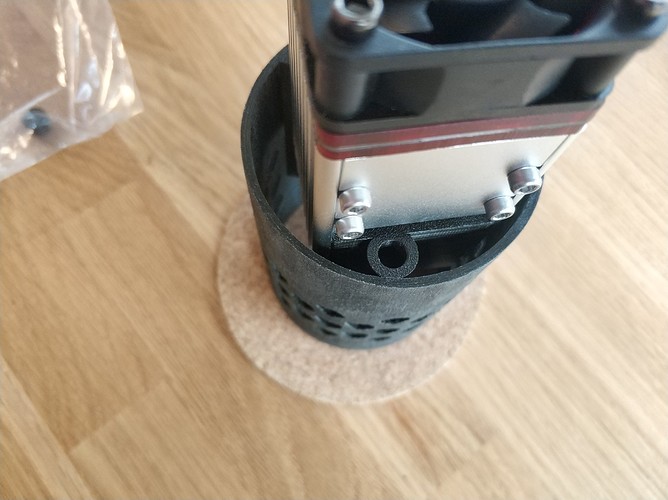 But now I’m wondering if it would all fit in combination with the slot for the locating pin and the gears?

If it all would fit I would really appreciatie if you can modify the mount!

Here is a modified version for the LowRider with a slot for the protrusion and gear teeth. I don’t have the Makita base, so I followed Dan’s Pen mount closely including shape and spacing of the gear teeth and depth of the slots. Thanks @ SupraGuy. I tried to place the slots so the additional mount thickness would not interfere with the laser or the air assist. I also removed the raindrop ventilation since it doesn’t make sense inside of the Makita mount and probably increases print time. If I was working on this for myself, I’d probably print out the first 10mm or 15mm and test it before printing the whole thing.

Edit: It just occurred to me that for the Mikita base, the height might be significantly taller than is required. If so, let me know, and I’ll provide a shorter model. There is no reason to waste the material or the print time. The current height is driven by the spacing of the two halves of the Primo mount.

If the model is the “right way up” then the slot and the gear teeth are in the respective wrong positions. As viewed from the top, the slot is 90° clockwise from the geared teeth. (I can see how you might have mistaken this, since that pen mount prints upside down.)

Thanks for the catch. I’ll fix it this evening. One question I had was the shape of the teeth. If I bisect the teeth, the top half has a different angle than the bottom half. That doesn’t make sense to me, but I don’t know much about gears.

Yeah, I did that because the lower angle was too sharp to print well, and I was getting sag into the hole. The slightly steeper angle on the top printed better and still worked well for the gear teeth. I could probably have used the same angle top and bottom, but the space between teeth was also kind of tight.

Thank you very much @robertbu, you are amazing!

I’m using a online print service, so the advice to do a test piece isn’t a possibility. Let’s just hope this is going to work!

The knob that controls the gear teeth is on the top of the base, so I guess the full height is the best solution.

The previous version, of the laser mount I printed, was a little bit to wide and needed some sanding with a belt sander. I measured my router and the size is 64.8mm. I see your model is 65.0mm. Is it possible to make it a little bit smaller? If that’s to much trouble I will print is as it is and do the sanding.

I measured my router and the size is 64.8mm.

My original model was 65mm. It fits fine into the Primo Makita mount Ryan modeled, though the layer lines made it a bit rough installing and removing. I ended up hand sanding it for 5 minutes so insertion and removal would be smooth, but nothing aggressive like a belt sander, and I’d be concerned about melting rather than abrading using a belt sander on PLA.

I wonder if a AMB 800 FME spindle could feet in that same cylinder…
I also have Neje 40640 and i am looking for an universal tool mount that doesn’t require to unscrew anything when a tool change is needed.

EDIT: I’ve just checked trying to fit my 800 FME in a 65mm Makita base and it doesn’t fit

What mount do you currently use for your AMB 800 FME spindle?

None yet as I just received the spindle for (late) Christmas.
I was thinking to use this one : PrusaPrinters

because it’s a good spindle, but i wouldn’t have choosen that spindle by myself because i think the 43mm attachment ring is a limitation in term of versatiliy but my brother really likes Kress/AMB and i could not ask him to return it for other brand.

I will have to deal with not that easy tool changing.
I hate that as I already ruined 1 of the 2 nut hole of a nut trap trying to remove the upper tool mount and beeing able to remove /destroy completely the nut trap inside the tube was a real pain.

So I printed a thing… 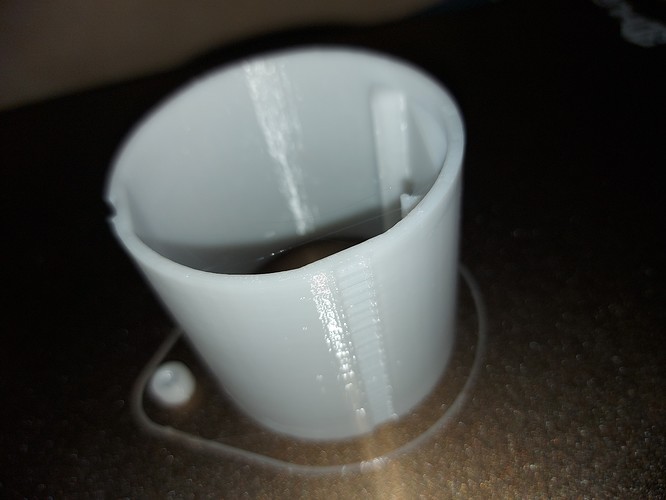 This is the 65mm model, but the top 30mm were chopped off, because it didn’t need to be more than 60mm tall. 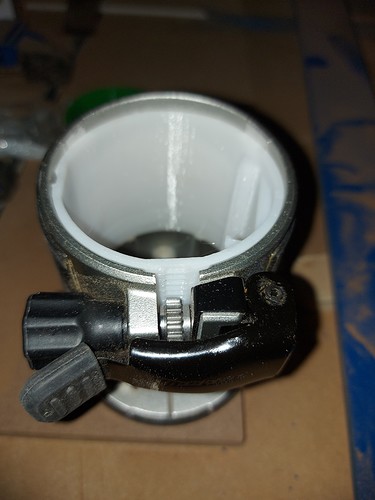 Fits in easily, and when clamped, it is held in place firmly.

I’d have given you bonus points if the set screw had been either 1/4" drive or used an Ikea Allen key wrench, either of which I have in abundance, lol. I might remix it a little, but I can verify that the 65mm model fits in the original Makita mount perfectly.

Eventually, I’ll have the NEJE laser module to put in it. I already have a 5.5W so I’ll hold out for an A40640 to get that 10W cutting, which will make a nice combo with the LR2

I found a solution for 43mm mount ! 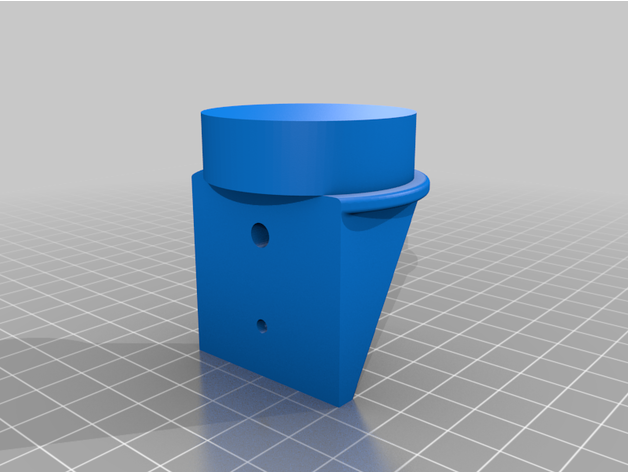 An adapter for easy mounting of Neje laser clamp mount to your CNC machine with standard 43 mm mount.

I might have to adapt it and see how much impact i will have on 0 postionning/end stop, but it is the best idea from now.

I received the 64.7mm version from the 3dprinting store, and it fits perfectly, I didn’t even had to sand it, it is a snug fit. Strange that there is a small different between the same routers.

I’ve ended to design a tool mount from scratch for the Neje A40640 ! 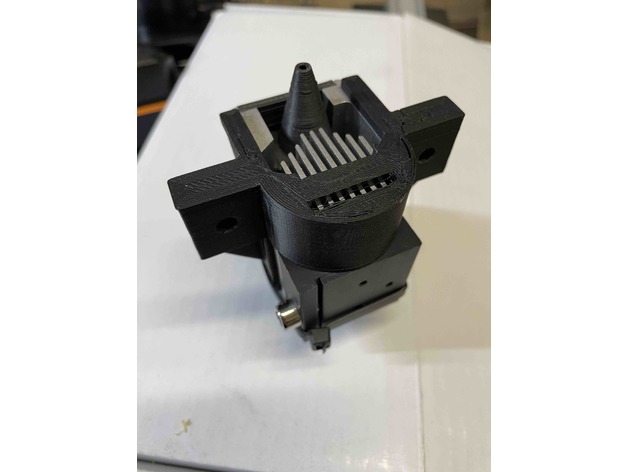 Neje A40640 tool mount for MPCNC Kress 800 FME Tool mount BASE:https://www.thingiverse.com/thing:4882916 Allows to quickly change tool from Spindle to Laser, only 2 screws to remove. Laser will fit with a little force at 0.3 resolution, turn the...

I think it’s the best solution for me regarding the spindle mount i finally chose: 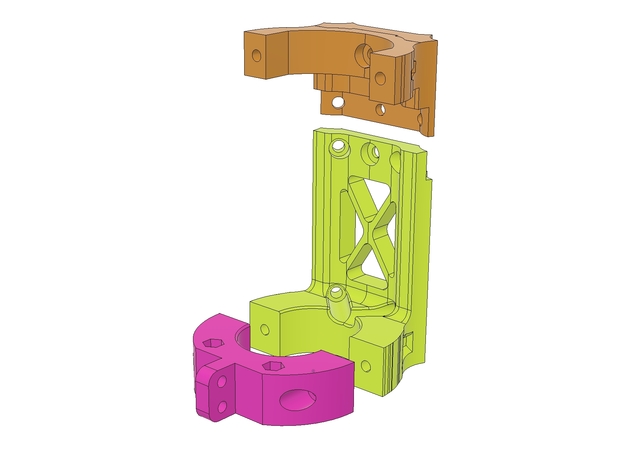 MPCNC Kress 800 FME Tool mount BASE Designed it from start cause i wanted something solid 0.2 layer height 45+ infill SOS on screws need to be button Allen head or they will not fit! see attached photos.