Your router looks to be a Makita clone, but uses ER collets. Can you provide a link to this router?

I took a bit of a gamble as I could not find many reviews.

However from what I have read they have tried to lower the run out of the spindle and incorporated some sort of constant speed control control.

I think the throat is a little slimmer than the Makita - I’m away from home at the moment but before I left, I did print a single clamp from the Makita dust shoe/clamp and it seemed like a sloppy/bad fit

I got a fair way through designing the parts, but as the parts I had to print came out of the printer, I realised that in the past when I was printing parts for the LR2 I was always trying to print as fast as possible, and actually giving the printer some time tends to produce some very solid parts.

The parts are very impressively designed, and any worries I had about rigidity are seem to be unfounded.

I also had some worried about the excess weight of the steel I was adding.

I’m thinking I will choose to go steel for the XZ plates, and PC for the YZ and bracing

Could I get away with 3mm steel? or is 6mm definitely the preferred?

Could I get away with 3mm steel? or is 6mm definitely the preferred?

You can do 3, you will just need new bearing block screws or a lot of washer. The blocks need 3mm, so you have 7mm to play with.

I’d buy it as well, but shipping to Germany is… Ugh… I could basically buy a Kress for it…

I bought 1 in portugal, Ratrig company, cost 241 euro shipping included to belgium. This is a tip for europe, if you want avoid douane taxes. The hardware kit from v1 engineering cost me an extra 176 euro (btw and douane taxes)

The shipping was killer on the router11 to NZ too…I bit the bullet as I had issues with the LR2 and part of it could have been going cheap on the router.

I’ve started assembling today…I ran into a couple of issues.

Firstly I’m using the table that I used for the LR2, I cut down the ends 6 months ago as they were getting in the way, so I’ve attached unistrut rain to each side to give me extra length and extra width.

The original plan was to screw the Y Rail holders into the unistrut, I thought I could flip these 180 degrees and get away with it - unfortunately they interfere with the carriage.

It was probably for the best as even when screwed into the unistrut they weren’t as solid as being screwed directly into the timber.

I ended up welding the rails to the table, using 2mm steel as a spacer. It was nerve wracking, as I only have a arc welder I picked up for $50, so I was worried about warping the rail. A few welds did warp, but I managed to clamp them down and get them straight.

I made a terrible oversight when welding, as I thought I had the rail in the correct place, where the opposite bearings would ride on the opposite unistrut, but I seem to have kicked it over 20mm.

As I was packing up tonight, I realised that I still have a 3050mm 1" SS Rail that I purchased to build Brute71’s Brutus CNC.

The X Rails need to be 1520mm long for the bearings to run on the unistrut, so I think I can still make it work.

Unfortunately I won’t be able to get the thing moving until I put in another order for motors and drivers - another project came up and I had to sacrifice 2x steppers and drivers to make that happen.

You’ll notice I’ve welded 3mm plates onto the unistrut to hold the belts/tensioners/endstops.

The plan is to take the 18mm MDF spoilboard off the table and pocket a flat plane with the CNC. I tried it with the LR2, but only had a 6.35mm bit, so it was going to take a lifetime. This time I have a 25mm surfacing bit, so I’m hoping for the best.

I also notice the table has a huge sag in it, I’m not sure if this is due to time, or the fact the I constructed the table without leg supports when I first made it, but again, I’m crossing my fingers that the unistrut makes this a non-issue. 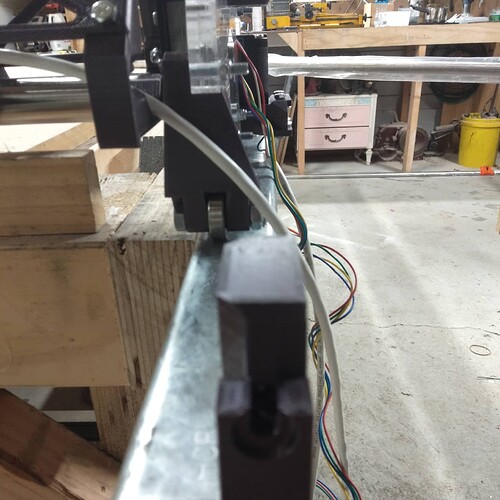 This is the tight space I have to work with to get the bearings and the end stop on the single strut. 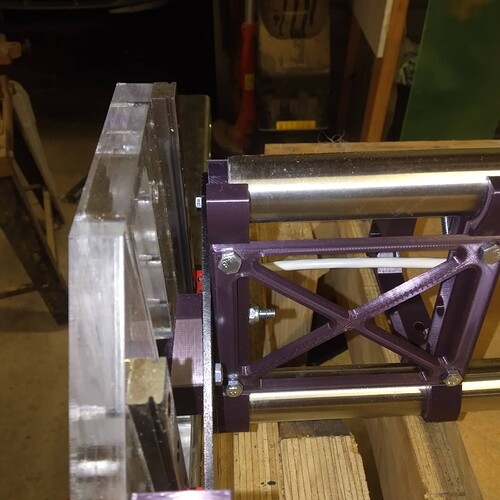 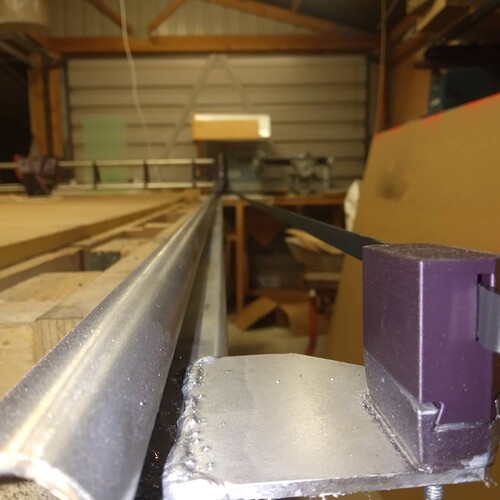 I’m glad I stopped when I did last night!

Came back to it today and realised I could just take a wing off the table.

It’s taken the X rail to 1400mm, which means more rigidity and that I can use a pre-made dxf for the strut, so I’m happy.

Currently it’s all belted up, and loosely wired, I’ve found a couple of chunky NEMA17s for the z axis so hopefully I can get it fired up tomorrow. 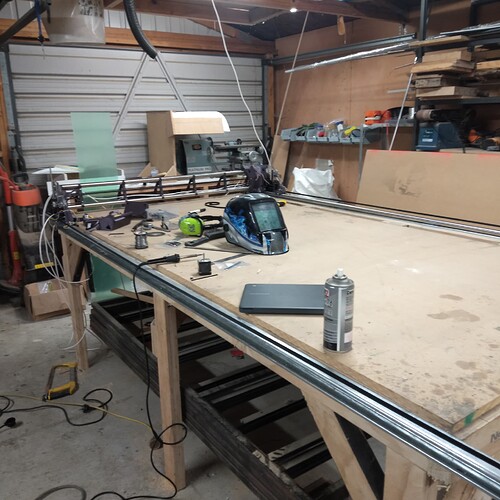 I’m blown away with the design of the LR3 - everything is ncredibly well thought out. The belt holders and tensioners are a joy to work with.

I’m having issues with the LCD bugging out at random.

From what I’ve read on the forums it could be something to do with timing? 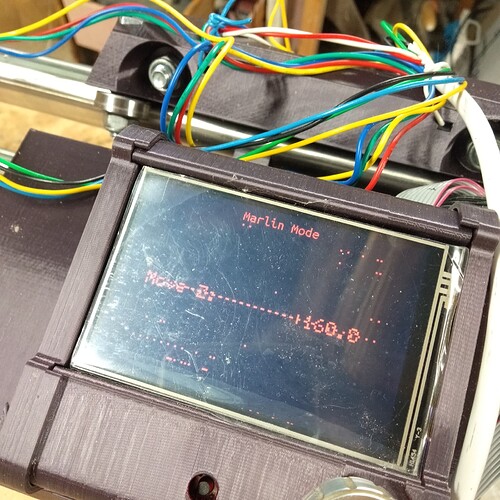 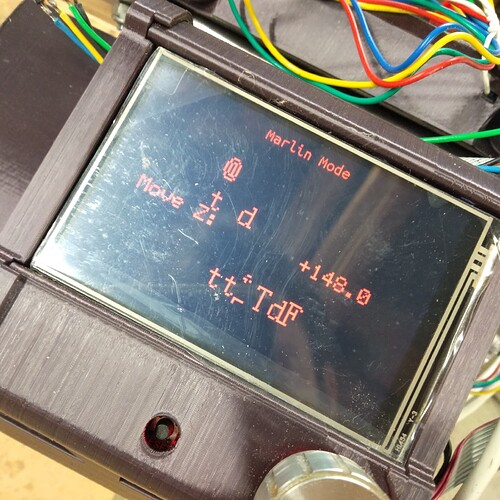 @jjwharris, did you remove the JST plastic shield from the SKR Pro TFT port, before connecting the black cable between SKR and TFT boards? V1E kit’s wire with Dupont connectors make more reliable connections if the SKR’s plastic JST shields are removed first for the ports we’re using. I did NOT remove shields for the grey wires connecting SKR to TFT.

Mentioning because SKR assembly instructions Docs → Control → SKR Pro → Molex and JST connectors talks about removing the JST shields, even has a pic. However, the doc doesn’t explicitly mention, or show that the TFT’s JST shield should be removed as well to help make for a more solid connection. 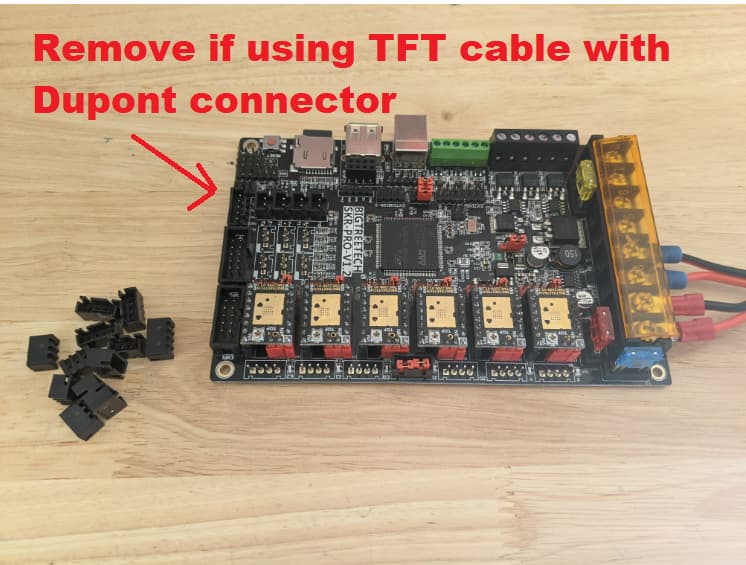 Hope someone from LR3 Beta crew can confirm/correct my understanding.

The shield didn’t really feel like it wanted to come off, but I got it off and am running with no problems!

Thanks for the quick reply.

You’re welcome. Hope it helped. I struggled to remove mine as well at 2am this morning, was questioning my judgement through out. But the Dupont connections felt solid afterwards. Used Jeweler Precision Pliers stolen from my wife, my regular electrician needle nose pliers were way too big and likely to damage the board components.

I’m nearly at the finish line…

Everything seems a lot more rigid, and I seem to be getting faster speeds/less stressful/worrying cuts than I did years ago with the LR1/2…

Aside from cutting the strut plates, I’ve begun surfacing the trusses on my table, it’s a bit of a drag as they seem to vary by 0-6mm, but hopefully this sorts it out. I’m running a toolpath at 2000mm/m, 3mm DOC, with a 25mm surfacing bit.

It’s a real delight to have the endstops, it makes everything much easier, I think I may need to readjust the offsets once the trusses are surfaced, but my initial squaring ended up with 0.5-1mm on the diagonal 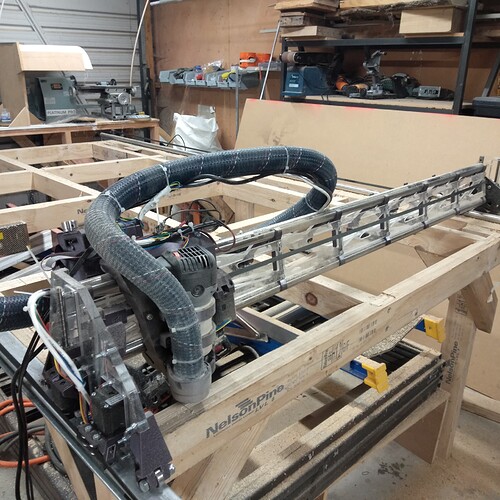 An all-metal beam would be super cool. (And an awesome project for a CNC plasma cutter! hint hint)

That very idea is something I had started pondering on within the past few days, as I started thinking about a plasma cutting table.

I’ll have a read up, but I imagine I should be able to kick the travel speed up, while the cutting speed will be pretty severely reduced since I’m cutting arcs/circles.

A full sheet of record blanks is about 160+ Up/Down Z Movements (Outside diameter, plus centre hole), I figure the Z clearance is probably going to be the big one.

I’ve surfaced the struts of the tables, I’ve put a straight edge over the table, but I’m still not entirely sure how flat the surface is. I could probe the entire surface and map the table, but that could also be a bit of a nightmare.