I got more practice today and am having a bear of a time figuring out how to profile cut or v-carve engrave cursive text. Which sucks, because the wife NEEDS some big cursive room signs for the kids bedrooms. Just can’t seem to get it to work, despite knowing how to do it with Inkscape and Estlcam.

Was able to do this mini monogram in MDF-

Striking out on FB with a question about it to a couple groups and nothing specific I can find in YT.

I’d have thought doing toolpaths on cursive would be super easy considering how popular it is. 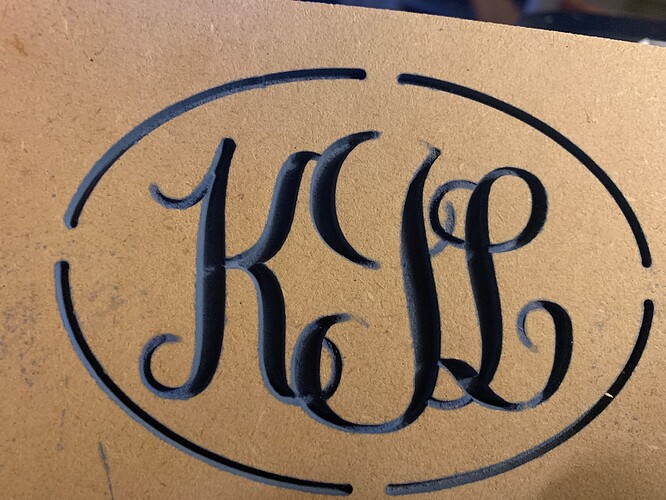 Found this, but I’m not sure what problems your having 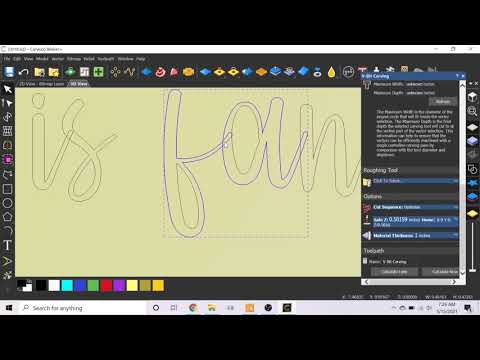 And this one I’m watching now to see. This one didn’t help very much, but the first one with ‘fancy text’ looks like it’ll be useful

I also found some info in the ‘stacked text’ video about how to fix issues- and was able to clear maybe 60% of the issues. Apparently a lot of people doing Artwork in editors add duplicates and overlapping lines without giving much though to how it’s interpreted in CAD programs, as long as it looks good.

Thanks for the help- appreciate it

Okay, this is straight up impressive. Did the change of software from F-Engrave to Carveco really make the difference or was it something else? I made quite a few inlays with F-Engrave now (and with the Estlcam-Trick) but they don’t turn out nearly as awesome as your bull.

Carveco is free for 3 months. When I first downloaded it, it was taking me minutes to do things that Estlcam and Inkscape had me stumped on for hours.

Since it’s free- try it out. I’m sure you’ll like it. Even though it says it’s gif sainsnart customers, it worked just fine for me. Postprocessor is available here

OK, not a big Fusion360 person. I have used Vectric Aspire, Estlcam, and Easel. In digging around on the forums, and in a lot of places, and here, ArtCAM used to be popular with a lot of people, but was discontinued. Some people had asked about Carveco Maker and its related products, but alas no Marlin Post Processor. At $15/mo. cheaper than Easel Pro. After doing some digging about in various sites, forums, and my rear areas, I believe I have found the solution. Took some effort, editing, and… 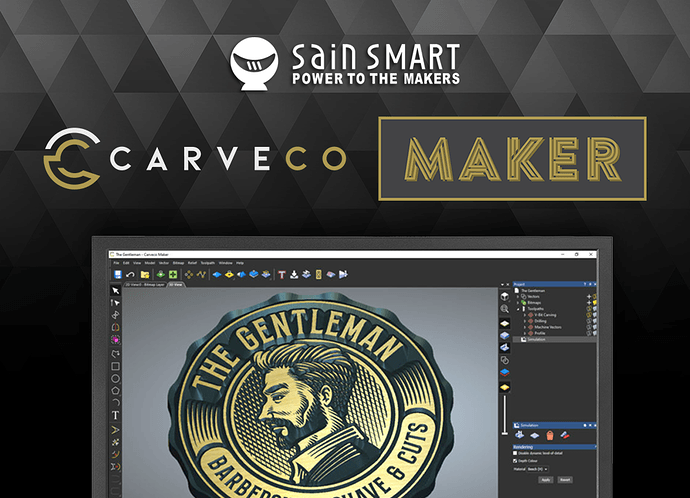 Carveco Maker For SainSmart Customers As part of our ongoing partnership with SainSmart, all SainSmart customers are eligible to use Carveco Maker free of charge for 90 days.  Following this 90-day period, your subscription automatically...

Philipp, I don’t want to knock F-Engrave because I’m sure the creator put a lot of work into the software. I do not know why it wouldn’t work for my particular setup. So I will say this for me with my setup on the MPCNC SKR board and Marlin firmware…using Carveco is a dream come true. It makes the use of my CNC enjoyable. I can sit down sketch out what I need. Export the code directly to my SD card and go cut it. I have zero complaints about Carveco. Working a full time job with a family, I have to make the best use of my time and if 15 bucks a month saves me hours it’s worthwhile. Might not apply to everyone. There are many other options but this is what I will use until it no longer serves my purpose.

Agreed. With such limited time, I don’t really have time for sitting at a computer trying to get things to work

At some point soon, do you mind if I PM you for specifics? Got a few cutting boards planned and want to get it as close to correct as I can. I’m making 3” thick end grain burger blocks over the next couple weeks

I am not a really big fan of subscriptions and I am designing everything in AutoCAD and Estlcam (though if creating toolpaths is easier there I might contemplated to use it for that). I would really only use it for inlays I think. I also contemplated V-carve Pro because it also has nesting, which you can’t really get for free either.

That’s fair. Not everyone wants a subscription.

I’m hoping to fold inlays into my business model- so 1 sale of a nice Chonky in-lay butcher block would cover me for a year. Make the business pay for the tools

I also contemplated V-carve Pro because it also has nesting,

Deepnest.io is pretty insane. I doubt anything could nest better. Once you figure out the interface, it is pretty easy. Add your material size, drop in all your paths, let it work as long as you want. Options for how to leave any free space as well.

Sure np…. I’m no expert by any means but don’t mind comparing notes and sharing info. Most of the cut depths etc I learned from you tube videos. Then experimenting on scraps. I can send you a few links to those as well. The board I posted is edge grain or face grain actually and from my understanding edge grain is less forgiving that End grain due to the wood fiber orientation. I have some end grain boards made up and ready for inlays soon. I’m build a bandsaw right now…lol from Matthias Wandels plans.

Carveco Maker Plus is the competitor to Vcarve Pro which both have Nesting as I understand. Little more pricey for those.

I don’t think F-Engrave has nesting does it? I compared Vcarve to Carveco initially. Carveco Maker plus is comparable and some same essentially the same as Vcarve Pro. What sold me is that with Vcarve I had to pay a one time fee. Then if I stopped using it or changed later I would lose that expense. With Carveco I can cancel and pick back up at any time. Keeping the files I’ve already created. But I do get the subscription issue…it’s killing all of us.

Deepnest does not work any more. Has not been updated for a few years and takes hours for only one solution nowadays.

The board I made was endgrain and it felt way more easy actually. Subjective!!

Deepnest does not work any more. Has not been updated for a few years and takes hours for only one solution nowadays.

It ran for an hour and nothing happened for me. -_-

If you want inspiration, this guy is awesome: Inlaid Cutting Board made in USA by Brother in Wood, broinwood, cnc inlay, – Custom Cutting Boards by Broinwood

I don’t like all of his designs, but what you can clearly see is that he does NOT use any 90° angles, every corner is filleted a little.

Oh, I’ve been following Broinwood for a long time… definitely inspired my desire to do these