I spent four hours sanding flat parts yesterday. A drum sander would be awesome, but so would $1500 in the bank. I’ve seen a lot of diy disc/belt/drum sanders on YouTube, but I’m not sure I could pull it off without some very detailed plans. I’m also concerned about the thicknessing aspect of a hard drum on screws. Say i start out with 3/4 common stock. A lot of times i need it to stay about 3/4 (like the parts I made yesterday…they slot together with finger joints).

Other times, it would be nice to thickness them down similar to a planer but less aggressively.

I’m getting better at building stuff, so what kind of machines have y’all seen and liked/built? I’ve got a craftsman jobsite table saw for parts, and a complete central machinery (hf) planer for parts (except the rubber rollers are probably shot).

I have a performax cantilever type 16-32 I think it is. I’ve had it for twenty-something years and there’s no way it’s paid for its keep, but the pain of purchase has long gone and it’s nice to have for when it’s needed.

If you can afford one, they are a great adjunct to your workshop - I’ve used mine for surfacing veneered bits, truing up instrument bodies and sound boards and lots of things that are super fiddly by hand. It is NOT a thickness sander really, nor is it a finish sander, but most recently I ran some old boards through it after they’d been sized in the thicknesser and glued to make shelving - just to take out that microscopic ridge in the glue up.

If you need to take off millimetres, they are the wrong tool (unless you have one of those big drum versions) - before I had it I was quite good at sharpening and using hand planes!

With drum sanders, for that matter any power tool, experiences can vary quite a lot. Knowing what it can do, and not pushing it by overfeed/overspeed is the key.

Like Peter, I have a 20+ year old Performax 16-32. I use it quite a lot to sand parts and assemblies. Hours of sanding have been saved by it. Bought it used off Craigslist for $500, some 10 years ago and I have no regrets.

If you need to take off millimetres, they are the wrong tool

That makes me feel a bit better. By the time I get to sanding, i definitely don’t want to take off millimetres.

Did you build that one? I saw that one, the one he derived the plans from, stumpy nubs v1 and v2, and about 6 more, plus a dozen or so on YouTube with no plans.

Did you build that one?

No, but I did consider it when I was in your place. I still don’t have a machine that can do it.

I built the table saw fence. It was pretty easy and the plans were worth the small amount I paid for them.

Paint and Poly on my Table Saw Fence Things You've Made

I don’t know how much background I shared about this, but John Heisz has some table saw fence plans. I made the fence, it’s great. Someone on his forums made the play on the name and called it the Heiszmeyer, so I went ahead and cut that in the top of it. This is about how I colored and finished it. [attachment file=36509] I started by masking off most of it. If I did it again, I would mask off even more, because it’s really a time saver. [attachment file=36510] I sprayed the “2x rustoleum”…

I actually bought his gear template generator, that’s pretty cool as well. The things he does are always really good.

I still just use hand tools when it comes to sanding large surfaces. I have a belt sander that I swap out to a fine grit if I need to flatten sand a large piece. Then I switch over to a RO sander to clean up any marks the belt sander left.

A lot of times I’ll skip the belt sander as the RO with 60 grit can clean up a board very very fast.

Someone should make a robot that scans the surface and measures the smoothness over the entire surface, then sands the areas that need it and repeats. It stops when it is smooth enough for the given grit, or when it is not making enough progress, presumably from paper being worn out.

Set it running and when it raises an alert, change to finer grit or change to the same grit, depending which of the two outcomes occurred.

I don’t personally know how to measure smoothness but there must be methods or devices for it.

What about just mounting a RO onto the z axis. Set the depth to .1 mm and let the sander run the full size of the panel. After the first run, do it again. Would have to test to figure out a decent feed/speed to move the sander around so that it takes off the .1mm.

Here is another idea: Make a simple drum sander - YouTube

I do like what @niget2002 suggests though. I am going to try this some time.

I’m not sure if a sander without a belt table would be as useful as it is in theory - you would have to put in a bit of effort to acquire the “knack” of using it I reckon. A few milliseconds of the part not moving and you’'ll have lovely little ripples across the surface.

Having said the above and noting my machine is a big lump of cast iron - surely it can’t be that hard!

Right. Stumpy nubs put a hand crank on his, but it looks kinda rickety. I saw another one that added the sanding drum on top of an old treadmill, bonus for speed control but kinda large. A third guy developed some pretty cool gearing for single motor use and a fourth just added a separate motor with controller.

Here is another idea: Make a simple drum sander - YouTube

That one is one of the cleaner examples. That channel is kinda fun to watch just for that. The track/panel saw was pretty cool, too.

It looks great, but I’m going to be the cranky old curmudgeon here (that’s a bit of tautology for you) and say did you check out that pine tar build up after only two runs-through? That’s seriously one of the biggest issues I’ve had with some timbers - I think it’s a combination of heat generation and doing things it wasn’t designed to do (finish unseasoned pine!

Things to consider when building your own (because you know you will) - in use there’s a surprisingly fine balance between feed-speed, depth of cut, surface heat, and the time you have to spend standing there while you tell yourself you could have done it yourself in half the time (you couldn’t). Then, just as you think you’ve got everything right, the thermal cutout on the motor cuts out, and you end up with a wave-form on the surface of the last leg of the TV unit you were building!

Enough! I know I’ve given the machine a hard time, but if you look carefully at this pic, you’ll see the slatted doors for a cabinet I’ve been building. The joinery was pretty good to begin with, but the sander made quick work of making the surface perfect across the sixteen mortices on every door.

It’s the least-used machine in my shed, but I’m not going to part with it!
You know you need one. 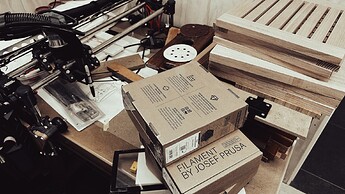 They really do look great. But Prusament to Australia…

Yep! The Prusament was free (Prusameters really work) but the shipping was (cough) close to the price of other reasonable filaments delivered!

For direct comparison, I could have had Polymaker Polylight for the same price as my “free” Prusament, or four spools of eSUN for the price of shipping three!

I have to say that the Prusament does give awesome results. Whether that’s because the Prusa eco system is so dialled in or because the filament is brilliant I don’t know, but while I can get it at reasonable cost I’m happy.

That’s what I’m here for, and why I bounce my ideas off the forum before I get started. My sanding cabinet is still doing its job pretty well, too. I went down to one fan so I can make a paint booth for wifey with the other, but it’s still grabbing a lot of the mediums (and i have to guess the fines as well).

Or maybe one of those long board sanders that uses the rolls of sanding paper.
Like they use in auto body maybe could use air powered one for weight reasons and have a modified muffler output to cool the wood and blow the swarf away.

How about a weighted kind of roomba ? With some kind of wheel lowering system.