So the journey begins, Primo kit and extras already arrived from Ryan! 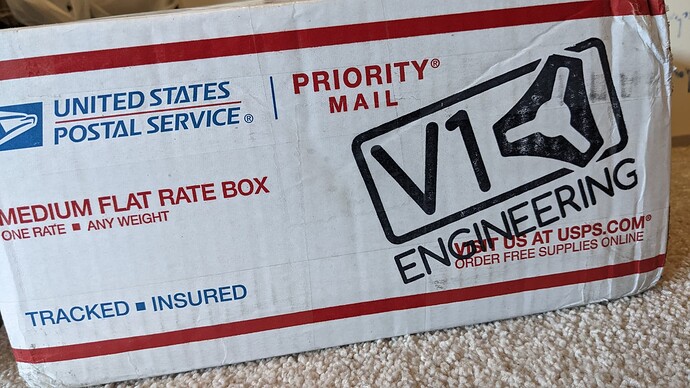 I’ve acquired the tubing, after guidance from the forum not to buy pipe, due to one focused on internal diameter vs outer diameter. Originally looked at conduit but was put off by the galvanized finish, many recommended DOM but I settled on the more expensive stainless steel as I didn’t want to deal with ‘potential’ rust. As Ryan’s design looks so good I want my build to have the a polished look. I purchased the pipe from Metal Supermarkets and also had them make all the cuts I need for a 12" x 24" work area. 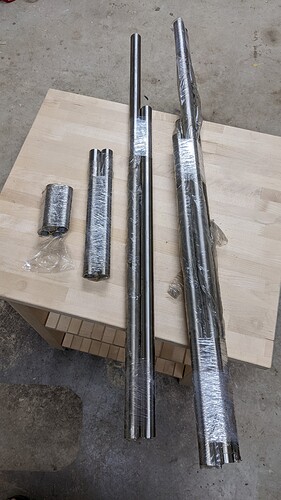 As a fan of Klipper I went with the Manta M8P, which has the added benefit to drive a couple extra steppers if I can come up with something creative. The benefit of the Manta is that it hosts an on board Raspberry Pi (Compute Module version), in order to communicate with the control board. Granted this is a little overkill for the CNC, but I really like my 3D printing workflow with Klipper and wanted to mimic here. Due to the supply chain issues of an actual Raspberry Pi, this solution made perfect sense as BigTreeTech produce their own Compute module, the CB1, more readily available and a small step in performance above the Pi 3. 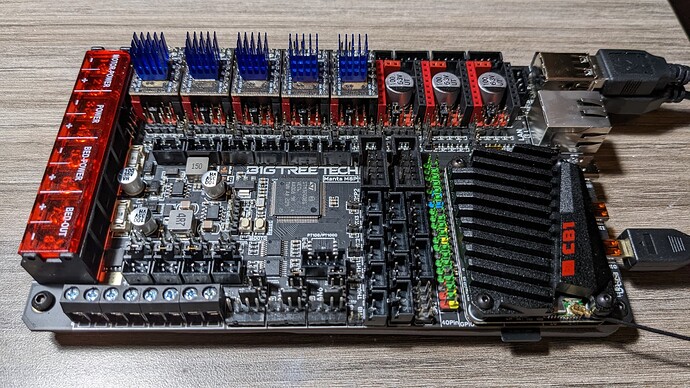 I’m hoping to leverage an old monitor to display the Mainsail interface, with a remote keypad for control. I’ve already tried running a lightweight browser on the CB1 to view Mainsail, but it’s a little too clunky from a performance perspective. So I’ll consider switching to a Raspberry Pi CM4 in the future or repurpose an old laptop.

I’ve purchase 4 rolls of silver Spata3D PLA+, and while I haven’t yet tuned the printer for speed I have for PLA and started churning out printed parts. As I have a habit of over engineering, I am printing at 51% Gyroid infill as it’s supposedly the strongest for stressed parts from all directions. However, it is adding hours onto each part, so expecting a couple of weeks worth of printing ahead. 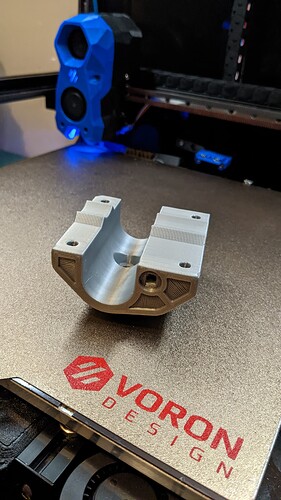 I went with silver filament for all parts, to match the look of the stainless pipe, which will be a contrast to the teal colour of the Makita router. 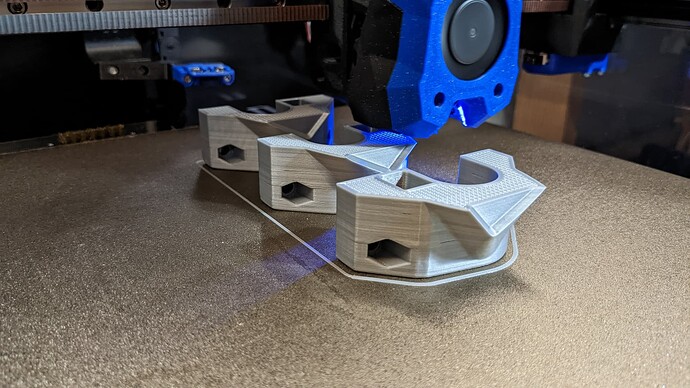 I plan to mostly cut wood with some experimentation on metals, so I plan to build an enclosure with air to clear the chips, and vacuum around the outside edge to keep clear… will see how that works. 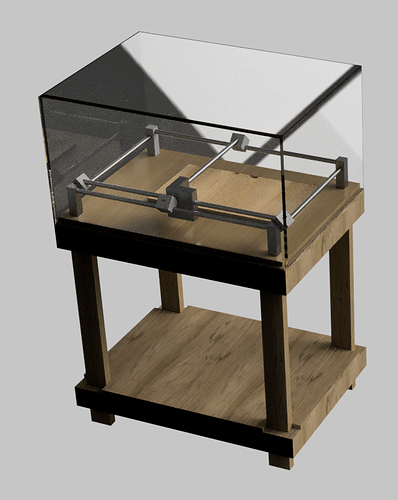 I’m sure it won’t look identical to this but this is the kind of thing I’m going for.

looks awesome. Keep us posted on how the Klipper goes. I have a spare Octopus laying around that I would love to use for this but the lack of Klipper with CNCs is a bit dauntingfor me but having Vorons as well would love to use if works well as I’m so familiar with Klipper and Mainsail!

I plan to continue posting updates to this thread, although with a busy 6 weeks+ ahead I don’t expect to get this cutting until January at the earliest.

The main driver for klipper was not wanting to go back to Marlin, I know it’s not quite the same, but after upgrading the Ender 3 to klipper a year ago the difference was night and day for configurability and usability.

Looks really good so far. Looking forward to hearing more about your experiences with Klipper!

Here’s a tip. Don’t do the tug and replace of the connectors on the Manta board with Molex bases. The pins on the Manta are shorter and slightly thinner, making the perfect random error generator.

Thanks for that tip, I’ll change the plugs in the wiring loom instead.
Just the core and 2 trucks left to print…

I also appreciate the tip!

I’ve just reassembled my machine (23.5 - pre burly) and am going with Klipper as well.

I too am following this closely. Looking to use Mainsail on my LR3 build. Has anyone started a fork of Mainsail for CNC? Looks like a lot of the bones are there, just need to customize to show for example router rpm instead of bed or he temp.

Not started a fork of Mainsail for CNC, I’m still printing and getting ready for the physical build.
Great to see lots of interest in this software option!

I too am watching and waiting. I started trying to use Klipper and Mainsail (another Voron builder here). Ran into problem of pausing and resuming without diving into the work piece. So I’m very interested in your journey. I’d love to use mainsail and klipper with the machine.

Question for the group, what would be the closest to a convenient interface, mainsail or fluid?

I don’t have any experience yet as I don’t have out up and running. However, I plan to start with mainsail.

Ya personal preference for mainsail but honestly both pretty much the same and very capable. 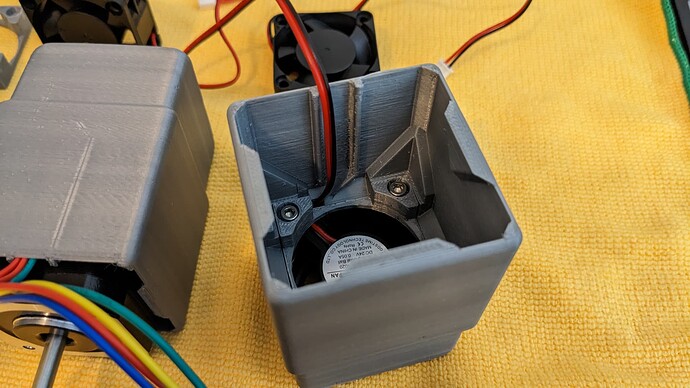 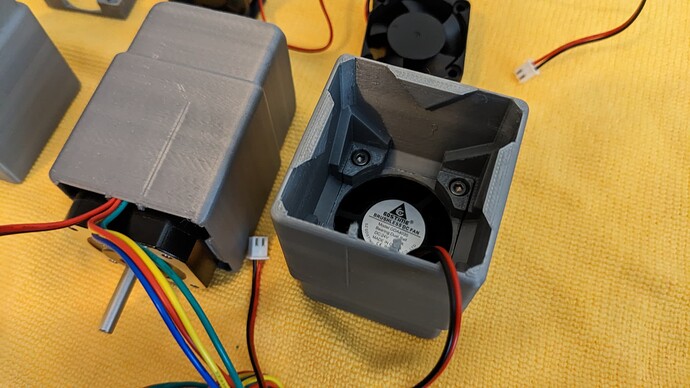 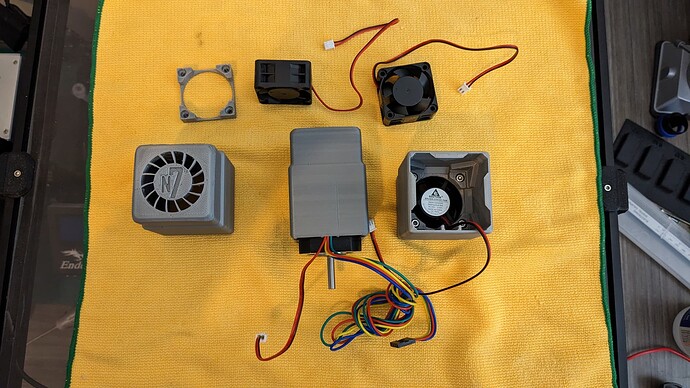 While still printing the main MPCNC parts, I designed a fan holder to slide on top of each stepper motor. It may be overkill if I don’t end up running them hot enough to skip a beat, or useless if they clog up with chips.

It may be overkill if I don’t end up running them hot enough to skip a beat, or useless if they clog up with chips.

Steppers dont skip because of heat. The stepper drivers overheating might cause skipped steps, but not the motors.

That said, cooling the motors isn’t a bad idea, because what hot motors can do is deform the printed plastic parts. About 50°C is the hottest that you want the motors to get, after that point the printed PLA starts to soften.

My motors are pretty dusty, they seem to collect it, so I don’t know this would work for me, but my motors hardly ever crack 35°C. The fan that blows ofer the stepper drivers has remained clear though.

Maybe I merged my research around heat issues seen when people are pushing the speeds and feeds.
Designing this fan holder gave me another opportunity to learn more about designing Fusion and making parts, so not a complete loss.

I did plan to actively cool the driver board, although I think I’ll find a simpler solution for that.

I used (and then modified a little bit) this BTT Octopus case BTT Octopus V1.0 & V1.1 Electronics Box by twhite0101 - Thingiverse, I didn’t look to see if the Manta has a similar or same mounting size. 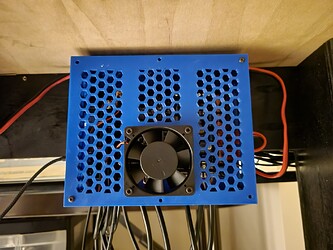