Although I had a LR2 kit for months, I could never find the space and time to set it up.

I’m finally able to move forward, but of course I’m looking at it and I have questions now, specifically around the controller.

Please note that I’m a newbie in the world of CNC, so my questions my seem a little bit basic. I’m not a newbie in electronics and 3D printing though.

So on the controller: I have the Rambo 1.4 with the LCD screen. There seems to be a possibility to completely natively control the CNC using just the LCD screen, ie using uploading through a SD card native G-code and start it from there. Is this correct ?

On the topic of the controller, unless I’m mistaken, I’ve not seen a 3D printed enclosure for controller plus screen, at least not on the main Thingiverse LR2 page, did I miss it ?

Is there any advantage/disadvantage (except workflow) to control the CNC using a PC connected to the Rambo, and if so what is the recommended freeware PC based control SW (I’ve seen multiple options, but which one would be best suited in your opinion for LR2)

In terms of design workflow, is there good reading material for using Fusion 360 with LR2 ? I’ve been using Fusion360 for quite some time, but never for generating CNC GCode. I’m not asking for tutorial on Fusion360 CNC tools, there are plenty available easily found, but rather something more specific to how it would relate to LR2 usage.

There seems to be a possibility to completely natively control the CNC using just the LCD screen, ie using uploading through a SD card native G-code and start it from there. Is this correct ?

Yes, that is correct. I have a Primo, not a Lowrider, but I run all my jobs off the SD card. I don’t like having my good laptop at risk in the shop. The only downside is that the interface for moving the axes for electronically positioning the router is clunky. There are ways to address the issue (joystick, pendent, manual movement).

If you do decide to run your jobs from an SD card, and if you use a touch plate for setting your Z height, modifying the Z homing in the V1 custom menu to take into account the touch plate thickness will make your job easier. It is a simple change to the firmware, but it does require you to learn how to compile your firmware using PlatformIO.

Is there any advantage/disadvantage (except workflow) to control the CNC using a PC connected to the Rambo, and if so what is the recommended freeware PC based control SW

There are a variety of things you can do with most g-code senders that are clunky with the screen and a SD card. For example, manually sending g-code commands, or programming option buttons to send sets of g-code commands for common tasks. Historically Repetier-Host has been the recommended g-code sender, and there are some setup instructions here. Note there is a bug in the latest version where arcs (G2, G3 g-code commands), are not displayed correctly in the Windows interface, though they do mill correctly on the CNC. You can 1) ignore the display, 2) turn off arc commands in your CAM, or 3) run an earlier version of Repetier-Host.

For running Fusion 360 with a Primo or a Lowrider, you need a postprocessor. You will find the recommended one here. In terms of learning the CAM, I list some of my learning sources in this post, though these materials are a bit dated.

That leaves the question of LR2 cases. I’ve seen more than one used including this one.

Anyone who is, or has been, a LR2 owner: do have a specific case recommendation?

Many thanks for the response, that clarifies things a lot.

Although of course, it does raise additionnal questions

I’m familiar with modifying and compiling Marlin (I did it for my CR10S when I replaced the control board), although admittely this is not something I do routinely (so I have to re learn every time I do it

Now on to the additionnal questions:

Since Repetier Host originally was (and still is) a 3D printing tool, is there any alternative to Mach 4 (or a few others) for controlling LR2 (as Mach 4, as I understand it, only supports GBRL)

Thanks for your help

Marlin no longer compiles (on Windows) using the Arduino IDE. PlatformIO is now the solution of choice, and Ryan’s instructions at the provided link work for most people.

I may have jumped the gun just a bit with this suggestion. On the Primo, touch plates are implemented using the Home Z functionality, but on the Lowrider, the machine homes Z up, so on the Lowrider, a touch plate must use a probe functionality (G38.2). I just downloaded the firmware for the Lowrider, and was surprised that V1 did not provide a probe function on the custom menu. It is easy to add additional menu items to the custom menu, so you can still fix this issue.

In the configuration_adv.h search for ‘CUSTOM_MENU_MAIN’. You will see the defines that implement V1s custom menu and menu items. You can reorder or change any of these items. In addition, you are not limited to just the 5 items roughed out in the code, you can add many more.

I think it is best that someone who uses a Lowrider with G38.2 gives you the probing g-code to add as a menu item. I could write up something that I think would work, but I cannot test the g-code…not even on my Primo since I’m away from my machine at the moment.

Regardless of how you trigger it, some people have enabled multiple probing for the G38. Search for ‘MULTIPLE_PROBING’ in configuration.h.

While it is not always convenient, you can always put sets of g-code commands in a file on the SD card and run it from the SD card.

There are touchscreen LCDs out there…ESP16/ESP32 wifi

If you want to explore all the Wifi solutions you might want to open a new topic. I don’t use them (explicitly), so all I can do is reflect back some things from the forum. The most talked about wireless solution for the Rambo is a Raspberry PI and using V1Pi. As for a touch screen, V1 ships one with the SKR Pro. In theory that screen could be used with a Rambo board. You would need to enable a second serial port (easy), and you would need to make sure the display is 5V compliant (I’m pretty sure it is). I call out this specific display (TFT35 E3 V3) since Jeff and/or Ryan has done a substantial amount of work on the firmware to customize it for MPCNC use. And, I got the impression that it was not easy work. That firmware is available on this page. I mention this work since if you selected an alternate TFT (perhaps one with wifi), then it is work you may have to do.

There is a version of GRBL that will flash on the Rambo board, so that is a route you can take. It doesn’t natively support a display. The reason for Marlin being selected over GRBL has been talked about on the forum several times, but I’ve not internalized the answer. I think it had to do with what boards were available at the time Ryan started his business. And Marlin’s support of CNC features has improved over the years.

starting which version does Repetier host has issue with Arc

I must say I’m not aware of this touch plate function, I’ll have to dig around

The touch-plate sets the cutting bit’s Z zero point by using the plate as one side of a switch, and the cutting bit as the other. You connect the plate to an end stop pin, ground the bit, then place the plate on top of your mounted work piece and run a probe action (similar to homing Z but in the other direction on a low rider) that lowers the bit until it touches the plate. Depending on the probe cycle you choose, it may go up and come down again more slowly (in order to be even more precise). If you set Z=0, all your cuts will be too shallow by the thickness of your plate, so instead of setting Z=0, you set Z=0.5mm (or however thick your plate is).

If you always use the same touch plate, you can build that dimension into your probe code, or include it as a Z offset in your firmware.

The reason for Marlin being selected over GRBL has been talked about on the forum several times, but I’ve not internalized the answer

It’s always been an issue that the tools we use say “print” instead of “cut”. But if you squint, and ignore those features, Marlin works very well. There are a few features in grbl or linuxcnc or mach that aren’t in Marlin.

Mach 4 doesn’t work with grbl, AFAIK. Mach 4 uses a windows machine for the control. Which I think is a bizarre idea. The windows version they use has to be customized to be near deterministic enough. But it is defintely an expensive and complicated way to do it (that’s me, with my software architect hat on, not from any experience using it).

A more CNC-focused UI that you can use on a computer with Marlin or grbl is cncjs. You can run it in desktop mode, or attach a pi and run it through a web interface.

I must say I’m not aware of this touch plate function, I’ll have to dig around

Just posted this on the touch plate:

I’ve wanted to get Ryan’s Tiny Touch Plate since soon after assembling my Lowrider 2 a couple of years back. Unfortunately it’s such a good deal that the plate costs a fraction of the cost of shipping so I could never click the buy button. But I’ve finally made one after Ryan suggested they were easy to put together. He was right! Here’s the vid: [Making a CNC Z Probe]

I’ve not seen a 3D printed enclosure for controller plus screen, at least not on the main Thingiverse LR2 page, did I miss it

I’m using this one but I like the look of the one @robertbu suggested better and I never actually use the screen or sdcard: 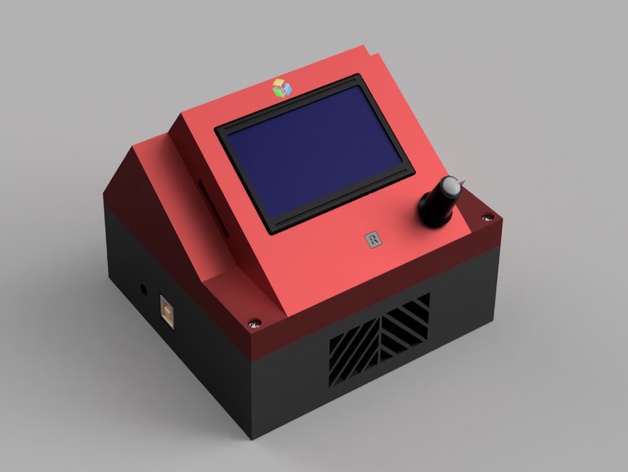 A nice looking controller box for the RAMBo 1.4 and the RepRapDiscount Full Graphics Smart Controller. This setup is for an MPCNC but can easily be used for other machines as well. I recommend that you set the fan to blow from inside out and mount a...

I have CNCjs via v1Pi (v1pi) running on a raspberry pi connected to the rambo 1.4
I connect to the pi via wifi from an old laptop using the CNCjs web interface. I also use the cncjs tinyweb pendant on my phone to control the machine for short jogs. If you have a laptop around making changes to firmware via platformio is really simple. Plugging the laptop into the board via usb allows platformio to detect the board and install the firmware easily. Understanding Platformio is a different matter.

Re: workflow etc,
There has been a lot of progress on the Docs
Some people are using Fusion360 gcode, others export dxfs and do the CAM work in Estlcam.

Many thanks for all suggestions, this clarifies things quite a bit

Time to get my hands dirty and start experimenting. But first things first, SD card “cut” at first just to get a feeling on how the whole thing operate, then I’ll look at improving the build and workflow