Here’s the work in progress of my large mostly metal 3D printer.

It’s Core XY and should end up about a 600mm cube. The steel frame is welded, all the flat aluminium parts were cut on my Primo. 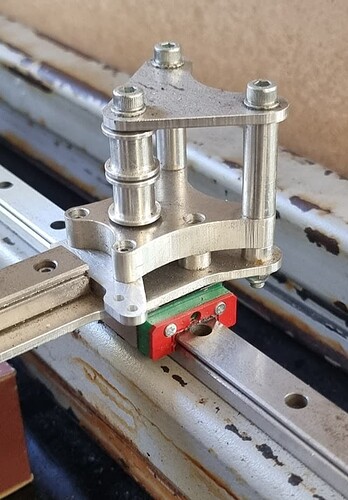 I’m using Nema 23 motors at the moment, the plan is to maybe switch to O drive at some point, I was getting some laser cutting done for another project so added in some of the steel printer parts 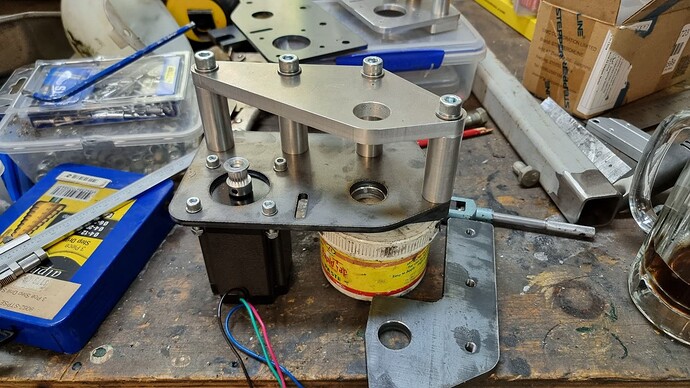 Just being able to weld the base of the motor mount to the frame made life a lot easier than doing these bits in aluminium.

I’m planning a Slice magnum+ extruder but want to test the rest of it before I drop the $ on that.
One thing I’m not happy with is the little idlers have no crush tube in 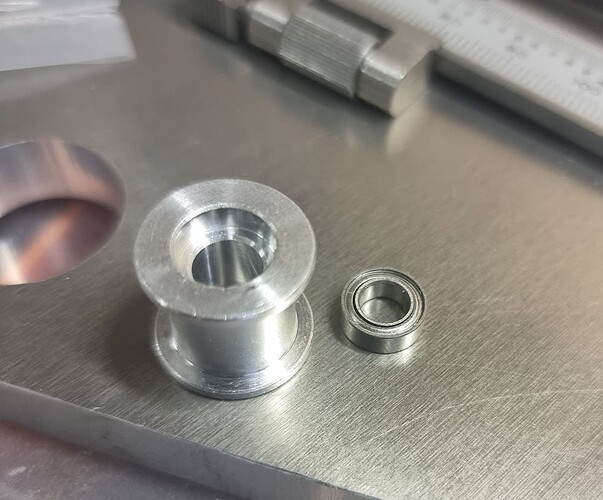 I tried taking one apart to do my own, but that turned into a mess, this is 20T idler for a 10mm belt with 5mm bearings, if you happen to know a source with a crush tube in I’d love to know.
The next step is to get this bit moving on its own just to prove it works but pushing it around by hand so far it looks ok.

For the idlers I have not seen a more proper one yet. I just leave them loose. Those bearings are low quality, so make sure to get some sort of lube in there. I have a thin PTFE lube I drip into the middle and roll them around for a day or two before assembly. Hoping it soaks in to the bearings. The 5mm bore ones are miles better than the 3mm bore ones though!

For some reason I’d not thought about lubing the bearings, I’ve a little vacuum pump I’ll fire that up and see I can force some oil into them that way.

The nozzle will be 1mm maybe bigger, hopefully the stiffness in the thing will enable me to get some proper speed out of it, so the magnum+ is as far as I now the best big volume hot end out there without going to stupid money or a pellet extruder. Mostly this’ll be printing nylon-CF.

A few more parts turned up…

I’ve now got the right length belts for the motors, the idea with the offset motors is so I play with the gearing if that might have advantage to it and potentially going to O drive in future which I believe would need reduced gearing.

The belt tensioner from 10mm steel is probably overkill

but they cost $2 each when added into a larger order.

I’ve wanted to run this thing on Klipper, the impossibility of buying Raspberry Pi’s is a PITA, I bought one of these instead which apparently can do the job.