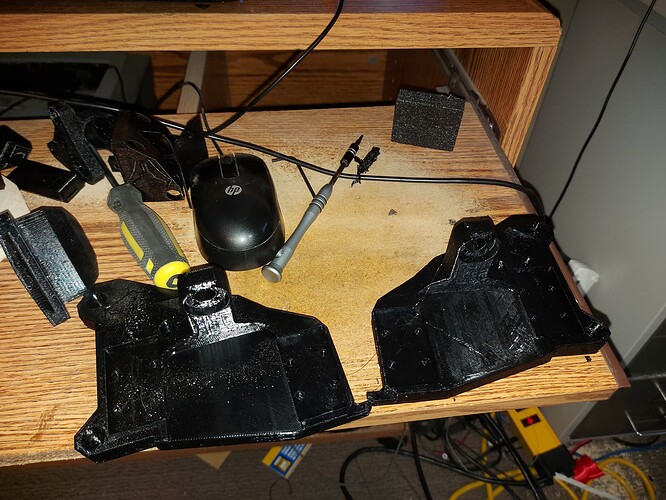 Took so long to get to 13mm, then took off the rest of the way. That infill is dense…

Test fit them on the Z rails, and of course they’re a perfect fit. Buttery smooth action. 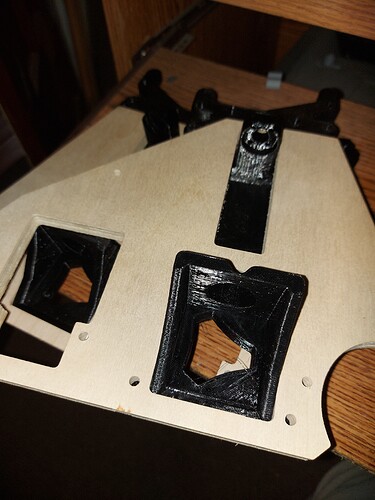 My M5 hardware is out for delivery so I can put on the Z limit switches.

So… I just spent an hour and a half at Home Despot selecting the 2 straightest pieces of 1/2" conduit that I could find. “Straightest” being a relative term here… Neither of them are actually straight, but they ought to do.

I then cut them into 6’ and 4’ pieces. The 4’ pieces should be long enough to make the X span, whichever of the 6’ pieces is better will end up as the Y rail.

I re-printed some printer pieces last night, so I’m going to spend a bit of time refining the printer a little today or tomorrow.

I just screwed my Y rail down. I am pretty confident bends will not be a huge issue. I am sure there is a best option like having the bend up or down is better than side to side.

I am reworking the X tensioner real quick then the Y Belt mounts. 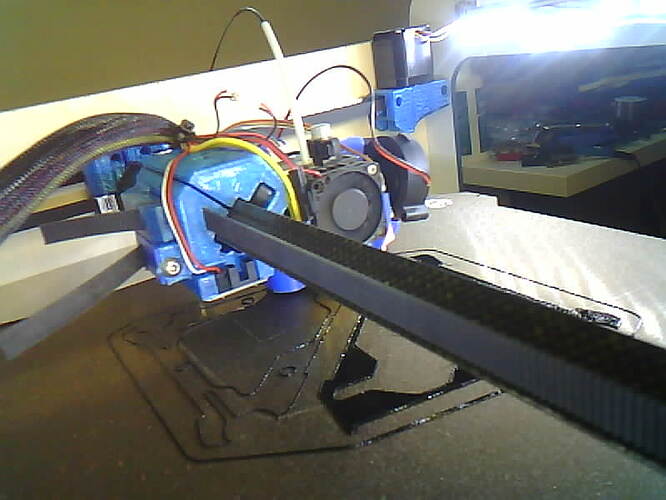 The number of braces is (somewhat) variable based on the X span. Looks like I need an odd number (7) but I get 2 per print plate. I suppose that I could still print 8 and just space them closer together, since I need to alter the brace plate that I’m going to cut anyhow.

Well, my intention was just to mark the 2 50% infill braces as ends, but there’s a better way to make sure they’re on the ends… just bolt them on. 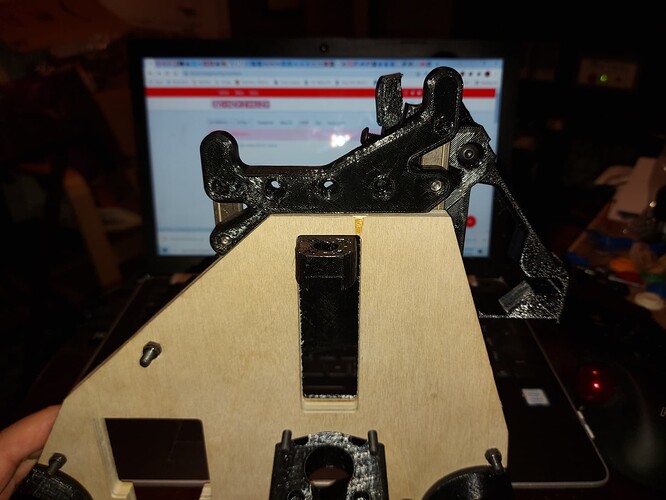 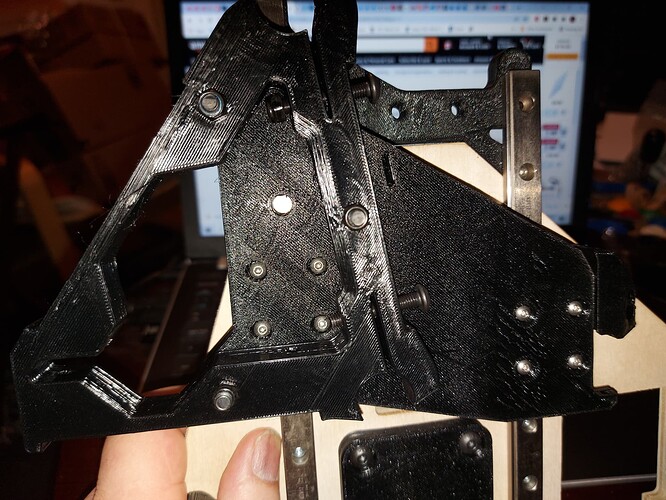 Side benefit, now I can start work on my electronics enclosure. Still haven’t finalized my X span, so I don’t know for sure how far apart the braces will be, but with a max span of 8" the electronics enclosure will almost certainly go between 2 of them. My choice is to make dedicated holes in the flat piece, or use the brace bolt holes.

I’d just use Ryan’s enclosure, but I’ve already swapped out the SKR board, and it wouldn’t be fair to ask him to make an enclosure that fits my board.

I still need to print some more braces, then the Y belt holders have been released, so I can do that.

Gonna give the printer the night off though. The BLTouch is acting up, not sure why.

I’d just use Ryan’s enclosure, but I’ve already swapped out the SKR board, and it wouldn’t be fair to ask him to make an enclosure that fits my board.

I have a “blank” started if you want to adjust my CAD to fit your board. I plan on making a box for the SKR Pro and Mini in the next day or two. I just need to decide about the LCD location before I do.

So if we end up at 2 sets of bearings. That XZ and YZ plates will get redone. All the rest would stay the same. I would literally just add another bearing above the ones that are there on the XZ plate and extend the YZ plate to fit the rails.

The pivot is that set of 4 screws right in the middle of that brace, the one in front is less of a pivot.

I have a “blank” started if you want to adjust my CAD to fit your board.

That actually sounds like the best idea. Most times I do my design work with parts in hand, and a caliper, where I can visualize the parts relation to each other. I’m sure that I could do my own design once I have more of the parts in hand.

I’m sure that I’m overcomplicating things though. I could probably get away with stringing flat pieces between the braces, and then just use standoffs to mount the board…

Here is round one, Quick and extra dirty. No screen spot yet.

Share 2D and 3D design files and project files with anyone. 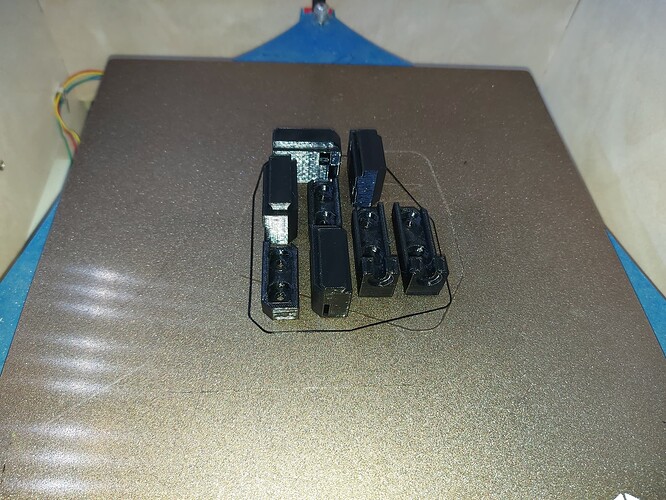 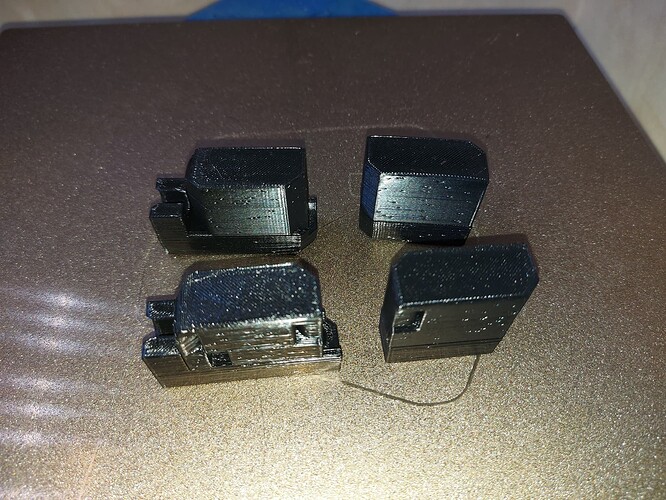 In other news, I took that Fusion file and made some modifications to move the board mounting holes to 115mm by 92mm. This makes it a little shorter than the RAMBo, and a bit wider. I think I might need to stretch the overall box in order to accommodate the wifi antenna, and I don’t know what I’ll do about the SD card or the USB, but with the wifi, it’s not like I need access to those things often anyway. I don’t think I’ve plugged in a USB cable or removed the SD card from the Primo since I moved it over to the Duet, and I expect that the LR will be the same.

Ya win some, ya lose some. 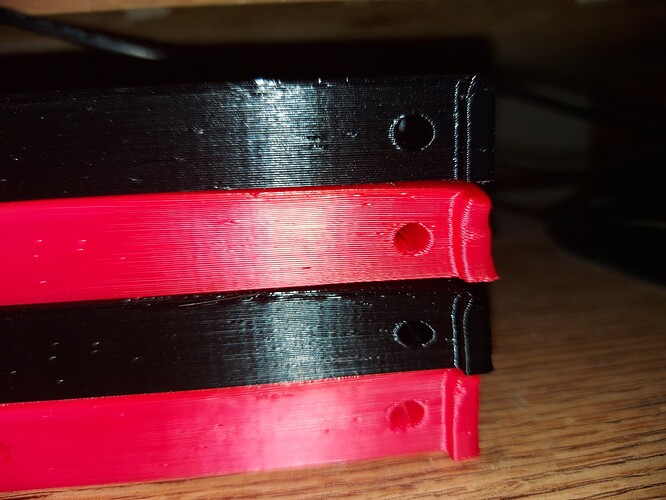 It takes a bit over 3 hours to print a pair of these, and it seems that my bed adhesion is somewhat lacking.

I used to print almost everything in ABS, and with that, it wasn’t a question of if something warped… It was how much did it warp?

With a new printer, I was finally able to get PETg to print, and to my delight, I stopped getting warped prints. It became very rare that things warped unless I did something dumb. (Running the printer directly in front of the air conditioner, for example

At some point, I stopped checking each and every print that came off of the printer, and now, I apparently don’t check often enough.

This is going back to PLA, and while PLA is much easier than ABS, it’s not as good as I’ve been getting from PETg either.

I’m likely printing bit hot for PLA, which does increase the chances of warping. The printer is in the basement, which is definitely cool, if not cold, but I’ve been still getting good results with PETg.

Anyway, I re-did the slice for the braces. I can’t decide if maybe printing more at a plate will increase or decrease the chances for warping. I can fit 4 on the print bed, but I think that maybe one at a time might be better, even if it means more overall print time.

Plate is probably cooler on the edges.

That was my thought too, but this is a large plate, and those corners aren’t anywhere near the edges. I have room for 4 of those braces on the plate, but was only printing 2.

Well, I’m printing one at a time. Looks like that printer’s got some other problems, too

I’m going to have to pull the heat block out, I think I need to replace the extruder throat, it’s still jamming. I’m printing some of these on the old printer.

Is your bed clean?

You could add a brim

You could reduce the speed of your first layer perimeters.

It doesn’t look like big warp issues. It looks like just that first layer on that corner isn’t sticking.

Starting to think the Repeat might be the issue. Lots of issues with the builds.

Looks like it to me, too. I’m not super impressed by the PEI/spring steel sheet that I’m using. The smooth side gets terrible adhesion and the rough side needs at least 20°C higher temperatures than my old printer to get good results. (On the smooth side, I don’t get warping because the prints never get that far, the hot end just picks up the whole piece and starts pushing it around the bed.) Temps verified as close to nominal with my IR thermometer. Also, verified that the temperature is reasonably even over the printable surface. I wipe down the bed with 90% isopropyl between prints (most times) so it’s clean. It’s interesting to me that the lifts are in very nearly the exact same places between plates. This would indicate something systemic, I just don’t know what.

A brim might be an idea… First layer speeds are already (to me) painfully slow.

Another corner kind of lifts too, but it’s not as bad, it’s one of the pinching corners for the conduit, and it’s less than half that amount. It’s also (of course) on the other one that prints as a pair…

I’ll reiterate though, that this was NOT a problem on the ones I printed with higher infill for the ends. Those ones printed flat.

I think it’s just air flow through the printer, if I think about it. It’s cold in the basement, so airflow is a likely culprit. Maybe I need to shield the printer a bit.

Because “nothing to lose” I tried drilling out those warped pieces using a CNC cut guide (holes 68mm apart on an 80mm piece) and the result looks good. I figure that saves me 6ish hours of printer time.

I am having some trouble with the Repeat, I guess, but mostly it seems to be the Hemera. It’s jamming on me again part way into printing. It seems like it will work great for a while, then it just stops extruding. When it happens, it’s quite sudden. Maybe it’s heat creeping into the throat via the heatbreak. Maybe the heat sink isn’t cooling enough?

.6 -.8mm retraction or less? More and I did run into some heat issues.

I’ll try that, too, thanks. I think retraction is at whatever Prusa Slicer default is.

I’m not super impressed by the PEI/spring steel sheet that I’m using. The smooth side gets terrible adhesion and the rough side needs at least 20°C higher temperatures than my old printer to get good results

I was having trouble with my pei sticking when I first bought it. I found dinner tutorial about refreshing a dirty pei sheet that suggested I use steel wool (0000) and ipa (not the beer) to clean it off. Now PLA sticks great at 60C. I can adjust my first layer too big and it sticks, but leaves a negative elephant foot (if that makes sense).

PEI should stick to PLA really well at 60C. I think they have some kind of stuff on the top when it ships.