Another New LR3 Build in Australia

So I decided that I needed another CNC, I made one a quite a few years ago and after looking around I really like the LR3, so I went on a parts ordering spree before xmas. That was an interesting exercise, it seems Australia is the black hole for deliveries. But I have virtually everything except the screen that is on back order in the land down under.

So my reasons for the LR3 is that I am living on and rebuilding a 40ft yacht and there are quite a few projects that will pay for the cost of the LR3 each so it makes sense. One of the other main reasons for the choosing the LR3, is the fact I can somewhat easily dismantle it while not using it.
With a bit of out of the box thinking I decided to build a “Paulk Smart Station” wood working bench (look it up, great system) that has a 96mm x 96mm grid of holes, which is a standard MFT table design. And I plan to use the LR3 to make those 20mm holes so they are 100square and accurate, as this bench is great for wood working etc. After thinking about how i can store the LR3 when not in use at the workshop, I decided to add a 300mm wide attachment on each side of the bench as the base for the LR3 and when packed up it can sit on that “attachment” (I will probably design a bracket or cradle for it to sit on when stowed) and that unit can be lifted and put away easily.

I will post some picture of my progress on the table idea as it happens. I have built the table portion over xmas and I am going to start working on the wings soon.

As for the LR3 parts, I have printed most everything, but I am dealing with an annoying blockage on my PRUSA printer. I am drying out the filament and cleaning the nozzle again at the moment and hopefully I will have the rest of the parts printed soon. I have decided to 3D print everything for the short term and probably use the the LR3 to cut out things like the XY frames eventually.
I have started the build out of the core and parts, but was hampered around wiring due to stupid AUSPOST loosing, then fining, then loosing, then saying they delivered it (They never delivered it according to the IP camera and NVR that records the front door.) Anyways the replacement parts are coming soon.

So slowly slowly I am getting there. Next i need to order the 25.4mm tube and get that cut down to size. also start the wiring!

Here is a pic of the Paulk table 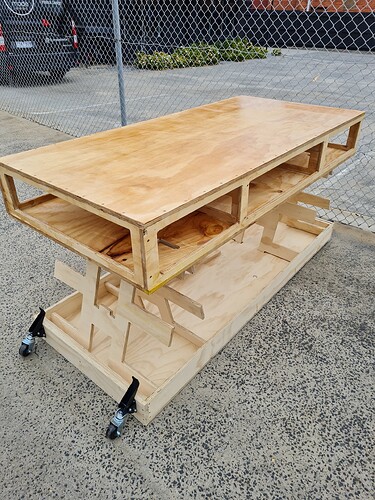 So the 300mm wide wings that the LR3 will rundown will be attached to this.
The table is only about 1800 long, and i am planning on a 1220x 1440mm cut area. Probably a huge overkill, but as that is full sheet sizes down under, whily not.

So the first thing the LR3 needs to cut is a series of holes in that table 96mm x 96mm centers and 20mm in dia. Then i can start really getting things sorted.

I have printed most stuff, 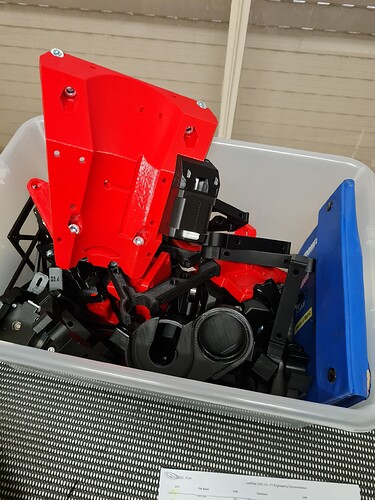 but printer has failed and worke dthrpugh that 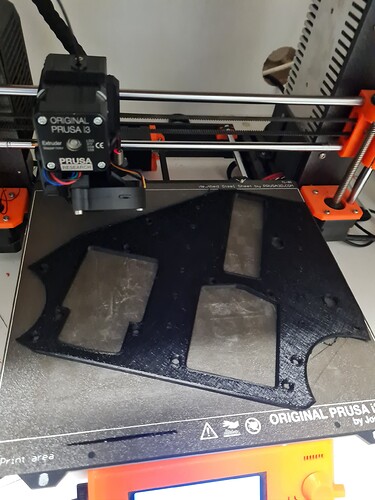 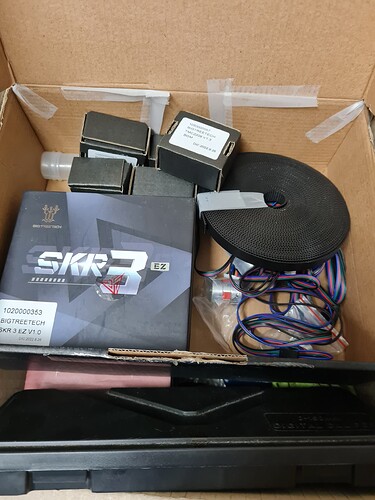 Nice one. I can’t figure out how all you blokes make so much progress in the time it takes me to not decide on the colour filament I’m going to use!

The only serious blockages I’ve had on my Prusa were due to heat creep when the ambient temps were 30+ and printing PLA in an enclosure (with fans on) if it all gets much above that it doesn’t like it, but I don’t think summer has arrived in Vic yet has it?

You’ve given me a dose of serious envy here, and a an awful lot of reminiscing! When we were renovating our current boat in (inland France) we’d find nice moorings next to picnic tables that we could use as workbench. If we were really lucky there’d be a power point in there somewhere so we could run the router. Pics of progress will be greatly appreciated (not just of the LR3)

Hi guys I’m in Aus also and looking to get a machine together, what are you looking to use in place of the steel conduit they seem to use in the US?

I like shiny things so for the LR2 I bought my tubing (polished stainless steel) all cut to length and neatly deburred from Luke at http://www.wellingtonenterprises.com.au shipping was $15.00. They will be the X rails on the LR3

My new Y Rail is from Bunnings . I don’t think it has sufficient wall thickness to make a good X rail, but it might be ok.

Recently on eBay there have been a few vendors selling exhaust pipe tubing in ss (unpolished) which I’m pretty sure would work too.

Hi!
Wow inland france! That would be so cool.

Yeah the boat rebuild is a love / HATE thing. I am DIY nutcase and if i have of known how much time it would have taken, the amount of blood it has taken and howmany times i have have to fold a 6 foot larg-ish frame into very small places with an angle grinder, AKA “the spinny wheel of death”

I NEVER WOULD HAVE DONE IT.

but is pretty good fun and i have learnt heaps and that is part of the attaction for me. 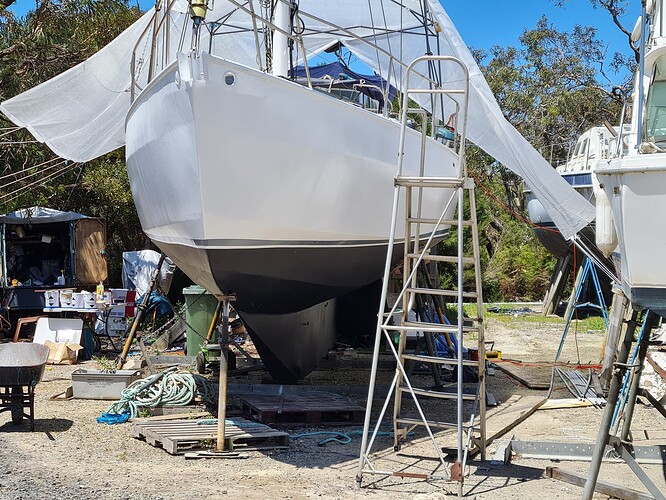 V1 has done a great job with this as he has give a great selection of tube sizes. 25.4mm is pretty common in AUS.

As another poster said you can get it from bunnings if you are lucky. I didnt use stainless.steel 25.4mm, lol, i do have to order some for the boat, but i just used 25.4 ERW 1.6mm from robot trading in melbourne.

So dont worry to much about it, its easy to get, just search in googles 25.4mm (insert type here, stainless, aluminum, steel) and your location.

So a bit more progress on the, bench, remember this bench is a multi use thing. 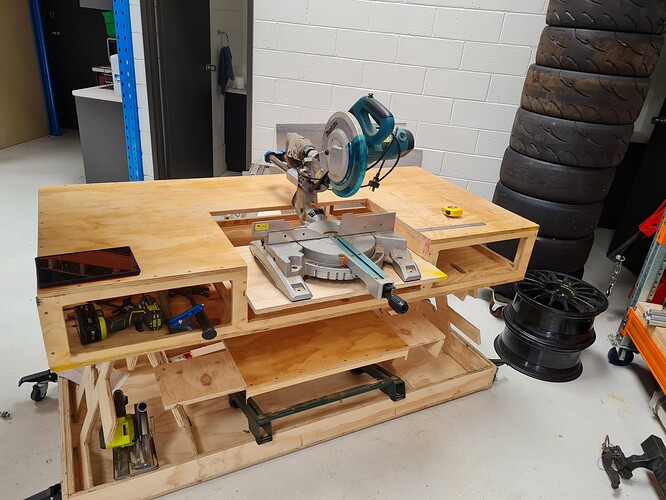 The cutup for the drop saw will be filled with a blank for different things. One for the CNC, a different one for a sewing machine (so its level with the table) and the drop saw as you see.

More printing, but i am at the end of that now, so apart from a couple blockages, i figured out that the PLA must have been a bit damp, as i dried it and its pri ting well again. 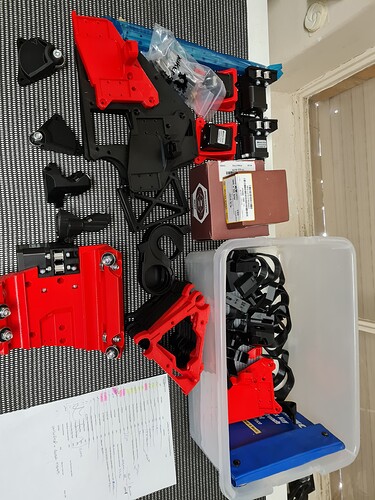 Now printing the board and screen mounts.

Now as a youtube show i watch says “when ever you build something the world grows in intelligence, ok, enough talk, back to work!”

I have that same saw (or at least close enough). I have thought about a table for it for a long time and I have never figured out something I liked. That one looks pretty good. It uses a lot of space behind it for the rails. Nice work.

the system is by a guy called Ron Paulk, search “the Smart Woodshop”, he has a lot of videos and information on the system he uses. The table I have is not a fair example of the system, YET.
(not sure if its good form to add a link, it has nothing to do with what V1 does, but hey there is enough info for you to find it.)

The main thing is that it should have an array of 20mm “dog” holes in. Apparently 96x96mm is an industry standard. He has made the system use those 20mm holes to hold more things like a cradle for a table saw. That cradle is on the list after the “wings” I am looking at making to hold the LR3.

The LR3 is going to MILL that array or 20mm holes. I am not sure that a brand new machine would be reliable enough to mill out 190 holes, so I will probably just get it to mill a pilot hole and then buy a very nice 20mm Forster bit and drill the holes myself. but we will see.

Like i said earlier the table needs to perform a lot of functions in a small space, so using the 20mm holes as mounting for the wings and then a removeable spoil board (not the best for keeping it flat, but i have limited space.) The LR3 will come off the main rail and be turned 90deg and stored on the “main” wing.

Well at least that is the plan!

what are you looking to use in place of the steel conduit they seem to use in the US?

Curtain rail from Bunnings.
I bought some pre-christmas and it was 25.4mm. I went back for more early in the new year (after I had decided to go bigger) and they had a different brand in that was exactly 25mm. There is different print options for the different sizes, but it still worked fine for me though.

Chris, you have done well, I built the LowRider V2 this time last year and opted for the SS tubeing. Despited the fact OZ is supposed to be a metric country (I got my first $ paypacket if Feb 1966) I could only buy 1" tubing ;( - am still happy playing with my V2.

I could only buy 1" tubing

I looked everywhere for 1" tubing, but ended up having to settle for 25.4 mm

Curiously perhaps, a metric sheet of ply will fit in my van, but the “other” metric ones that are 2440 long miss by an inch and a half!

Metric and “other metric” bwahahhahahahaha…

I very nearly built a v2, but that was right after the divirce and space was so limited that i was looking seriously at the MASLO, but really at the time i was.dealing with steel. So i really needed a plasma table, but space again.

So fast forwardnnearly two years and the modular design of my current iteration is a far more useabke setup for me and the space i have amd i am.likly to have in the future.

In regard to the tube sizes, i did look at the stainless tube, as its going to sit around for ages and the tube may surface rust, but a bit of WD40 when it get packed shoukd fix that. Oh and the cost of SS tube…

Well not much progress to report this week, other than buying the tube and printing some bits, but ran out of fillament.

Still have to print the SKR board / screen housing units.

Next week, i would like to cut down the linear rails and start to assemble the ends. That will be exciting.

Of cousre that means i need to get my lazy arse back in to the garage and make these “wings” for the table. And thatnmeans another 2 sheets of 18mm ply.

That brings up an interesting discussion around down draft dust collection …

OH AND seeing i am working in my brothers nice clean workshop, i really better get the dust collection sorted out.

When you have time - ask Siri or Alexa or your computer demon of choice “what is 8 foot x 4 foot in metric?”. Just because (fun internet fact) 94.7% of the world’s population uses the metric system, doesn’t mean we shouldn’t share the pain of the other 5.3%!