For those of you who read all my posts. Somewhere I posted that I was thinking about making a huge 4’x8’ table saw workbench for my 10’x16’ shop. I saw some videos from a guy in South Africa where he did that, and did a pretty good job integrating the planer, and miter saw.

I have a very love/hate relationship with my miter saw, because it cuts very accurately, but makes a huge mess, and is enormous. It’s 10" with the big arm, so I can cut pretty wide material on it (12" or so). So far, I’ve really only used it to chop, and nothing very detailed.

One idea is to build it into the top in a way that it will be able to lift out, and be replaced with a flat section, and install it somewhere in the path of the table saw’s outfeed. That would be pretty annoying, but I would at least be able to chop long pieces if I wanted to. It’s still messy, and it is really heavy, so lifting it would be less than fun, especially if I went from rip to crosscut and back several times during a single build.

The table saw is really much cleaner, and I like using it more, and I also have a pretty easy time setting it up and using it to great accuracy. If I build the TS into a 8’ long table though, I won’t easily be able to rotate it in the shop, so I won’t be able to make long cross cuts on it.

Here’s the point of this post, I’m thinking that maybe I should buy another craftsman 113 table saw, and install it at a right angle to the first one, so my 4’x8’ table would have two. I could probably sell the miter saw on craigslist for about as much as a 113 saw costs. It would take some work to get the 113 in working order, but I kind of enjoyed that the first time.

Just a crazy thought. I’m still enjoying thinking about this build. Not sure when I’ll bite the bullet and give it a go. 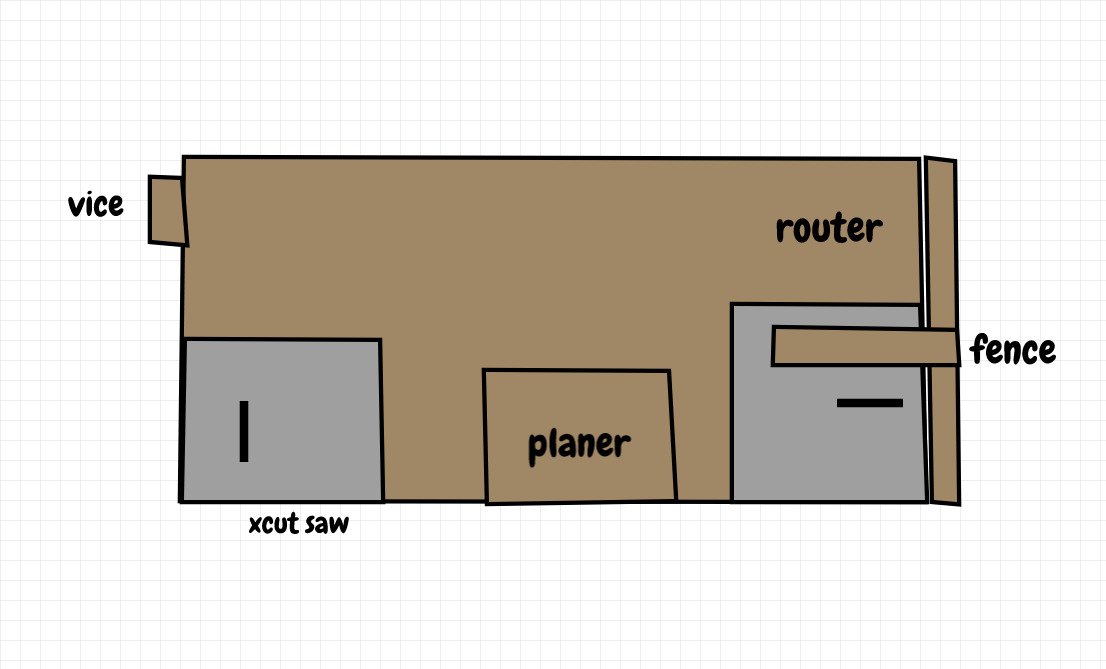 Certainly an interesting take on things. You will miss the miter saw if you ever do any non-standard cuts on crown molding though. Mine was worth its weight in chocolate and gummy bears when I had a dozen exterior window headers to replace that used crown. They had a short horizontal piece on the sides and an angled peak (gable) shape in the front. I had a chart for the in and out angles of the meeting pieces, and it would give the most bizarre sets of angles on the saw to be set, but once the cut was made, everything fit together perfectly.

How does the lowrider drive across all that stuff?

Well, I was thinking it would live on the left side, before I decided to put a crosscut table saw there. But it lives in the garage just fine.

I see a couple of alternatives here…

Get the second table saw. Get rid of the massive chop saw and get a non-sliding 12" miter saw.

The miter saw can be used on those cuts that are impossible to setup on a table saw, but can be stored out of the way the other 95.3% of the time. Plus the portability of the smaller miter saw makes it really useful if you need to go somewhere to build something.

Keep the chop saw that you have, but build a flip-top tool stand into the new stand you’re designing. That way you don’t have to lift the saw out of the way, you can just flip it under. 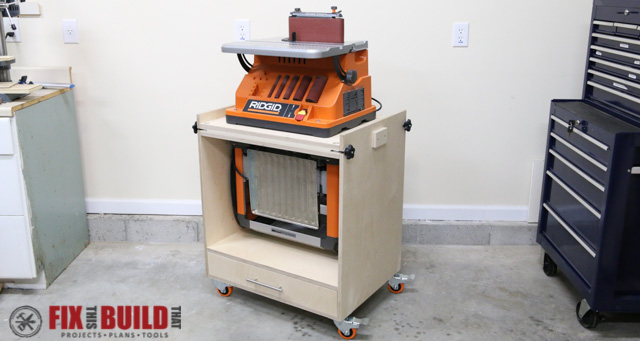 How to Build a Flip Top Tool Stand | FixThisBuildThat

Learn how to build a Flip Top Tool Stand for your workshop! Use this cart for a planer and miter saw, sander and router, etc. and free up your workbench.

Something like that, but with only the chop saw on one side and nothing on the other.

What about putting the miter saw on something like a mixer lift? http://www.rockler.com/rev-a-shelf-heavy-duty-mixer-lift

No one seems to like my 2nd table saw idea…

Those are great suggestions, but I think I really would rather store the miter saw until I’m doing something like molding (so never). I could even store it in the garage, which is where I usually break down wood before bringing it into my small shop m I suppose it could be useful like that. It is so messy though.

If I just need them close, I’ll use a handheld circular saw (which is still messy, but easier to set up outside). If I need it precise, then I’d have to use my table saw. Having a dedicated xcut saw for that would make quick work of it.

If I was doing something like framing a whole room or installing hardwood floors or lots of trim, then I would want it. But I would want it close to the work, on a temporary bench. Not attached to a huge bench in my shop.

No one seems to like my 2nd table saw idea…

That’s not true. My first option said to get the second table saw … and then a smaller non-sliding miter saw for the times you need a portable one

I often use a japanese saw (cut on the backstroke) to quickly cut a 2x4. I’ll be done before I can get the circular or table saw ready.

Jeffeb3 wrote:
No one seems to like my 2nd table saw idea…

That’s not true. My first option said to get the second table saw … and then a smaller non-sliding miter saw for the times you need a portable one ?

True. Credit where credit is due.

I often use a japanese saw (cut on the backstroke) to quickly cut a 2×4. I’ll be done before I can get the circular or table saw ready.