I never walk away, new smoke detectors in the shop, and have a new extinguisher next to my CNC.

I was meaning to reply then, but got a bit distracted. I never walk away either (from my printer and don’t intend to go far from the CNC machine, which is code for “I sometimes walk away and check back from time to time”.

I live in a strange nanny state where thanks to a recent change in legislation, as a minimum, smoke detectors are required in every bedroom and every corridor leading to a bedroom in every house, and they must be interconnected, so that if the detector goes off in my garage every alarm goes off in sympathy. This is not a happy state of affairs come testing time but it does mean I can make a cup of coffee and hear if something is on fire!

HOWEVER - since there are a LOT of houses that exist and the legislation is retrospective - the fire alarm industry came up with a wifi enabled setup with a 10 year battery. (the whole unit has to be replaced after ten years anyway.)

They aren’t cheap, but I have a wireless connectivity from the detector in my Printer enclosure and the one that is located over the CNC spot.

With the hive-mind here at work - I wonder if there’s a way of adding a wifi enabled board to a standard $10.00 detector? Does anyone have any thoughts on that?

So I was wondering the same thing recently. But then I got busy building an insulated room in my garage. I just did a search and I see others have made iot/arduino smoke detectors, so I think it can be done.

Now, I am not sure how great your legislation will be on homebrew smoke detectors though.

I am planning on looking into this when I have my room done. I really wish those balls were cheaper (the fire suppression ones).

I have a few home made wifi widgets in my house. They would be good for record keeping, but the notifications are all delayed enough that it would be useless in an emergency.

You would do best to find a way to have a passive, noninvasive sensor. You can measure light with a photoresistor, phototransistor, etc. You can measure the sound, but that usually takes more processing power, unless you get a specific detector chip.

Inside, those components (the light and the speaker) are controller by digital voltage that you could measure. I just worry it will kill the battery, or change the noise or voltage on the sensor circuit enough that it won’t trigger.

I hadn’t thought about battery drain - but here’s a commercial product chosen at random: 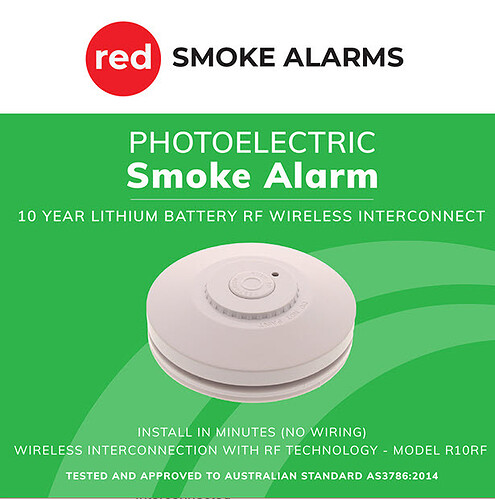 The same Alarm without the RF bits is $20 (AUD) and we can get cheapies with standard replaceable 9v batteries for half that.

I guess it’s a reasonably easy thing to do to get the smoke alarm signal to “wake up” the RF sender, but how do they wake up all the other passive detectors? The ten year battery is a thing - no wiring, no rechargeing no battery replacements.

I suspect this is a case where there’d be nothing to save by going the DIY route (for the wireless bit) in any case.

Now, I am not sure how great your legislation will be on homebrew smoke detectors though.

Absolutely not allowed - even the “installer” must be licenced!

I was thinking more along the lines of those of you without them - you could have an el-cheapo detector in your shop/machine enclosure - and a remote alarm so you could go for a coffee or whatever without being too far detached - I know many have cameras set up, but it might be cool to know when to check the camera!

I’ve told this story before. I was installing a smoke detector in the garage. I was on the ladder with a fully functioning smoke alarm in my hand. The CNC was running and I smelled the smoke, got down and killed the job, there was significant smoldering. The smoke alarm didn’t go off. I think if I had waited for the alarm to go off, I could have saved my life, but my house would have been toast.

That is why i wish those fire balls were cheaper!! I would like one over my 3d printer and my cnc.

Wow i thought thwy were like 150. I am now seeing them for 30. Nees to see what they are tomorrow.

Anybody use these? My fear is they seem very CHEAP, considering others are a lot more!! 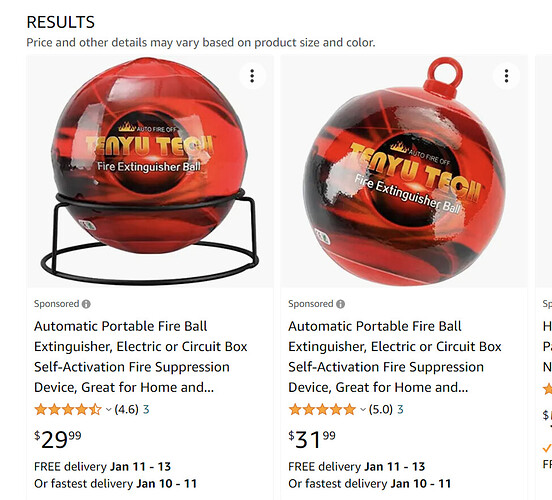 Well after watching this, I guess i will not be buying the 30 dollar version: That’s about $42 US which is in the ball park for others I’ve seen on Amazon that are actually available (but they won’t deliver to AUS - and they don’t meet AUS standards)!

I love how Amazon bargains turn up from time to time and magically are not available! There are a few at around $35-37 though.