I’ve got my MPCNC all constructed and i’ve started working on wiring.

I purchased the MPCNC build kit from the V1 store. SKR with TFT screen.

I briefly turned it on yesterday and it was fine but the screen didn’t come on at all. A few lights came on on the SKR.
When i connected the USB A on the SKR to my PC, after several attempts I was able to briefly connect using Repetier Host per the docs then a loud continuous beep came from the TFT.

Today I go to plug it in and the SKR starts smoking from the highlighted points in the attached picture. As soon as it started smoking i immediately disconnected… here’s to hoping the board isn’t fried…

I’m fairly certain it was all hooked up correctly. I re-read the docs and double checked connections several times before powering up.
Any help would be appreciated 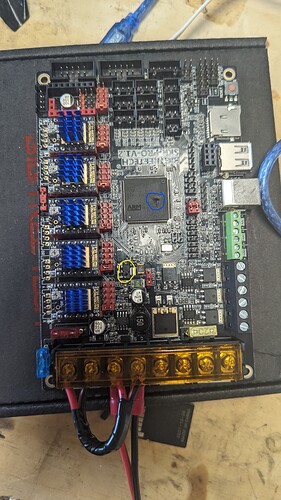 Generally that happens when you get a short. Could be on the endstops. Board is toast though.

Figured that much. I guess I was moreso curious what could have caused it to prevent it happening with a new board. BTT says a 2-3 week turn around time.

Looking at the board, it seems like i slightly damaged it when removing the molex covers from the motor connections. Think that could have done it?

Worth getting new drivers as well? 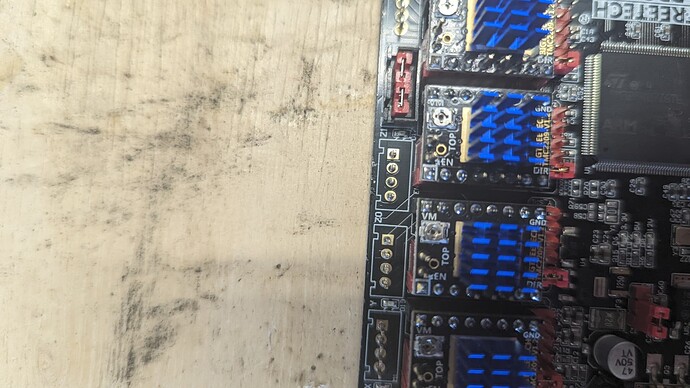 Looking at the schematic, the yellow circled chip is the 3v3 regulator (U4). Unfortunately this 3v3 rail goes to many places on the board including all the stepper drivers and all the limit switches, it is supposed to be protected by a 250mA fuse (F3) but that, along with the reverse protection diode (D23), look intact. I think I would check to see if the 3v3 rail is currently either short to ground or the +12V rail (check on the F3 fuse) and if it is try removing the stepper drivers one at a time to see if one of those is fubar. Also check each of the limit switches and their wiring to see if any are shorted to ground.

Judging from the hole in the MCU and the intact F3/D23 my first guess would be one of your stepper drivers went bad and applied +12V to the 3v3 rail and your MCU popped.

Thanks Mike! This is hugely helpful.

The steppers are all brand new and I didn’t even have the end stops hooked up.

I’m thinking it is definitely one of the accidental bits of damage to the board from removing the MOSFET shrouds.
Here’s to hoping the short didn’t take out my driver’s too

Also worth noting, none of the fuses are blown. That’s the first thing I checked.

If you don’t have a proper housing, I’d suggest you find/print a set of stand-offs and make sure your board isn’t just laying on whatever flat surface you have lying around (and whatever is on top of that). And remember that the anti-static bag the board came in is actually more conductive than the cardboard box it was packed in (it’s designed to “wick away” static charge, after all).

But then again, this is from a guy who tried reseating a HDD controller in a running PC back in the day… Learned the RMA procedure that day.

Yes, I have a case for it! Only have it out for initial testing… I’ll be installing it first thing in the case this time around lol