I think I could have taken a few extra days off each year if I had marketed/treated the ZenXY table differently.

It isn’t too late. Sisyphus has a good handle on the high end. This homedics is going to corner the “impulse purchase”/costco market. V1 and your garage could be the place to buy a kit.

The major obstacles are still:

I have such a hard time estimating the demand for something like this. I know I would love to see a kit like that. But I also make mechanical keyboards. I know I am weird.

Any suggestions on making a more consumer friendly version of the MPCNC?

I get the impression that something like that would be an entirely new set of lessons to learn. I have no idea where to start.

The mechanics of something like that seem like they would have to be completely redone from scratch. The software and instructions are really where the regular home depot user need the most help.

Yeah I never really spent much time finalizing or standardizing the Zen. We hit the board hitch and supply issues, I stopped at that point. Probably need to move this up the todo list a bit. I think the boards are more readily available now and and IKEA hack is probably the best option of doing that!

The FluidNC boards are back in stock, but only 4 are currently available.
I agree with the comments. A common table that is available would be the easiest method to get some good directons. Some of us are not HUGELY tech savy, and like easy access to components. Before anything, if you plan on using Bart’s boards, I suggest contacting him to make sure he plans on continuing to stock them. The plans are open source, but I like to help out the original builder, wherever possible.

For many people the Homedics “table” has a “cool” factor, but I think most will balk at shelling out $400. I expect to see them deeply discounted in about a year, selling on Woot! or other deal-a-day sites for <$100. You’ll be able to pick up the few that do sell at garage sales for $20 in a year or two, alongside the lava lamps, tabletop water fountains, percussion massagers, TENS massagers, and all the other stuff that is supposed to aid “wellness” (whatever that is).

The wellness sales pitch is definitely an interesting one.

I have read a few reviews and they do baulk at the price. But they aren’t comparing it to a sisyphus or a custom made table.

$400 is a lot, when the same store has pretty big and pretty good TVs for less than that. $400 is in between a nintendo switch and a ps5. Both of which probably offer more hours of entertainment.

But also consider that there are some curtains that cost $400. Or clothes, or meals. Luxury money means different things to different people. I don’t want to pay that much for curtains. But a dentist, physiatrist, or lawyer’s office probably wouldn’t think twice.

Probably hit the nail square on the head there. Costco does sell to a lot of small business owners.

You mentioned a tear down earlier… maybe I should ask that AvE yt dude to do it… he has done similarly themed tear downs in the past, like the Juicero or whatever it’s called. He is also very in to cnc.

Wood veneer and legs so that it’s a (small) end table would go a long way toward making it look more high end. Its smooth plastic appearance makes it look cheap to me.

A $400 doodad is tough but a $400 piece of furniture is easy. Except maybe around the buy-stuff holiday, when it might be inverted.

Your wish is my command. I took mine apart to lubricate it.

It won’t let me upload more than one picture, so I’ll have to post twice. 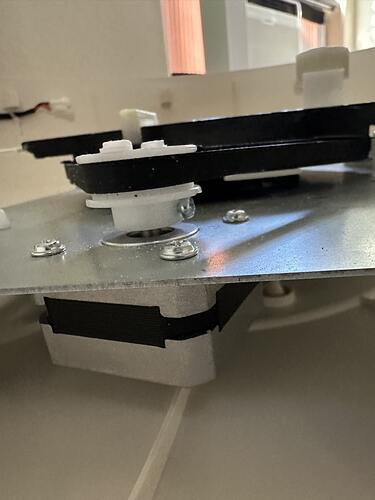 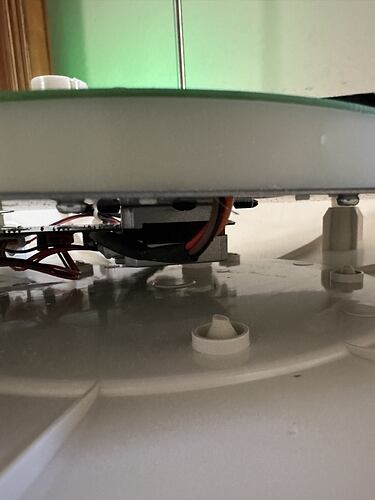 I took a video of the inner workings while I had it open. The forum won’t let me post the video here, so I’ll try obfuscating the link. If you really want to watch it, you’ll figure it out. Interesting. Looks like they aren’t any moving electronics. The endstops look like they are has effect sensors. Definitely not a scara.

That is cool. Thanks for showing us.