Quest for Most Rigid Lowrider 2

Small is the name of the game…or at least in this game called V1 CNC.

Was happy with my MPCNC churning away parts but there were always things I was not happy about. One thing I could never get fixed was the fact my edges were never perpendicular so tolerances were a pain sometimes and drilling holes on the sides of parts was a hassle. Other than that, perfect!

I want to try something new and hopefully quicker and more accurate. I am very curious as to how well it will perform compared to my already small MPCNC. If there is not a big difference in possible cutting speeds I won’t be that upset. There are other benefits.

My overall build size uses a 2’x4’ table which appears to be one of the smallest lowriders made. Nothing I work with is that big and it will have about 2.3x more cutting area than my MPCNC which took up pretty much the same space. Sounds goods to me! Router will be the 611 I still have to buy.

I bought 304 stainless 049" pipes but upon measuring them, they’re not that straight and some of the pieces are ovaled pretty bad, at least 2mm difference in diameter in some areas. Looking into getting a refund or exchange because I payed $99…bummer. 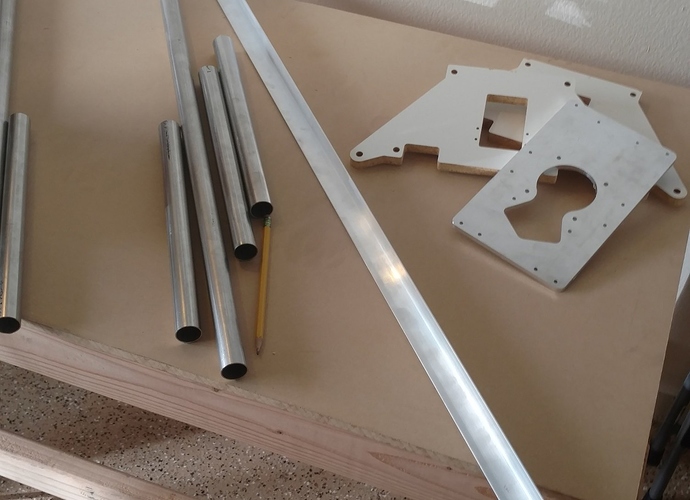 Out of curiosity when you mention parts, are you planning on attempting the same aluminum cuts you have done on your MPCNC?

Yes most likely and also some thicker 3/8" pieces that I had trouble with on the MPCNC. It could cut them fine but it would always leave a slight angle which made drilling side holes next to impossible because the bit would always walk even with a spot drill.

Weird, I was thinking about milling aluminium with the lowrider, really excited to see how this goes.

Got almost the whole machine put together, just tuning and putting on belts

Question likely geared towards @Ryan or maybe someone who has built the original Lowrider. How does the X axis get restrained? It sort of bugs me that the X axis has no real rails to be guided on, instead relying on the table edges to do that job. I feel as though it is almost necessary to somehow guide the wheels instead and not let the tubes touch anything, just freely hang. Otherwise it is hard for me to imagine the axis going straight consistently unless the edges of the table are completely straight, smooth, and maybe greased.

I am noticing quickly that the assembly process is quite a bit different than the MPCNC. It is more “feely” and you have to really play around with the sides to get them aligned.

That being said it does feel really rigid and I can’t really knock it til ive actually cut something. I just feel kinda nervous and not so much excited because I basically took apart a working machine to make one that’s new and not as documented.

My tubes almost touch the table sides, but don’t. I just cut a 43 inch diameter circle and it always hit the beginning point. You want extra friction, not less, so no grease! As long as your Y plates are square to the tubes, it shouldn’t try to wander. I know a few people have added tracks to help keep it straight, but so far with either of my lowriders I haven’t found the need. I do however keep the Z tubes really close to the sides, just in case. Always run it back and forth it’s whole travel distance first, just to make sure it’s running straight, and you should be good to go.[attachment file=66486]

Agreed. Make sure your stop blocks are square (draw the largest square your machine can handle to verify). The rails should kinda touch so it doesn’t wander, even though it should not, I make sure one side is always set again the table never really paid much attention to the other side. Always drive past your cut, or you can air cut the outline of your part before the actual cut to make sure no binding happens (I have snagged the vac hose twice).

The first few test I would drive it past my part dims, measure back to the stop blocks just to triple check square. I don’t do that anymore. It does feel oddly unconstrained but it should have no reason to wander. You can add an angle of aluminum or steel as a constraining track and to keep stuff out of the wheels. So you would have the track at the edge wheels riding on it, tubes rubbing it but the angle up to block stuff. It seems like a good idea but I use my table for everything so the angle would get in the way, or damaged for me.

The quest continues, this time with a major success! 3/8" 6061 aluminum cut. 6 minute part time. I tried to perform this same cut with the MPCNC a loong time ago with a lot less clean of a result.

Consistently hit within the .1mm. For a router made of plastic and sketchy tubes I bought, not bad! 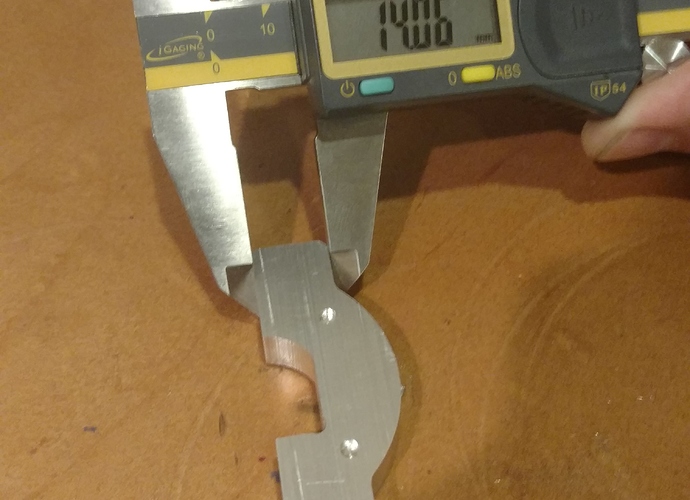 I am in the processing of printing my LR2. I want to cut 5052 aluminum sheet metal on it 1/16" thick. What are the recommended speeds and feeds? I have been using a single flute upcut. 4mm cutter by hand with templates and it works very well. Used to use 3mm bits but I broke a lot. I can easily apply a good 3o lbs or more of force to a palm router and get fast cuts. I’m sure the machine is going to be much slower but steadier.

I think i will have to switch to downcut bits to prevent picking up the sheet? Dont’ really want to double side tape the whole thing down. lol. Though I have done that and it works great for small pieces. Especially if it has a clear pvc cling wrap on the aluminum because it comes off so clean.

I also read that you must “ramp” the bit down because a straight plunge tends to break the bit. Any tips you can offer would be appreciated.

5052 aluminum is kinda meh for machining compared to 6061 but if it is a hard temper u might be okay. If you want excellent results, I recommend gwizard for your feeds and speeds.

I cannot give magical numbers but start off on a low depth of cut. Dont slow down ur feed rate too much or you will just rub and the aluminum will fuse to the tool, especially a softer alloy like 5052.

I dont’ have much choice in the matter. 6061 aluminum sheet metal is extremely rare. of the 4 or 5 metal distributors in charlotte, nc, I only know of one that stocks it in 1/16" thickness. All the others have a minimum 1/4" thickness.

if i am cutting 1/16" would you do it in two passes? or one pass or one pass using trachoidal milling? When cutting by hand I just give the router a push and it cuts through like butter. Unless I jam the flutes up in which case it wont’ cut anything until I clear it up.

From your first pic, what size aluminum angle did you buy to span the gantry for vacuum hose? I was looking the other day at 1", 2", etc.

1 or 2" angle both will work, just depends on the size of your hose. 1/16" thick wall is fine because its only holding up a hose which is lightl

called my aluminum supplier to order some 6061 1/16 sheet metal today. they told me not in stock, special order 1500 lb minimum. So like I thought basically it is not available anywhere.

Aluminum angle should be available at any hardware store, very common material.

That looks like an excellent result on that part… I’m here doing some research. I want to build a CNC machine, and I’m trying to decide which one. I’m leaning towards the Lowrider. Since you’ve had experience with aluminum cutting on the MPCNC as well, do you find one is better than the other for metal cutting??

An you tell me the bit you used to cut this, and the doc per pass. And feeds and speed please

What mill/feed/speed did you use?