I freaking love it. How the heck are any of those other companies going to justify $1000+ for there “dumb” printers?

There are so many new features I am going to have to spend some time looking into them. No endstops? Those drivers must take some serious programming. His new firmware will be interesting. Detecting layer slip…

I wonder if I can get the new boards (if there is even firmware) and if the rambo’s will be any cheaper now.

The fiament sensor is pretty amazing. Its able to detect flow.

And its going to be super handy for the people in the facebook group that keep posting their plastic blob nozzel monsters.

Tom got a close up of the new board. 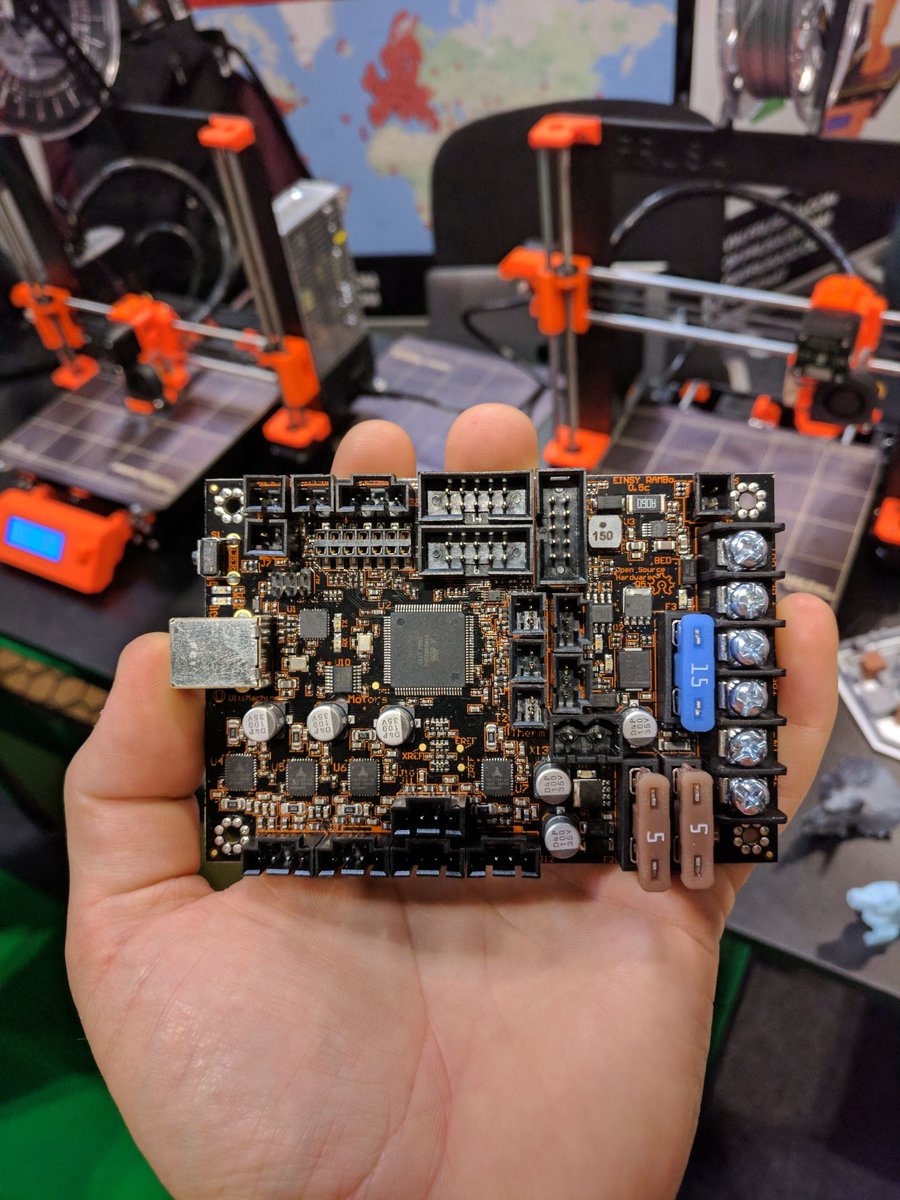 We need 1 more driver on there for dual endstops.

I can’t believe the no endstop thing has been sitting in the firmware for a while? How the hell isn’t that more popular, I thought he invented it, turns out he just implemented it…dam this industry moves fast.

How does it even work?

I can only assume it sees a current spike when the stepper gets obstructed. But it must only be on when seeking an endstop or I imagine any hard accelerations would trigger it as well. Hope it doen’t need to bash a solid object to trigger.

I wonder if I can get the new boards (if there is even firmware) and if the rambo’s will be any cheaper now.

I asked Josef about the availability of the new boards. He said he would eventually have spares on the site and Ulti should also release. He also said the firmware is pretty specific and didn’t think marlin in its current form would run on it. As far as the Rambos getting cheap, I would imagine so, Prusa was a pretty large consumer.

They just told me they are trying the Archim boards with the trinamic drivers, that will be cool as the new Marlin 2.0 seems to be integrating the 32bit boards into the main branch finally The archim has daughter board capabilities so I am not sure how different the two really are, same company, same drivers, similar capabilities…

Are they thinking at all of a mini Archim?

Not sure. To me that board is by far the best bang for the buck, when it gets support. Right now I can’t get the LCD to work right, and they even sent me a patch and it still didn’t work. I might have seen the issue but need to focus on the dual endstop right now.

I just saw they made a formal request to Thinkyhead over at Marlin to support Archim. If it gets pulled in I see no reason not to use it. Not exactly sure what that means, but he did add it to the ToDo list.

Well this happened. Just add motors and rods. If you happen the have them layung around…

You have asked for it. We have always listened. Even though almost all the components are needed to be replaced, it will be possible to upgrade from MK2/S to MK3S. If you don't need a full MK3S upgrade, you can use our upgrade to MK2.5S. It offers...

Yep. Pretty much. Would love to have some of those new features but cant justify the cost to upgrade from the MK2S currently. Maybe later once the printer is in a more permanent location and if I get tired of hearing the y axis vibrate during faster movements.