So I’ve had a few problems that I’ve been able to fix:

I’ve also check to make sure it’s extruding the correct amount of filament and as far as I’m able to measure with my calipers it appears to be extruding 100mm when that is what it is supposed to extrude.

I was also having it miss steps or the belts slipping, I’m not sure which. I tightened both the Y and X axis belts 2 clicks on the zip ties to see if that would help. I’m not sure it has because of the other issues.

I took a video and posted to YouTube https://youtu.be/QI2FuoQQx3k so hopefully someone can see what I’m doing wrong. I’m using the slic3r settings that Ryan posts on the Extruder Assembly page.

I hope someone can help me figure this out. I know it’s something I’ve done wrong with my build but I’m totally out of my element here and “research” can only get you so far. If I could, I would fly Ryan out here to fix it! lol.

Edit: In going back and looking at the video myself, it looks like the bed is doing that bouncing when the print head is going over and area on the print that has built up too much PLA and is too high on the Z Axis and the head is bumping over it. I think the bouncing in the bed is more of a symptom of whatever problem I’m having then the cause (but I’m not sure). The test cubes I’ve been printing out aren’t that good - they aren’t terrible, just not what they should be.

I can’t find your other thread but now the bed is moving because of the extruder rubbing the print. I can’t see your Z rods, but try moving the Z axis 100mm and make sure it is exactly 100mm, actually test every axis.

Can you do two favors for me?

Ryan’s suggestion about the Z axis is good advice. It should move 100mm when you ask it to move 100mm.

Thanks guys. I wasn’t sure if new threads were better then one continuous one, but I guess since it’s all the same issue, then 1 thread makes sense.

I will try to get some pics of the hot end up soon.

Good suggestion Ryan, I never thought of making sure it was moving the amount I was telling it to. I will test that soon as well - once my kids let me. lol.

I just did some measurements with my digital calipers to test movement distances.

I made repeated measurements to try to get an average just because are variables in me holding the calipers and the calipers themselves (Harbor Freight - Mitutoyo calipers are a little more expensive that what I want to spend on something I don’t use all that much, but I am starting to use them more so it might be worth the investment). I used Repetier and moved in 50mm increments for all axis because that’s the largest it can do without me sending Gcode commands (it’s just easier to hit a button each time to repeat the tests).

My Z seems to be the most accurate whereas my X and Y are definitely not. My belts are pretty darn tight without being guitar strings. I’m definitely at a loss as to what is going on. I’m thinking of running a 200mm 1 layer square test to see what that does but my first layer is still having problems sticking. I’m not sure which problem to tackle first - the stepper motor movement, the layer not sticking or working on getting my bed as level as possible.

I wish I had a way to more accurately test my movements other then just holding my calipers steady and using the printer itself as a stable rest for them. An accurate laser measure would be awesome. Lol.

Anyway - any thoughts as to what my next steps should be?

Jeffe - here is the best pic I can get of the washers. Basically I just put 2 washers between the heater and the bottom of the cooling stack to build up a little space so my extruder tip could screw further into the hot end. Before, the throat was taking up too much of the heater threads and the extruder wasn’t really in the heater itself so I think my filament was cooling before it even hit the bed. 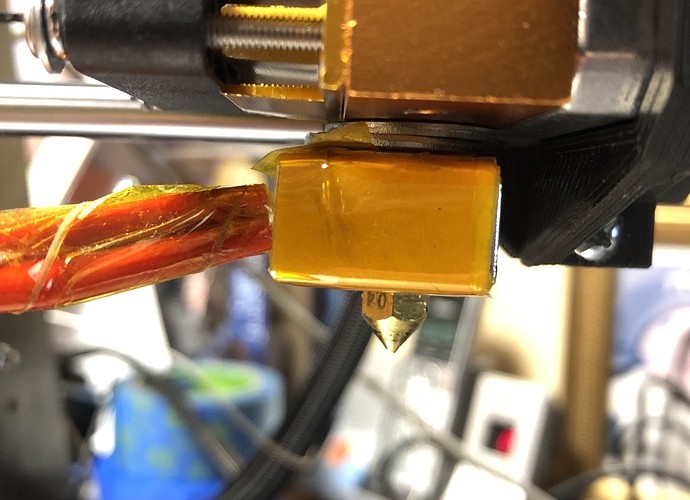 Here is a pic of the standard MK8 extruder:

Notice the gap between the hot end and the extruder? That’s what the nut is for to hold them apart. If you have your hot end too close to the body of the extruder it likely won’t cool correctly. 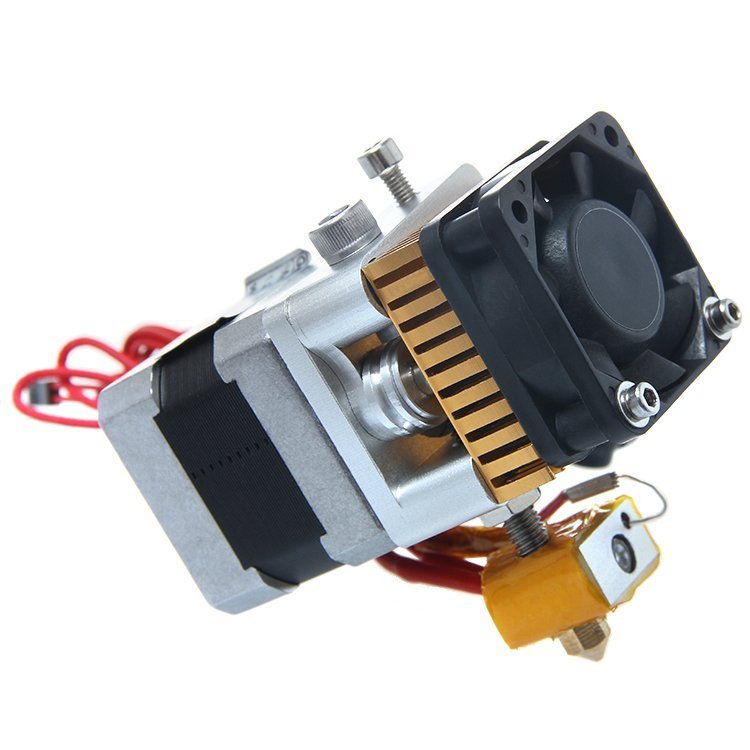 Those numbers are all close enough that the steops are probably right. I don’t “calibrate” the steps/mm on XYZ. You’re just looking for obvious problems like 20% off.

You should have a gap between the heating block (which is wrapped in the kapton tape) and the orange cooling block. Just take those washers out and leave the gap there. The cold side keeps the filament hard enough to grip. The hot side melts it just past melted. The gap is important to keep those two things separate temperature wise. There is a nut that keeps it at the right height.

I’m not sure which problem to tackle first – the stepper motor movement, the layer not sticking or working on getting my bed as level as possible.

Get the bed adhesion enough to print the cube, then focus on the cube. After the first 2-3 layers, that thing should be laying down smooth, even thickness layers, and even if there’s a little bumpiness on the sides, it should be 10x smoother than what you showed last time. The nozzle shouldn’t be bumping or pushing down on the print either. None of that is due to the bed.

It’s a little bit of cat and mouse, because if you’re having temperature, extrusion, or mechanical problems, you can’t finely tune the bed. If your prints aren’t sticking, then you can’t work on that other stuff. If your temps get too low, then the extruder has to work harder, if the temps are too high, then the plastic can get sticky and droopy. It’s not easy to isolate, I’m afraid.

A couple more questions, and comments:

I’m glad to know my steppers are ok and the variance is within spec… Now if I could just get the damn thing to print properly. lol.

Any advice on bed leveling? I’ve heard mention of the paper trick and I’m guessing it’s just leaving a small enough gap between the extruder tip and the bed that a piece of paper can be pulled out but with friction on it?

Also, in the video I posted - was all the noise and racket coming from the printer “normal”? I know some of that noise was from my power supply not being firmly attached to the printer and it was rattling around (I have to secure it better) but it also sounds like some of it is coming from the bed. I’m also going to look into that entire assembly again and make sure I didn’t forgot to tighten anything else.

You should use the nut, or a replacement if yours didn’t come with one (6mmx1 maybe?). Without it if you don’t have your wiring really solid it can move the hot end a bit, and any movement turns into clogs because the molten plastic fills in the gap between throat and nozzle.

The paper trick is just as you visualize. It gives you a known good level, albeit at the paper thickness. Often suggested is to use a business card mostly because they are stiffer and won’t have as much tendency to bunch up if you’re pushing it instead of pulling. I use grocery store cash register receipts, because they are really thin, which gets me closer to the ideal 0.00mm clearance. They are flimsy though so you have to be more deft in moving them around. Remember with the three point leveling you do front to back first, then side to side.

The noise sounds typical of 3D printers. What did you end up for the various feedrates, i.e., first layer speeds and later layer speeds, perimeter speeds, etc. The first layer wasn’t on the video, but this short video looked like you have the hotend moving at a good clip. You should also check your accelerations as that can also affect corner adhesion on the first layer (you don’t want them too high, but also not too low - you’re looking for the goldilocks of accelerations but it’s a fairly big range for just right).

Thanks for all the input. I will have to look at what I had for setting but I’m pretty sure I have slic3r setup the way Ryan suggests on the bottom of this page: https://www.v1engineering.com/import-extruder/ but I’m wondering if those are best for the MPCNC and not the MP3DP?

Another question I have - what should I be using to grease the smooth rods and the T8 Leadscrews with?

Don’t grease the rods. The bearings have grease. For tge threaded rod, I used bicycle grease.

Thanks yet again Jeffe!

ad to know my steppers are ok and the variance is within spec… Now if I could just get the damn thing to print properly. lol. Any advice on bed leveling? I’ve heard mention of the paper trick and I’m guessing it’s just leaving a small enough gap between the extruder tip and the bed that a piece of paper can be pulled out but with friction on it?

I don’t know if it is cheaper or not but I use garage door screw grease.

And I use white lithium grease… To each their own, I guess. It’s more ‘what is handy’ than ‘what is best’.

And I use white lithium grease… To each their own, I guess. It’s more ‘what is handy’ than ‘what is best’. ?

I think this is what my bike grease is, but I bought it from a bike shop that was close by.

Lol. I have all different kinds of grease lying around. I guess I will grab the white lithium and use that - since it’s what I used on my LR anyway.