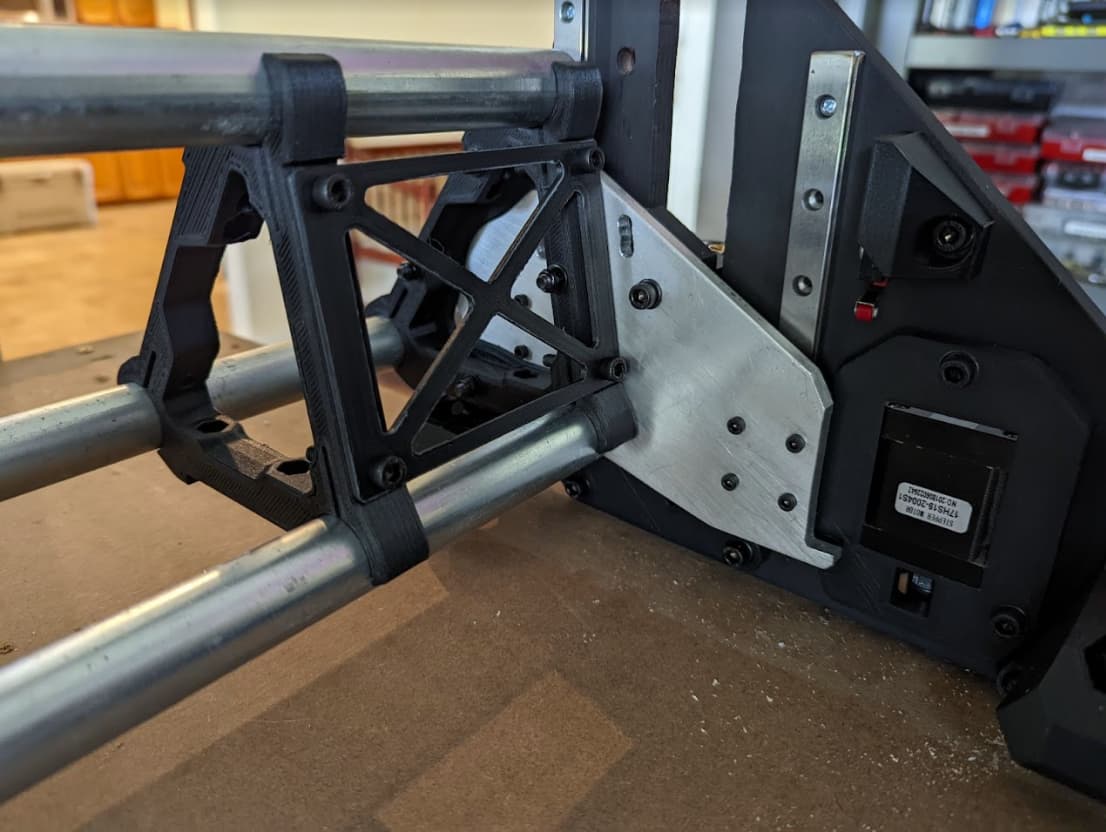 Wha wha what? Did you decide against the strut plates? With three I don’t think you need them nearly as much.

Speed is the key. You have to just get the tubing going really fast and it will fit the third one in there.

I had something about lube, but it slipped my mind…

I’m still working on mine (if you’re asking me), I fully intend to cut some strut plates soon, I just got my table put together.

I like this option. Do you have any idea if it’s as strong as using struts?

I’m halfway through printing my parts when my ribbon cable died and took my extruder board with it. Awaiting the replacement now, then back to printing. I received the last of my needed parts from Ryan yesterday. I’m looking forward to assembly.

Here is a thought for the frame of my table. I’m not sure how crazy this is: 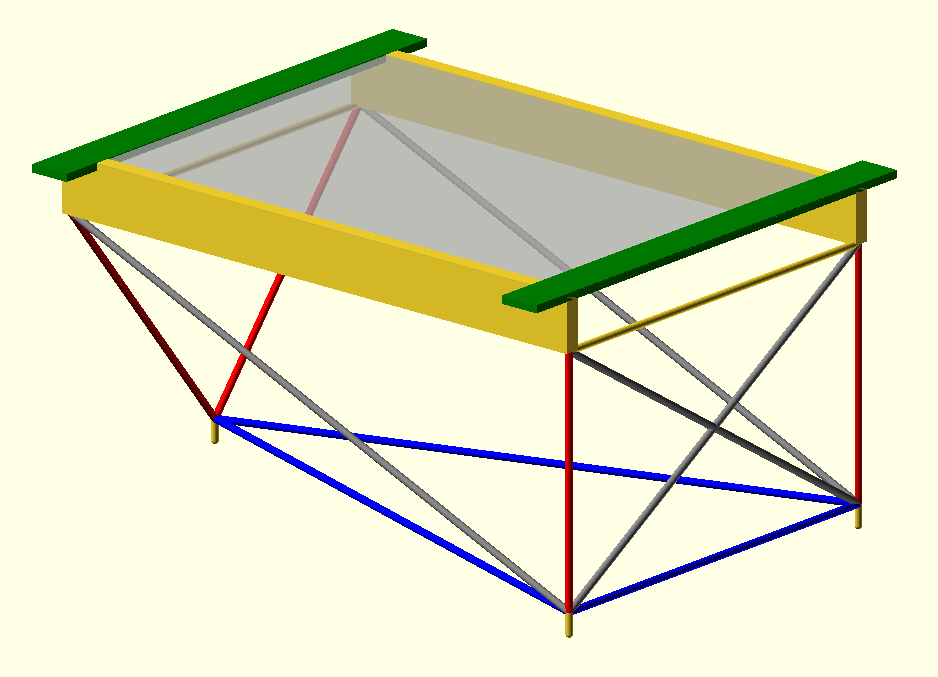 The top is entirely open and some removable ribs (not shown) will be added to support the spoilboard. The frame supports those ribs, but the frame is not depending on those ribs for structural integrity.

The frame top is two pieces of parallel 2x6 lumber that run the length of the Y axis with plywood “wings” (shown in green) to support the belt holders.

The rectangular top has legs (shown in red) to a triangular bottom (shown in blue), and three feet. (The feet are just notional and could be wheels or something.)

Some cross braces (grey pieces) provide support against racking and I think they stiffen the top surface in torsion too.

The plan is something like a truss where all the struts are 1/2" conduit or something that is stiff axially but does not need to be stiff against bending.

The problem I am trying to solve is torsion of the table top that occurs when you put a four-legged table on an uneven surface. The surface in the yard will be extremely uneven (grass, dirt, maybe soft dirt), so one concept is that three feet can’t impart a torque to the table top. The table does have some chance of tipping if the weight is badly distributed at the +Y end, so that’s a hazard I will have to watch out for.

A torsion box with three legs is a possible solution but I also want to have an open frame to be able to surface slabs or cut joinery on the ends of boards. I am not 100% sure of my truss design but on paper I convinced myself it should be pretty stiff in torsion. As a side benefit, it doesn’t use much material, but that’s not really a goal.

What am I not thinking of?

Really interesting ideas. Was concerned at first, but am increasingly curious to see how your project turns out.

Are those gray braces EMTs that’d cause torsion/twisting, undermining being able to have a plane supported by just three points? Or, are the gray cross braces adjustable length (like a curtain rod but stronger, e.g. 1/2" EMT within 3/4" EMT, fastened with… grub screws).

Will material and tools on top be applying downward forces/vibrations that result in torsion/movement that still need to be handled, dampened and transferred-to-ground? I like EMT. Would be neat to see you end up with relatively light weight, possibly storable solution. Was contemplating building Torsion box with 4 removable legs, 3 rigid, 1 adjustable length. Ball pivot mounts, with limited range, to torsion box. Are you looking to 3D print and/or CNC fittings for your Workbench? Or, you planning to use something like Maker Pipe fittings, they seem strong and reusable/adjustable. Maker Pipe do a good job of gathering and sharing community concepts/builds to inspire others, e.g. DIY Electrical Conduit Project Ideas | Maker Pipe

Honestly, my first thought/concern was… 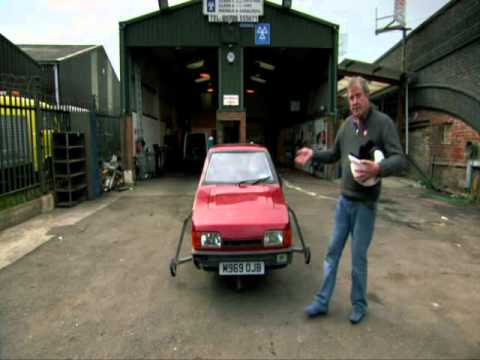 Full disclosure: Am a software engineer at best, and know squat about Mechanical Engineering. Look forward to reading and learning from others' ideas/perspectives...

Looking at just the top:

Looking at the base:
I’m looking through the different support sections and imagining the tubes being infinitely strong to compression, weak to tension and almost no torque from the joints:

My fear is that the connectors won’t be terribly strong in tension or for applying torque at the joints. I cant imagine them being terrible at compression. Maybe adding another cross brace on the long sides would be enough. I would also consider making the bottom out of something like 2x lumber that can be screwed together. But the bottom shouldn’t really be doing that much, so it depends on the connector mechanism.

The nice thing is that you could do this iteratively. If you had that in your yard and you noticed a direction where it was soft, you could add in more. Either corner braces or tubes or screws.

I also agree with your logic that things like uneven ground won’t affect the alignment much on the top. Putting it on a hill might. And just reassembling things may make things slightly different (enough to notice if you had flattened the spoil board). But in general, it would be good.

I agree with Jeff the connections are probably going to be the hard part. The rest looks good to me.

The other route is put more effort into a ultra rigid torsion box table with the removable section you want and set it on a triangular base instead of supporting all four corners. Now that I write that there is not much difference in the structure but at first glance it seems to me like it could introduce less twist into your table. 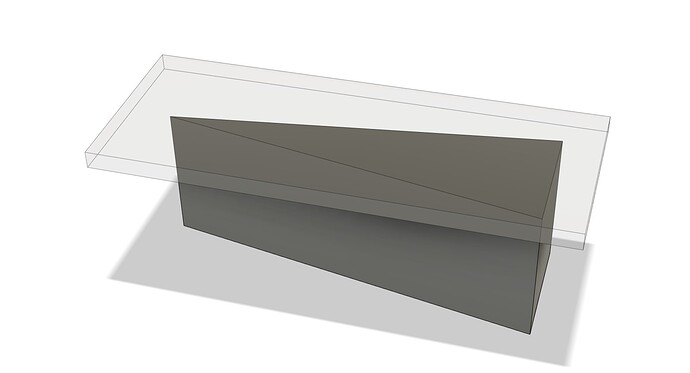 Using bessel / airy points, could make a for a table that needs slightly less heft to keep it flat and a smaller base. There is so little actual force on the table, and it is almost always evenly distributed. Put the effort into the table box and any base will work fine.

Man…brain twister. I might print out a 3d model to see how it feels. You might be on to something here. I feel like the grey bars could mess with the back end. Decoupling the front and the back feels right to me, but does it actually matter since it is triangular? Might be too early for my brain.

Hrmmm… Gut reaction is that triangles in as many places as possible is best, to avoid over-constraining the planes (I’m reminded of a TikTok of three workers carrying a large sheet of glass, and the second a fourth worker touches the glass, it shatters from the torque), since, as you mentioned, you’re dealing with uneven terrain; the key is to arrange them so that you don’t reduce the support too much in any one location. Perhaps multiple columns, rather than trying to force one large one?

Thanks guys for the input. In no particular order:

Other parts are coming along nicely. I’ll post an update on those soon.

I keep forgetting that I need 6 drivers. I’m thinking of wiring Z in series to start with, and staying square in XZ by parking on some blocks.

I am also thinking that the second tool will home toward -X and touch off the first tool, instead of homing toward +X. My thought is that this will produce a more consistent offset between the tools, which is critical. For example if belt tension changes over time, homing on opposite ends will see a larger relative error compared to homing both toward -X. 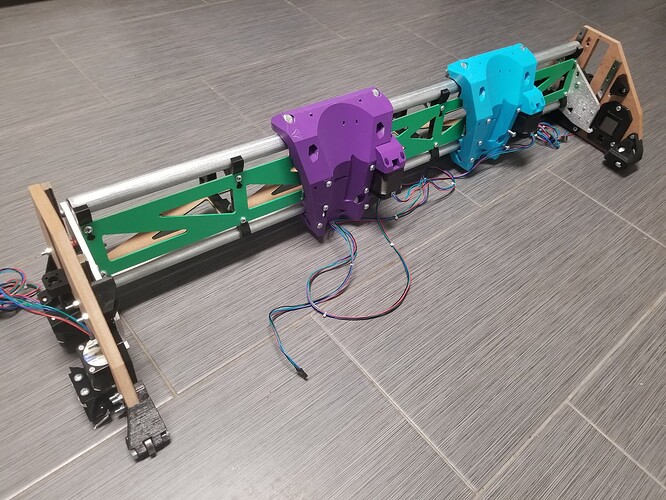 A bit over-eager in assembly and probably going to need partial disassembly to add endstop wires and belts, but I couldn’t wait to get this together.

I didn’t initially add the three bolts to attach the XZ to the gantry beam (instructions said I could add them later). I found I had to partially disassemble to add them. I’m assuming the access holes in the YZ plates have been enlarged but the DXF I used still had the small holes. No biggie, just a couple minutes.

All in all, it’s been really smooth. I maybe should have used a finishing pass on the YX plates and truss plates because they are slightly oversize (undersize holes) which has made it a bit of a tight fit, but that only slows down assembly slightly.

Soon I will have no choice but to tackle the table.

So my take on this is both are going to do the same thing, correct?

Yes in the sense that they will both have routers and cut stuff, but the point is for the two routers to have different router bits and tool paths. Generally they will take turns, not cut out two copies of the same thing.

Which reminds me, I will need a couple more solid state relays if I’m going to turn them off when they’re not being used.

OHHHHH, cannot wait for the youtube on this one, that sounds COOL!!!

Update: I bought some 2x6 lumber and I am changing my mind about the table.

Connecting all those struts at odd angles in the previous design was making me nervous, so I’ve reverted to a simpler, more traditional style, with a short table top at each end made from OSB. The table top is outside the working area, and is for convenience and perhaps more importantly, stiffens the frame from racking in the X-Y plane. 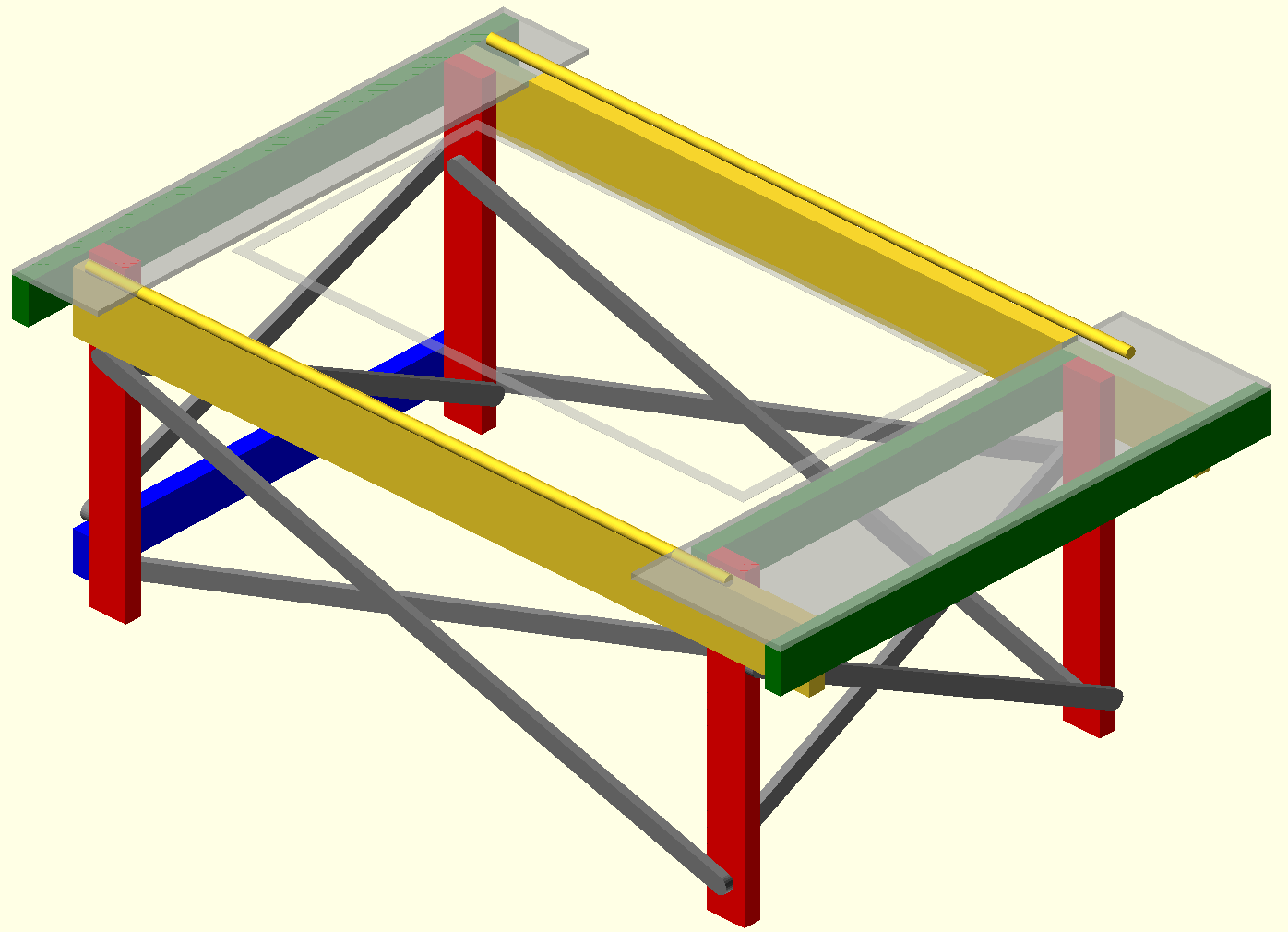 I’ve decided I’d like to use a rail on the left side (negative X) for a hard, straight surface for the bearings to roll on. I don’t have a good way to make a 2x6 perfectly straight, but with shims, I can tweak the rails on both sides to be as straight as I can measure. We’ll see after the humidity changes.

Using a left-side rail means the supporting 2x6 has to be offset downward relative to the belt ends and I’ll need a spacer between the left 2x6 and the table top. On the right side (positive X) I’ll need cutouts so that the top surface remains flush with the top of the 2x6.

Without the diagonal braces (grey) I’m predicting the table will be very floppy in torsion. I am thinking I’ll shim the feet until the top is perfectly planar (two rails are parallel), and then add the braces. After that, I’m thinking it should be stiff in torsion.

When I go to move the table to a very non-flat floor, I can support it at the middle of the far end (center of blue beam). I can either use it while it’s supported in the middle for a somewhat unstable three-legged stance, or I can shim the feet for a four-legged stance that remains flat.

I am comfortable with this idea, and I have all the lumber and hardware, so now I just need to do the work.

I don’t have a good way to make a 2x6 perfectly straight,

Yes shims will do the job, but maybe the use of mason ruler could help on perfectly straight. I saw 2 different way :