I currently have a modified MPCNC that is about 4’ by 2.5’. See the photo below.

While building the LR3, I put it into the MPCNC enclosure just to keep it out of the way while I clear space in the shop. Interestingly, it’s almost the same size. So I’m considering making a short rail system for the LR3 to ride on, and replace this existing MPCNC (and rebuild it to the original size).

One thing I like about the MPCNC is that it cannot lift off in the Z direction. I’m told there is not much resistance in the Z direction and the weight of the LR can overcome the force, however in a bench configuration, I’d really like this short axis to be positively connected to the table.

I’m still pondering the details, but this would provide lateral and vertical support. 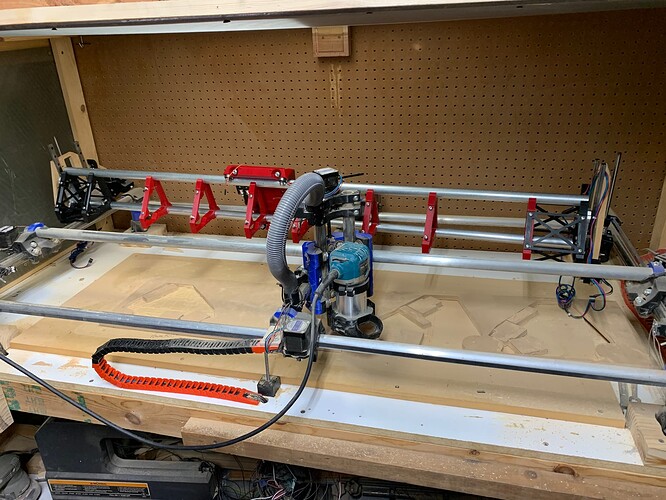 I think you are trying to solve a problem that doesn’t exist. I know it feels wrong, the LR1 was fixed in the Z. It is simply not needed. The weight of the router alone easily plunges into metal, then add all the rest and the fact that we never plunge that fast, there really is no need.

An upcut bit actually pulls down, not up.

But if you really want to. It is your machine. The LR2 gantry trucks are probably easier to adapt for this.

Make sure you think hard about alignment. You are over constraining the movement. So it needs to be perfect, or it will bind.

If there is any sag, you will have more error than the LR3 rail.

If you do this, I would strongly suggest making it the stock way first. If you build this adaptation without building it stock and there is any problem, we won’t know where it is coming from.

Good point about the upcut. While Z is a thought, lateral support might be the motivating factor - especially for higher-Z cuts. Basically, transferring the force that occurs along the length of the gantry down the XZ plates to the rails, to a direct opposition at the ends of the gantry.

You might be right that I’m trying to solve a problem that doesn’t exist.