I was stuck on my Zen this weekend because I accidentally ordered the wrong filament, so I kind of wandered off to other things to do. On a whim I uploaded some logos/funny stuff to spreadshirt.com Today I got a mug in the mail (probably the only one that will ever get ordered, and I’m fine with that), and I got thinking… A nice T1 Engineering mug with the new logo on it would be pretty cool. Or funnys like “My other CNC is Mostly Printed too”. It doesn’t cost anything to put some stuff up there. It’s unlikely that anyone other that the company will be getting rich on this. But I think some of us MPCNC/Lowrider/Zen/Vicious1 fans/superfans would enjoy owning and displaying a little swag.
I’ll take a T1 Engineering mug with the logo and web address. Sound interesting to anybody else?
Ryan’s pretty busy, maybe we can submit artwork to him for his approval?
What do you think? Get a souvineer before Ryan has staff to answer his email?

I need to look at that, I have had a few sample shirts made none I was super excited about yet.

I have some I wanted with some sort of drawing, maybe a cad sketch of part of the machine, “Robots do my dirty work”, or “I built a robot to do my dirty work” , maybe? I just got the new biz cards in the mail, so I have been messing with a few things the usual 3D printed drink coasters, stickers…

But I am no good at that stuff, took pretty much 2 years to get biz cards.

What about a patent-like drawing of one of the parts or assemblies?

Something like this (but with the center assembly or something instead of a lego): Don’t you mean V(vicious)1? I am rocking the new logo on my comp book cover for school, that’s about it. Bout time I start seeing something new other than the standards like Hydroflask, Supreme, Adidas, Nike, Thrasher, etc.
I like the idea of some joke ones, maybe about an obvious error or failure we all get.
If for some reason I am ever so bored that I will die, the last thing I would do is make the worlds most massive MPCNC, maybe 6ft in every direction just to see how terrible it would be. All it would cost is some conduit

Maybe I need my own business’ logo swag…not yet.

Where is the merch store? Forget important R @ D it’s really about the merch!

An exploded view or technical drawing of the MPCNC gantry would be cool.

I like it Heffe, I always picture either a roller assembly or the center assembly. The center looks kinda like a crazy robot with the rails.

I have been a bit obsessed with the logo lately. I think the low step over zenxy pattern is 2.5hrs… 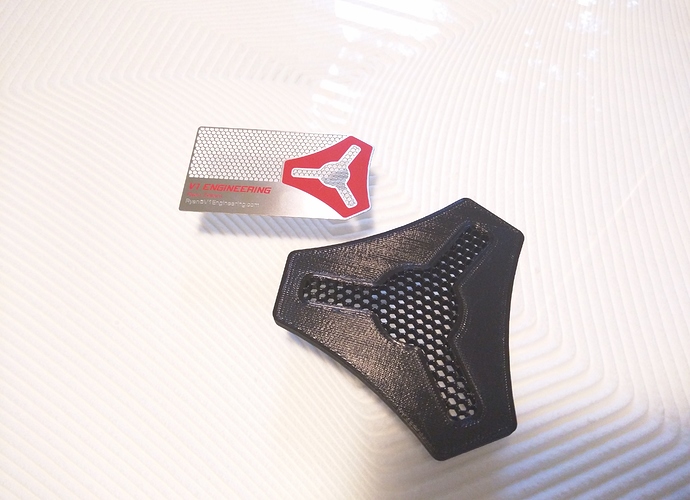 Those are SMOOTH. Dang it, now I have the urge to cut out an aluminum version. Is there a DXF somewhere? or PNG
Maybe a couple stickers here and there, I would put some on my rc car for sure.

Seeing that while eating breakfast is going to brainwash you.

Had to try out dual process so I printed the coaster…haven’t used it as a coaster yet.

Had to make a table because I have only had an outside table…haven’t eaten at it yet.

Had to get business cards…haven’t had a chance to give one out yet.

I love the logo tri-sided thing, but still needs text. So if anyone does have any ideas I am open, if not I think I will end up with whats on my cards.

Duh, V1, Where the heck did that T come from. Working from failing memori

I would say list the machines you designed, but there is 4, not to mention a couple you might have locked away where you keep your secret 11 herbs and spices.

Thanks! I do as well but it was stupid expensive…although I would do it again in a heartbeat, perfect .5mm touch plate as well.

Aww hell yeah, I don’t have a kid but if I did you better bet this is what he/she would be wearing.

This is ridiculous I am going to go broke. This is the easiest custom shop yet.

So far I have a hat on the way, still looking. Anyone can go in and change the color and size of the logo…cool. I have it set to mark things up $1, so it isn’t doing much but letting me have more logos…

Hmmm. That was fast. It has too much ink though, it will be really sweaty.

That is pretty freakin’ easy:

You can “edit” each design. Resize, and move it, change colors, add text. All I did was upload the SVG and it auto populated everything.