I googled on Amazon and found lots of affordable options.

Can’t you just drill some holes in the vacuum holder, glue 2 or 3 leds, and wire them to your powersupply?

Easy mod I would say.

Sure thing. One difference between that guy’s use of the ring light and anything like that that we would try, is he either has no dust shoe or if he does it’s not shown in the video as far as I can tell, while we do.

Our dust shoe is a two-part, with the slip on / slip off part being what finally forms the bottom of our equation. If we put lights on that with a wire, then the slip off part is now tethered to the unit by that wire.

I’m not so much interested in doing a mod like that myself. I just thought it was an interesting use of an automotive ring light and wanted to share that with the community here.

Why would one need the extra light near the collet? Just for looks? I guess I haven’t had issues seeing my bit and workpiece.

Why would one need the extra light near the collet? Just for looks?

Valid questions. I know some have opted for lighting underneath. I have not so far, but I lean toward trying it if I was not so busy on other things. For me it would be a mix of looks and also a bit better view of the cuts.

However, most of the light mods I have seen were on the gantry, not on the core.

I can imagine that having the CNC in a corner of the room / garage would cause some shadows on the item you’re willing to cut. So that seems like a good use case to me to add some light.

I haven’t finished my LR3 (parts are waiting in boxes for like 7 months now), so not sure on the exact location of leds, but my guess is that one would still be able to add some leds easily.

Myself I would be more interested in a cross hair (or how is it called?) So I could find the spot I want to start easily. On my LR2 that’s one of the things I spend time on quite often as I try to use as much as I can from a piece.

As a bit of feedback on the “culture” of this forum: Ideas can be in danger (it is ok to poke holes in ideas). But people need to be comfortable. If you’re going to criticize something someone shared (out of their own goodwill), it is important to keep the feedback positive (what about doing XYZ?) and nothing personal (“why would someone do X” is against the person, “What is the benefit of X?” Is against the idea).

Doug is very capable of handling criticism. I don’t need to stick up for him. But it is useful to set the record straight every once in a while. We don’t do much moderation here. People just mostly do the right thing and we all like hanging out here because of it. I’m not holding any grudges.

I think it is a great idea and a useful mod. Anything like setting up the zero, or investigating problems is a lot easier with more light. This much light would be abundant. Buying an easier premade led ring seems like an easy win to me.

Myself I would be more interested in a cross hair

As you may know, I did set up crosshairs (red “sight line” lasers) on my plasma LowRider 3. That was a bit easier to do placement because the machine torch (pencil torch) is narrow and vertically is a low profile to shine around. To model for a router based LowRider 3 would require the two perpendicular lasers line diodes to be mounted wider apart, lower down, and pointed more acutely sideways. It’s totally doable, and the diodes I used should be linked in my “LowRider 3 plasma on a budget” thread.

I may work up a model set for that!

I’m thinking a printed plastic yoke could be added onto my remix of the pen mount.

Here are pics of my crosshairs lasers working on my plasma build of LowRider 3: 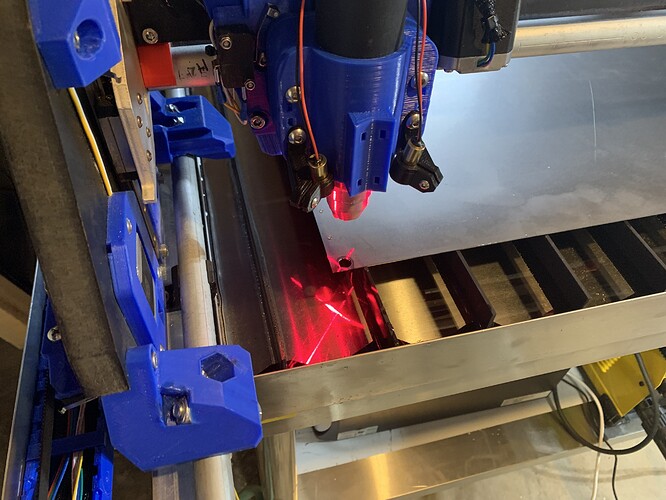 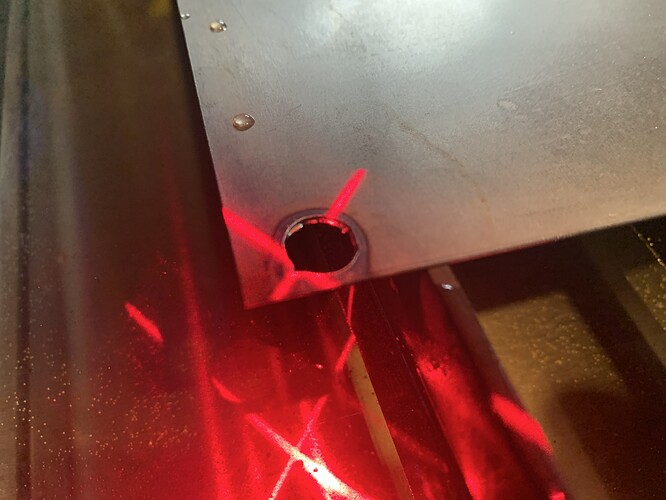 and nothing personal (“why would someone do X”

Your hint is definitely important, but as an English teacher I can tell you that often people don’t mean it like that if they are foreign speakers, they just have this sentence structure or way of saying it in their L1-language and it does not translate well. Not wanting to protect anyone, but just a reminder that not everybody is a native speaker and can express themselves precisely in the expected way.

Like the idea of more lighting on the bit, my overall space isn’t lit very well. Being honest though, given the time, for fun I do like building stuff that looks cool. Building stuff optimized for minimal time/material, and maximum profit would be different story though.

LOL, at home, most sentences directed at me seem to start with “why did you…”