For the complete cut, I did

and for the almost-cut, I did

IMO it still doesn’t look like you are focused at the surface of the cardboard. What are you measuring to get 16mm… from top of material to what? Also, put the windows on your shroud… always! The concentrated air-flow is crucial to clearing smoke and suppressing any flames. Something you might want to consider is eventually replacing the small fan that comes with the laser module with a higher-CFM fan… this provides a great deal more air-flow than the lower-CFM fan. Even without the fan upgrade, however, you still shouldn’t be having flame ups… but the shroud needs to be completely enclosed.

No measuring is required if you’ll use Ryan’s focus script… I’ve got it assigned to the #1 custom button in RH. I run it routinely just before I start a laser job and it never fails to work. The photos below shows the sequence… lower Z until the shroud is within a couple of millimeters (eyeball it!) of the material, run the focus script, adjust back down 18mm (2nd line is CLEARLY best focus), a few millimeters adjustment “north”, set zero (G92 X0 Y0 Z0), the engraving run (full power, 800 mm/min), and then the cutout run (full power, 80 mm/min). The through-cut is clean and not burnt on both sides… I tried 100 mm/min and it didn’t quite cut through on one side of the logo; i.e. I wanted it to fall out when I picked it up!

Used Inkscape and the JTech laser plugin for all gcode and RepetierHost to send it to Mega/RAMPS combo. 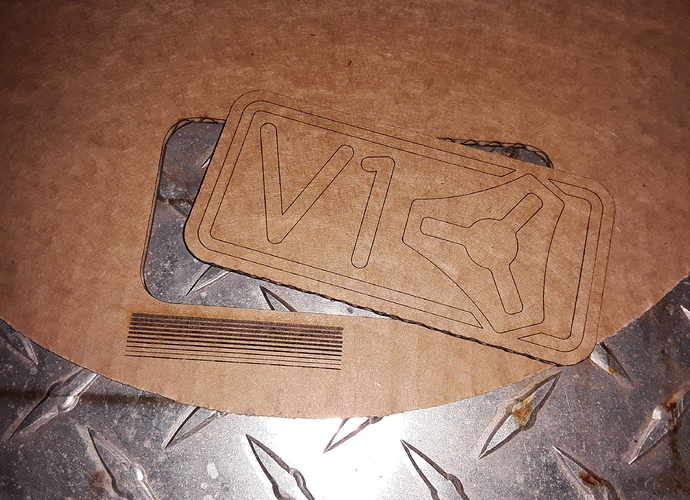 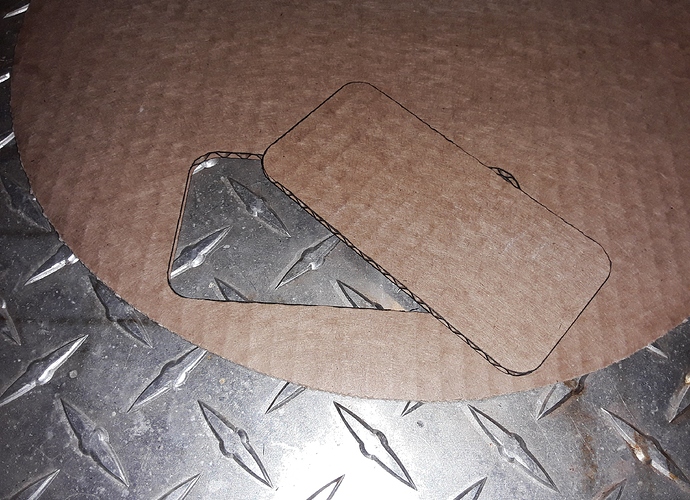 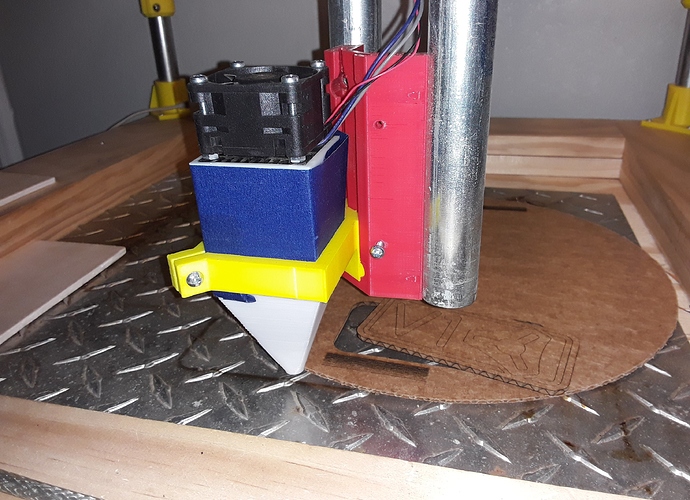 After that change didn’t give me great results, I popped off the windows and focused the bean by hand like you suggested.

Thanks again for all the advice and patience, David.

This is where I’m at now… I still have some burning when I go slow enough to cut through completely, and I really don’t have a super fine line from the focus script (but still thinner than the lines above and below). 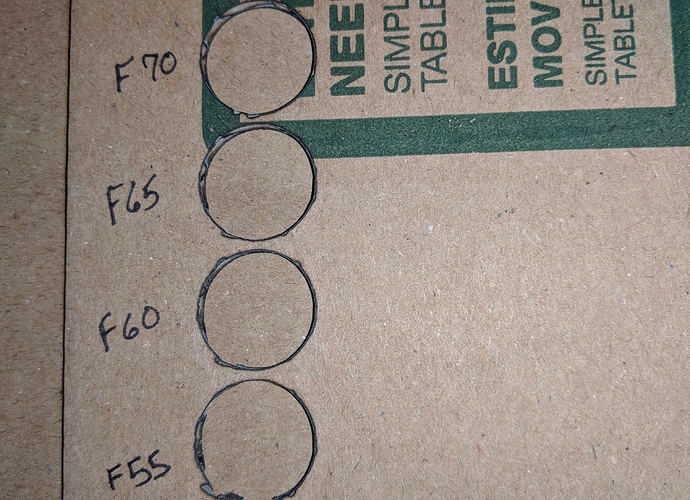 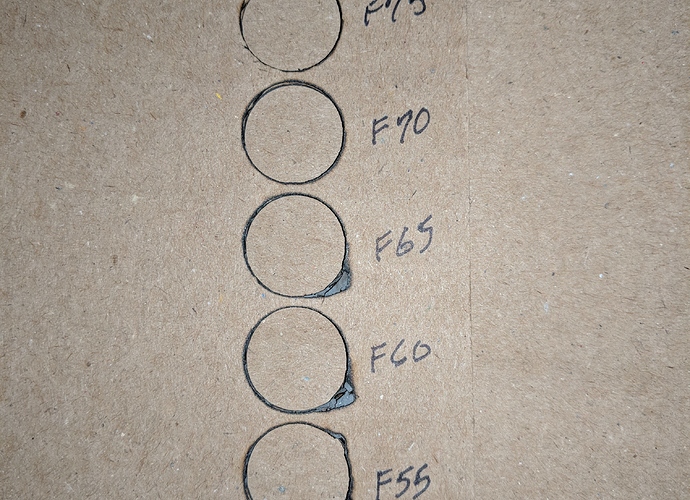 Here’s the entire video of the run I described in my previous post… no timelapse, no speed-up, just boring real-time…

More data... I connected the multimeter to the laser out on the driver.

This matches the recommended 1.5 amps for this particular diode (jtech 2.8w) 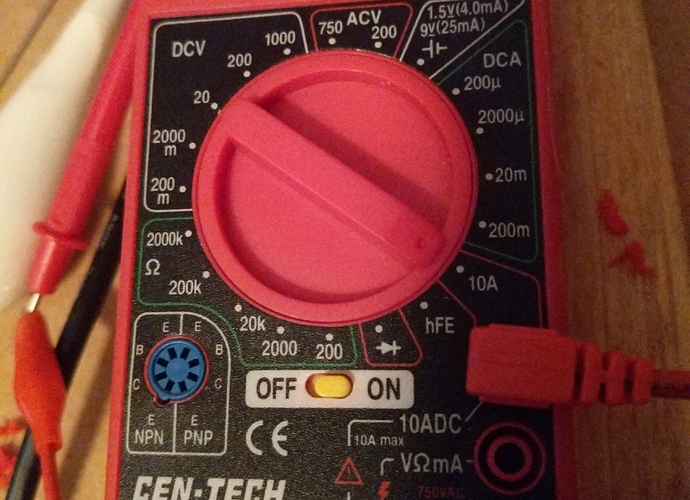 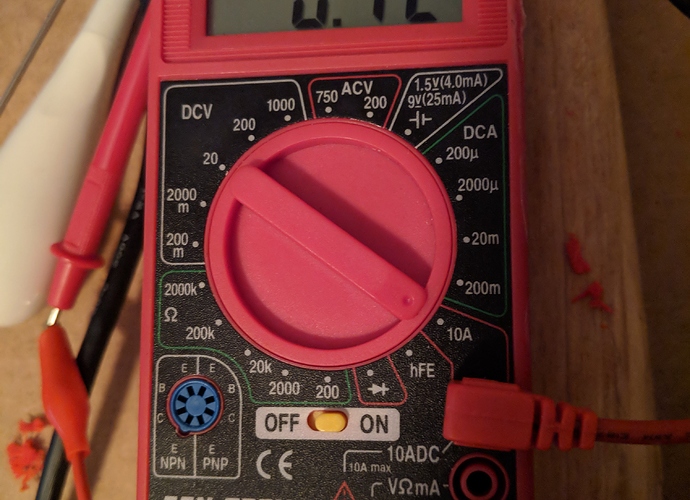 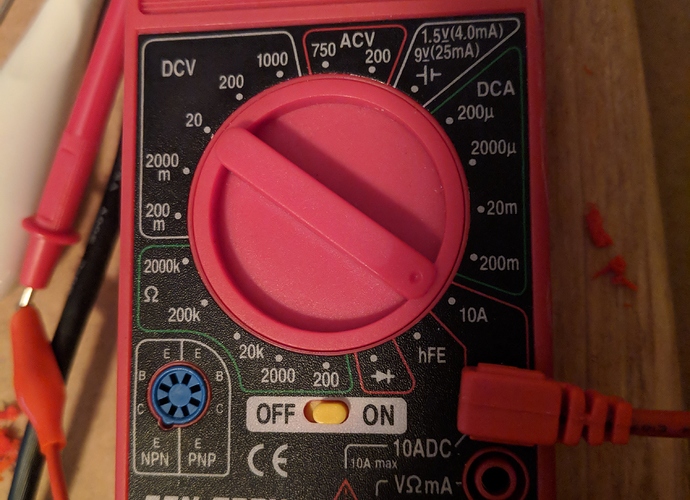 I emailed jTech customer support this morning. I’ll see what they recommend. Besides a beefier fan, I’ve tried everything you guys have suggested.

Did you point them to this thread, it might help. They jump in here occasionally.

I didn't think about it. Sorry

A little off topic, Ryan… What oscilloscope did you buy? Are you happy with it?

Ha, I have zero knowledge of scopes, like two follow these exact steps for class assignments. I am self taught (and Heffe tutored), so my opinion is not worth much. I bought this Rigol, knowing full well it is far beyond my understanding and needs. It seems to be a solid tool Pretty confident it will be the only one I will ever need. Pretty sure there is a cheaper two channel version that has the same specs.

I got a reply. As you all suggest at one point or another, I just need more air.

I think if you want to cut it in a single pass, you are going to need some sort of vacuum system or air assist. We use a new standard shop vacuum and put a charcoal filter pad around the inside. Don’t use one that already has sawdust in it because it is a fire hazard. We use this pad here:

Take out the inside and wrap up the filter that is in it and use some duct tape. It should be able to scrub the smoke now as well as prevent fire flare ups. If you do this, you will need to tape down the cardboard so it does not get sucked up. It is also good to make sure your cardboard is flat if you do big cutouts. If it is not, then you might need to slow down as the beam will get out of focus slightly on the raised areas and not cut as good.

You can also blow more air at the cut to avoid flare up. You can get an aquarium pump for cheap and direct the air to the cut area to reduce the flare up.

Your other option is to cut in two passes. It will depend somewhat on the cardboard on how fast you need to go, but we have found it will be somewhere around 200mm/min with two passes. I attached a picture showing our cut detail at this speed.

The good news is I think your results are up to par with expectations. Either add vacuum or air, or do two passes at a faster speed. 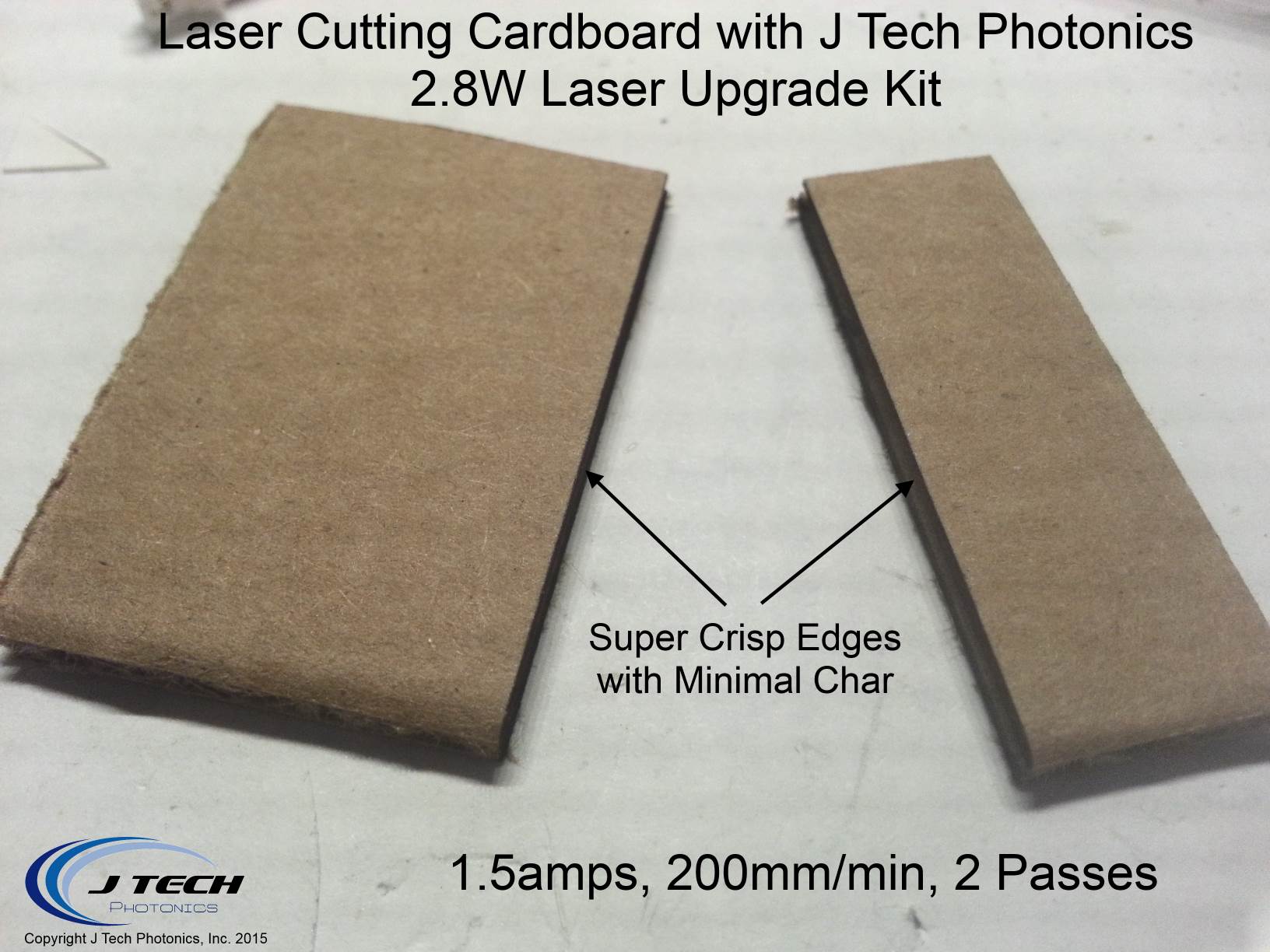 David - I like the idea of cutting on top of the steel sheet instead of burning up my spoil board - the MDF fumes!

Do you have to do anything special to avoid reflections back in to the laser? I’m not really sure how dangerous that is for me or the equipment.

Jason, “air-assist” is something I was alluding to when I suggested the higher-CFM fan. I’ve done the aquarium pump thing and found it to be minimal air-assist… better than nothing but hardly noticeable effect when cutting cardboard. I’ll invite you back to my thread to see the gyrations we went through testing this. Again, it’s spread over 4 pages or so, and mixed in with needle cutter stuff, but there is some really good information in there.

My little 3-gallon air compressor – with the regulator set as low as I could get it (5-10psi) – actually did reduce the number of passes in 4.75mm plywood from 5 to 4… using just a little printed slip-on inflation needle holder affixed to the tip of the shroud. Not only did it help suppress flames but you could also see it blowing tiny (not particularly threatening) embers out of the cut… which may be the primary reason the laser seemed more “efficient” with air assist. Unfortunately, this particular air-assist nozzle design is aimed in from the side and works best when the direction of feed is in line with the air-blast… and it’s so stinking loud, I’d rather cut the less “efficient” way. That’s why I’m now using the higher-CFM fan… it’s quite a bit louder than the small fan it came with but definitely puts out a stronger air-blast – not measured but surely more than the aquarium pump air-assist – and being concentric with the beam its effect should be similar in all directions. As true “air-assist”, the jury is still out, but I figure it can’t hurt.

Now, a word or two about safety… this is me, a 72 year-old, hard-headed, retired engineer speaking: I basically treat my laser like I do when working around a welder. I have laser glasses but rarely use them unless I really need to look at the spot and the immediate area around it. When not wearing them, I don’t directly stare at the beam (the shroud helps greatly as it’s only 6mm or so above the material and blocks direct viewing at most angles) and don’t worry too much about reflected energy… unless I should fire the laser directly into the bare aluminum diamond plate, which I don’t do. My feeling is that these diode lasers really need to be finely focused on the material to engrave or cut and any reflected energy from these lasers will be way out of focus at any appreciable distance and relatively harmless. [If these were collimated lasers (which I worked with in industry), it’s a whole different story… laser googles are mandatory at all times when those lasers are firing.] I DO NOT recommend this rather lax mentality to anyone… this is just me, and I just refuse to be real paranoid about it, at this late date. You are on your own when it comes to safely… just use good common sense.

Use a squirrel cage fan instead of a regular fan for the air assist. They work better in this situation.

@Barry - I don’t understand your suggestion. What difference does a squirrel cage vs. regular (by which I think you mean DC permanent magnet) motor have? I’d think that with a constant speed/load both would work the same with the permanent magnet one being slightly more efficient. Or are you suggesting a centrifugal vs. an axial fan?

Use a squirrel cage fan instead of a regular fan for the air assist. They work better in this situation.

Are you suggesting an additional squirrel cage fan near the tip, or to replace the diode cooling fan entirely?

A regular axial fan can’t really create pressure, the air will escape past the blades. Squirrel cage(centripetal) fans can create more pressure. You’ll still get leakage, but not as much. This helps with the laser since most folks have an enclosure from the diode to the target for the 40mm fans to blow through. What most folks find is you don’t really get much air flow because the exit hole is smaller than the fan diameter. So the centripetal fan can “pressurize” the enclosure, forcing a pretty good stream of air out the exit nozzle. It’s the same reason vacuum cleaners and dust collectors use centripetal fans.

With a 50mm 12v case fan, I did get better results on top. There was some burning on the bottom still.

I’ve got a squirrel cage fan that might work… Trying that next. 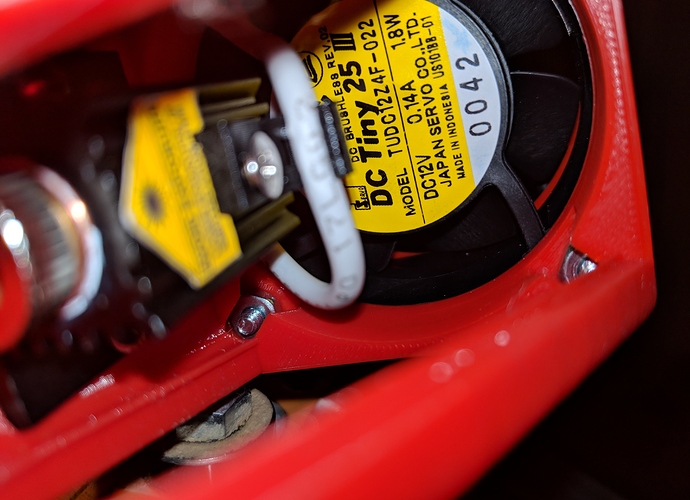 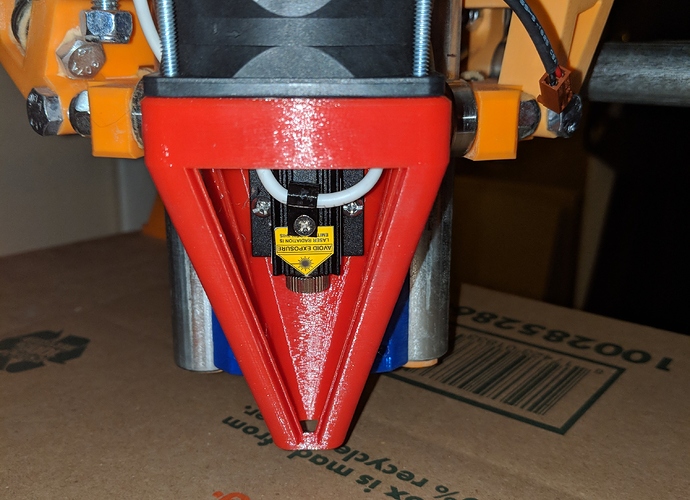 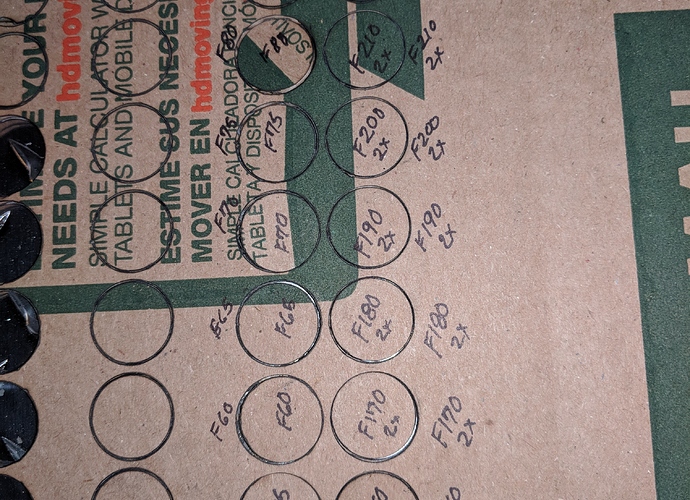 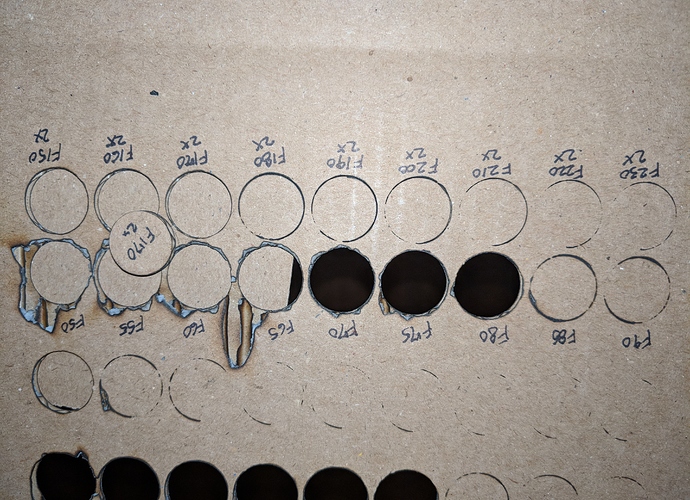