I’m just going to say it. PETG is much harder to print with than PLA. It’s so gummy, and sticks to the nozzle, and any over extrusion at all ends up collecting on the nozzle and falling off in big clumps.

I was printing something in PETG, because it’s the only white I had, and it was working ok. But I had a pretty high failure rate. The first layers were working about 1/3 of the time, and almost all of them ended up with brown blobs on them somewhere.

I just switched back to PLA and man! So much more forgiving!

I dreaded trying other filaments than PLA, hearing how difficult it’s to print with other types.

I eventually gave it a try, and I’ve had the opposite experience! After finding a good temperature spot, the prints are just as easy going as PLA, but they give off a much more sturdy impression. I’m using Fiberology easy-petg.

I need to try it again, it has been a while.

Happily using PetG. Built my MPCNC with it, made various replacements and additions to my 3dPrinter and a plethora of trinkets and life simplifying items. Found a consistency with Amazon PetG and SunE. There is a difference in the performance of different color tints to the filament.

I don’t like petg either, but I think it’s because of my nozzle. I tried switching to an all-metal hotend and never got it working consistently, so I switched back to the stock one. I couldn’t keep it from jamming up in the cold side of the nozzle

I have used way more PLA and really like it over any other polymer when it comes to printing. However, I think PETG has its use cases, especially when more toughness and temperature resistance is needed.

I don’t have much problems with printing PETG on my prusa MK3S, but it can stick a bit to well to the build plate sometimes if you don’t add something beforehand. I also feel like the PETG is more glossy and less good at hiding imperfections, but maybe that is just the colors and brands I have been using (Prusa filament).

PetG prints really good for me.

However i think i have some bad Petg: it is way more brittle than PLA for me.
i printed some MPCNC parts as replacement after my high temperature shed bend some PLA parts and the petG broke when tightening the bolts on some parts.

On other parts it isn’t nearly as strong as some people make it out to be. breaking in multiple tiny fragments on impact.

So i don’t get the hype either, if there was a pla variant with higher temperature resistance and an low price i would get that instead.

My MPCNC is printed from PETG from 80% and works fine, yes I broken some parts during tightening but maybe I applied too much force.

Using Prusa MK2S most difficult was nozzle height calibration ( it needs to be 0.08mm lower for PETG in comparsion with PLA). I’m using PETG for outdoor items without any issue.

Each filament is having some place in world.

A few things I have found for printing in PETG
Increase your initial layer height, you do not want to squish the first layer onto your build surface too much or you will have a heck of a time getting the print to come free once done. Also it can curl back and stick to the nozzle making a huge mess.

Use an all metal hotend for the higher temperature but decrease the retraction distance to help with clogs. If you still get oozing/strings play with your temperature, try decreasing it in 5* increments.

I print with both PLA and PETG equally, not on an MPCNC but on both a I3 clone and a large Corexy (I3 clone is direct drive mk8, corexy is 600mm bowden) I can say i like both of them for the ease of use and they seem to compliment each other. PLA is strong and fast to print with(50-100mm/s), PETG is tough, has a little bit of give and prints a little slower (40-60mm/s)

I’ll have to try it again in a year. I got really frustrated with it yesterday, and I have more than enough PLA. I like the high temperature PLA that’s around. I first tried makergeeks, and I liked it, then they went crazy, so I bought a (pretty pricey $50) roll from protopasta. It just prints to much easier. The prints feel nicer too, but I’m not sure why.

I was printing with makergeeks PETG, and it’s old, but recently opened. I was printing on a heated bed with blue tape on it. I was worried I would destroy my PEI, because I’ve heard it is almost a permanent bond. I was squishing it a bit to get it to stick, but maybe I should have gone farther away instead? IDK.

I use eSun PETG or http://www.zyltech.com/ PETG without any problems. It is a little stringy sometimes. The filament from zyltech is a bit less expensive & they quite often have discounts. They have a 15% off sale now. Their TPU is also less than a lot of places & I printed 4 tires for the Formula 1 car with that.

Think PETG prints the best with geared extruder and metal hotend. I haven’t attempted to print PETG on my MP3DP because the extruder isn’t geared. But on my heavily modified Ender3 pro, it actually prints better than PLA. Also printing on spring steel sheet with PEI. Cool down and prints comes off easy with destroying PEI.

Here’s some prints in PETG(Overture) with no stringing. Using nimble extruder, all metal swissmicro hotend and with a 5015 parts fan set at 30%. Printing at 80mm/s, 245c and 80c bed temp. If your having trouble drop the parts fan speed. 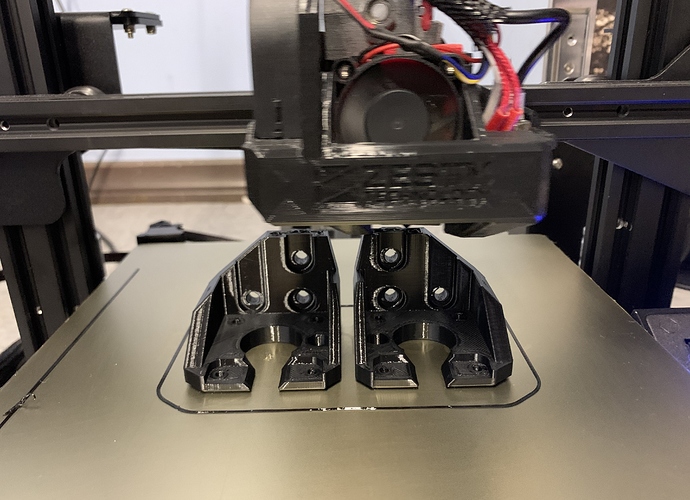 If I am using a 0.4 nozzle I usually start at 0.24 and adjust from there. Try slowing the first layer way down too if you find it curling or balling up.

PEI and PETG are pretty tough to separate lol. I use the anycubic ultra base on all of my printers (I think I have a problem lol :D) and it works amazingly well PLA or PETG sticks like crazy when hot and once cool the parts just slide off.