Guido comes to the rescue, but, is he flat enough?

So, after never quite getting my LR2 to be properly square, when the LR3 design became available, I jumped on it. One component that I wanted to keep was the 1" diameter X rails, as they were pretty good quality. The problem that I had was that in order to preserve their use, I was going to need a wider table… My LR2 table was 30" wide, but I had never cut off the rails so they were still 44" long.

Wanting to maximize the usable width of the LR3, I decided to fabricate it at the maximum width for the 44" rails, which meant that the table top needs to be about 49" wide, more or less.

While I have been completing other details, I’ve been thinking about how to come up with this wider tabletop in the simplest possible way. Enter “Guido”.

Guido was found on Craigslist ($35) and is a 1.5" thick table top that is 63" x 49.5". His name came from his previous life as a table in a local restaurant that was big enough to seat the entire family. Hence, the name “Guido”.

My problem is that Guido has a slight crown across the x-axis. It’s about 1/8" center to edge. So, my question is how critical this is. I’m currently thinking that adding a spoilboard and then flattening that using the LR3 itself might be the easiest solution. Of course, if the LR3 runs on the table top, then I’d lose the thickness of the spoilboard in height capability. Or, I could add some spacers for the LR3 to run on top of with the spoilboard between the two spaces, which would eliminate some or all of the height loss.

I’ve tried to pull out the crown of the table top, but that doesn’t see like it’s going to work.

Is there a preferred way to tackle this?
Thanks. 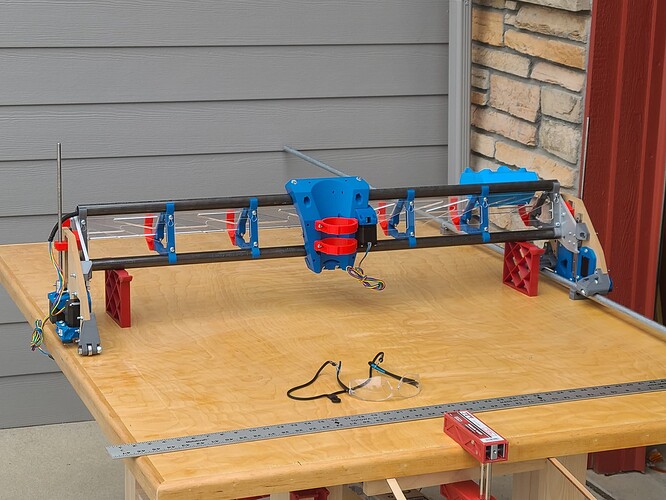 The crown depends on what you do. I typically do through cuts and if I have any Z pockets the depth is rarely critical. So I would not even worry about it.

If you have Z critical projects, cover the entire surface and do a very light surface to get rid of most of it, but not deep enough to dig a pocket.

It is also rare to do an entire table sized project, with critical Z heights (a v carve wouldn’t ne full sized). So I would agree. Put a spoilboard on it and ignore it until you have a job where it will matter.

Your Z isn’t perfectly straight either. The sag adds a similar issue to every build (even non guidos). It is just one consideration. Cutting an extra 1/8" into the board (and that is only full width projects) is not a big deal.

Why not use a 1/2 " substrate under the spoil board and surface that flat then put a spoil board on top. The real spoil board would only require a tiny skim off the top.

Put a spoilboard on it and ignore it until you have a job where it will matter.

If you have Z critical projects, cover the entire surface and do a very light surface to get rid of most of it,

Thanks for your comments, guys. As you point out, this is probably an “if it ain’t broke, don’t fix it” situation. It’s time to proceed with getting the LR3 operational. It’s been in the current state for several weeks (not entirely because of the table).