Hi Jamie. Grblgru seems to have corrected his false positive issue with the latest Beta. Turns out he was trying to make the installer more user friendly and in doing so annoyed at least my antivirus program. I’ve scanned his last 2 Betas and they are fine. That was the difference between ver 3.38 which you found to be ‘clean’ and the later ones. If you find there is still a problem with your scanner, please let me know

Meanwhile, there both working MPCNC and Lowrider models available that move properly in the latest beta 3.41.9.

I have continued to figure out parts of the program that didn’t seem to be working for me and getting them working. Just lack of familiarity with his program I guess. Soon I will be creating round objects like bowls, scanning/probing them, saving the scan data, exporting that to my CAM software for design, and finally cutting the designs on the object in the real world with Grblgru and my 4th axis. I’m nearly there with all the steps.

I also figured out how to build a useful 5th axis for my purposes so then I’ll have to figure out how to use that too. Lol

Cool I will check out the latest. Also I will try importing custom mpcnc models again (not quite working in 3.41.6) and if it works I’ll make parametric mpcnc STLs via Thingiverse…

Grblgru has also made it possible to move the 4th axis around on the base by manipulating the position coordinates under Machine Manager. This also applies to the location of the Probe. You can change the direction the 4th axis is pointing with a 0 or 1 at the appropriate direction line.

I’ve managed to import mpcnc models. It turns out the A+ axis is mandatory and if the STL is missing then it doesn’t work correctly. This probably ought to be fixed because the majority don’t have a 4th axis.

I’ve updated my model on Thingiverse to be parametric, but the Thingiverse site is acting up so I don’t know if it will actually work. I can barely get preview and download to work, so I’m not too hopeful that the customizer will work.

Is it just me, or has TV’s reliability gone down hill?

Is it just me, or has TV’s reliability gone down hill?

Yep. Think they need to upgrade.

I’ll get a plain XYZ MPCNC design together and ask Grblgru to include it. I need a Lowrider model with a fourth axis as well so I’ll make a model for that too.

I asked him before about a variable design and he figured it was simpler to just make one for each machine type and better yet if the user could just make their own.

Having a customizable design on Thingiverse would be great for all concerned.

Hi again. Grblgru has now updated his software in the latest beta 3.42.1 to have both MPCNC and LowRider with and without a 4th Axis. The other good news is he has made the machine XY sizes adjustable Woo Hoo! Jamie can save himself some effort. The adjustments can be made under Extras, Machine Manager. Scroll down to A. Others, and adjust Extension X and Extension Y with positive or negative numbers to get the size base you want. Very slick. He hasn’t made the support rails height adjustable but I didn’t ask about that. As Ryan has mentioned in the past, better to go a little down than up to keep accuracy in the Z which is partly why I made a hole in my table.

I am experimenting with post processors for VCarve Desktop to see which one works best for Grblgru. He tells me there are some tricks. So if I learn something useful I will report on that.

I’ve made great progress with Grblgru running my Lowrider with a DIY 4th axis and carving on bowls. Grblgru is hard on my heels I think since he wants to do 4th axis stuff too as well as some 5th axis stuff. I know how I want to build a 5th axis but I have no clue how to incorporate it into what I want to do, lol.

I had to modify a VCarve Post Processor for GRBL so GRBL Mega 5X would be able to do what I want it to do: Y to A rotary, arcs and Laser.

I’ll attach a pic of my latest success 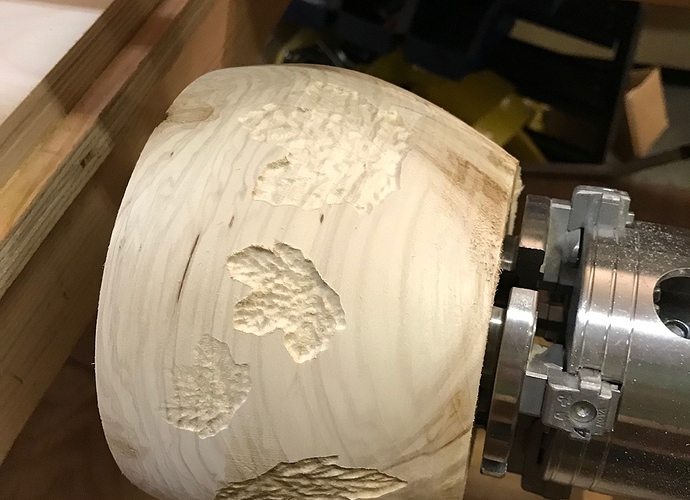 Whoa! Mind blown! Did you start with a round blank or di the cnc also carve the curves?

What 4th axis is this? Did you post about your machine in "your builds? I want to know more :D.

@vicious1 definitely needs to add that to the gallery. Post a pic of the finished one too please.

Thanks. I started with a bowl I had already turned as a test piece. It’s aspen which isn’t the greatest for milling since it’s so soft so some detail is lost. I’ll try one today with birch which is better. I could have done the entire outside from a round blank with a few roughing passes but it is Much quicker to turn these on a proper wood Lathe.

This could have been done with Mach3 but I wanted to get Grbl into the act for a variety of reasons: free software, widely available, inexpensive components, etc. Grblgru is on board with that.

My 4th axis is simply a Nema23 directly driving a standard scroll chuck right off my Lathe. I drilled a 1” x 8tpi bolt for an 8mm shaft, tack welded it, ran it through a couple of skateboard bearings set in plywood. I had planned just to do a finish pass on the pieces I use so with a small step over and a 1/8” ball nose bit I don’t need much holding power in the axis. If I find there are problems I can always find a metal geared 4th axis. I was milling inadvertently as deep as 6mm or so with that bit and it was pretty good so a 3 mm pass was no problem. I was already thinking of a 5th axis when I made it so the chuck angle is adjustable. I’ll attach a picture of it.

On my MPCNC I plan to use a small geared Nema17 direct drive 4th axis similarly made. 5.18 to 1 gearing. I can easily run that off a RAMPS board and Dvr8825 driver. 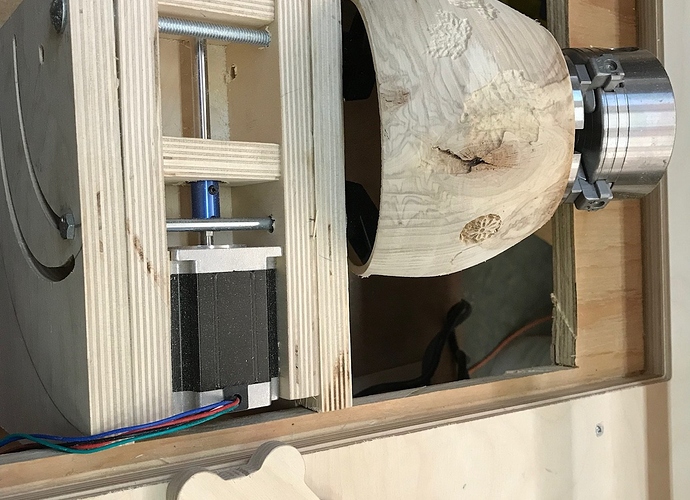 Ryan might be pleased to know that Grblgru has posted a new video to YouTube titled ‘Grblgru How to use Advanced GCode’.

The first part of the video features the MPCNC with a 4th axis (running with GRBL Mega 5X on an Arduino Mega 2560 with a RAMPS card).

Both the Lowrider and MPCNC are available in his program as simulations as well as many others. They are modeled with and without a 4th axis.

You don’t need a machine to use them either. Grblgru can be used as a purely virtual program, or GCode generator, GCode sender, and machine controller. He continues to refine his features particularly for the use of a 4th axis. All for free. There are still some great deals out there in the wide world.

Do you have a link to the video?

You can find the video at:

That is awesome. I need to add this to the control page.

Hi Ryan. Grblgru has posted a new video detailing the use of a 4th axis on his Youtube site:

He shows how to measure a form like a bowl, make an STL, project a DXF or SVG onto the STL. That will generate the appropriate GCode to run a machine controlled with an Arduino Mega + Grbl Mega as discussed above. The importance of this is that 2D images can be used as design elements to be put on a 3D form. This will be especially useful for Laser work because his software will follow both curves - around the circumference and up the side. Diode Lasers as you know have a very short focal length and this ability to follow the curves allows the laser to stay at a fixed distance from the form surface and maintain focus. Router work is easy as well. Depth can be specified in the Job setup.

Both the MPCNC and LowRider feature in his pictures of machines with a 4th axis. I have previously posted pictures of my machines on this site with a hole in the work surface to get to a 4th axis rather than building out on one end. I think it keeps my machines more rigid doing it that way.

I have made very simple Z Axis probes to accomplish the surface scan as well as used the aluminum tape strip on the surface and tool tip method. The scan resolution can be adjusted up from 1mm, or made at something like 5 mm with 1mm or more interpolation.

The images I’ve attached show a simple maple leaf design mapped to a sinusoidal curve and projected onto the side of a small bowl. The pattern wraps entirely around the form. Have fun. 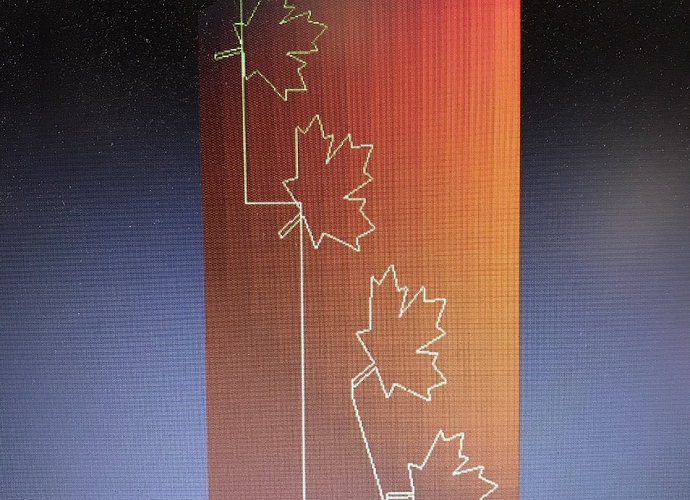 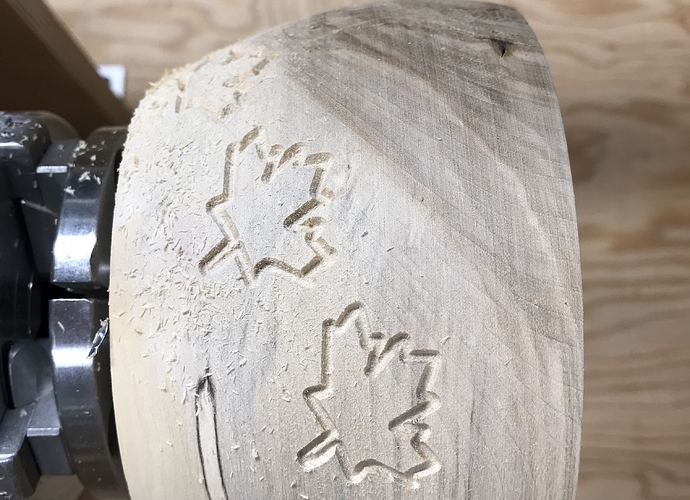 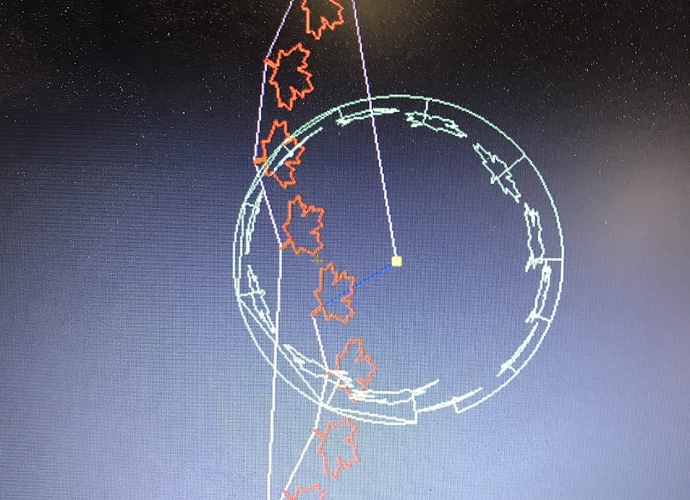