LowRider3 Build completed - its time to be cracking on an arcade cabinet so I can get the nostalgia cranking! Plans are designed (original not by me, but modified by me to fit the bits I have)… 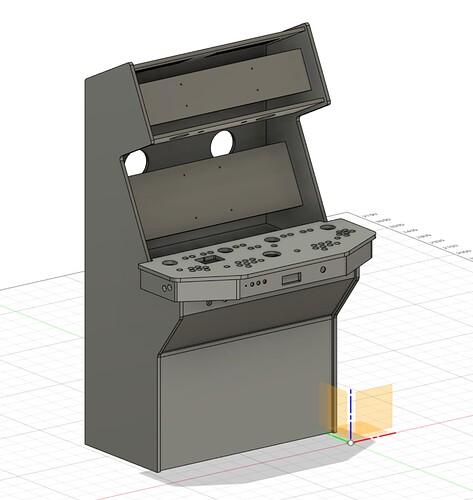 Next step will be purchasing 3-4 sheets of 18mm MDF so we can get cutting. This will be my first major woodworking project, so really keen to get stuck in and make some mistakes! I’ll be posting the journey as I go with the aim of having “something” by the end of the year - so need to get moving!

Art will be - Transformers (yep, not Arcadey - but kids and wife love the franchise - so why not!) Some initial drafts for the side.

The journey begins, have fun

Awesome! Decided on electronics yet? What are the larger holes on the top for each player for? Spinners?

Very awesome!!!
I have a old rayden cab I fixed and modified. So much fun the old arcades are it’s funny seeing kids try and play. Some kids have never even played a joystick these days.
I have a cool spinner steering wheel I did for iron heart 4x4. Still in testing stage but seems to work. It uses a optical mouse.

haha thats super cool. Yeah tbh I’m pretty average at the joystick too - arcades were viewed as a money pit by my parents so we rarely went haha.

I am not surprised to see so many in to retro gaming around these parts. DDR?! OMG… you all are going to make me shed more tears over the wii console and ddr pad collecting dust since the console let out the magic smoke. Anyhow, just to be sure you know how much I will appreciate your progress on this… I actually run an image of retropie on the pi4 that is a permanent part of my primo electronics.

I made some 2-player fighting controllers and one with a stick/spinner combo for some games. The spinner drops right in to a Happ stick slot, and uses USB mouse parts (let me know if you want STLs for that). I’m sure you already know your LR3 is like the perfect tool for making arcade cabinets. I would not be surprised if you end up being asked to make more after friends and family get to play with it.

Nice project !!
I’ve made 3 bartop(2 players) already for familly and friends, really nice and enjoyable moments doing it and using it !
You might have another look at the buttons of the 3rd player, they seem to be too much far away from the joystick hole and too close of the 4th player’s jostick.
Also, i don’t really get why all players don’t get the same controller button number and layout.
I suppose it’s for more advanced 2 players only games with 8 buttons for the 2nd and 3rd player position, but i don’t understand why the 4th player don’t have same classical 6 button layout than the 1st one ?

I have a skinny cab and I wanted to retain the original design so I kinda built ontop of it. And I use it as my portable workstation.
It still have the original tube in it and the game board. But it was only two button and I wanted to play other games. So I made a epoxy extension, then a fold down extension on that that’s where I mounted the one spinner wheel (no stops just freewheels) and a little foot pedal for on the floor.
It’s kinda fugly but just posting to possibly brain seed you.
Going to add a couple things today onto it I think. Like projector for a second screen and maybe a little mount for the kids Nintendo switch thing. 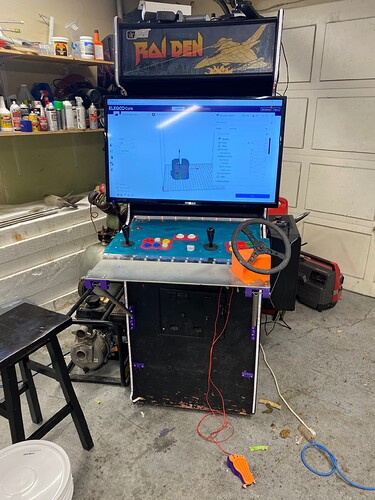 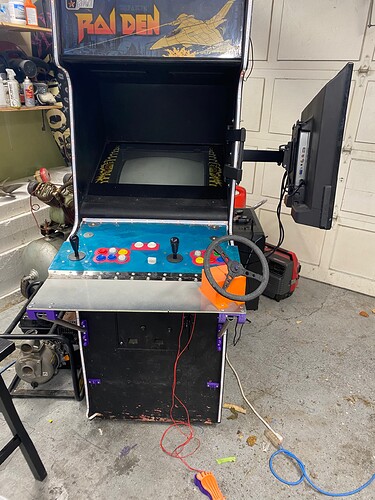 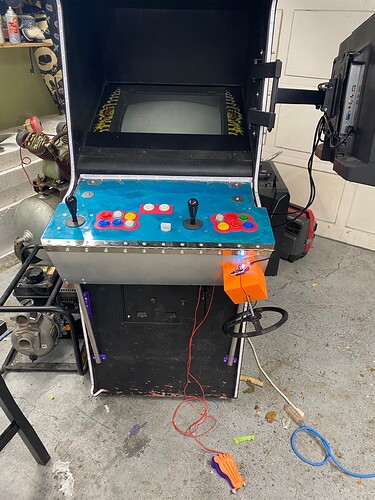 image1920×2560 504 KB
Also don’t judge me on the shop mess Lol.
Please keep us posted on your build. I wanted to get big buck hunter and Area 51 going and I think I got scammed on my IR sensors I was going to use to build the guns

A neat thing that worked was it has led’s literally all over and it’s has a microphone so I put that under the joysticks. So when you press a button the lights either change or blink.
3 Likes
wccrawford (William Crawford) November 20, 2022, 4:33pm #10

Are the original or modified plans available anywhere? That looks pretty much exactly like I’ve been looking for.

I love the idea of doing work on an arcade. It is either terrible dark (doing work on a fun machine) or delightful (making your work setup more fun). I think I would have a hard time not just jumping right into the arcade game though.

Also don’t judge me on the shop mess Lol.

OK fine, but I will judge you on covering up that glorious CRT up with an HD monitor.

Love the fold up wheel and “foot” pedal… the Super Sprint series is one of my favorites… something like that could do a pair of wheels without being a one trick pony.

I think I got scammed on my IR sensors

That sucks. I heard it isn’t easy to get that working DIY. My plan is to get a pair of Shinden’s with recoil. The price is heavy compared to the norm for retro gaming gear, but they are really nicely built, and there’s something to be said with taking it out of the box and just playing.

Yeah maybe one day I will get the proper guns. It would be so fun. The ir sensor burn kinda made that decision it seems haha.
Those crt’s are a lot of fun I had to dial this one in quite a bit. Big time danger too.

It would be funny to use joystick for cad movements. I really had no where else to hang the screen easily when the wife made me take it out of the kitchen

I read a review of the Sinden gun where the guy tried using it as a mouse… now I’m imagining using it to draw in CAD.

Yeah man. I’ve gone with pretty much all Ultimarc stuff. The box and cabinet is designed by DanielSpies on YouTube and so I am getting similar hardware to what is on this video: World's Most Expensive Arcade Cabinet Upgrade -Part1- "Hyperspin Mister FPGA Setup" - YouTube

The cabinet is a similar design also.

So on the top, the large holes are for drink holders - yay.

We have the 4 player controllers with less buttons for the 3/4 players as we decided it wasnt necessary for them to have a full set of 8 keys. We have a spinner, a roller ball thingy (cant think of the name) which is from Ultimarc also and a streamdeck. Will be resembling this layout: 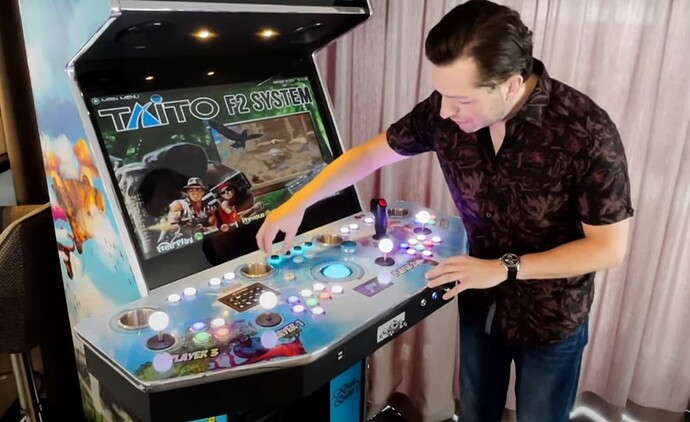 lol. Ive had my fair share of magic smoke. I actually had a pair of metal DDR pads a few decades ago (the unbranded ones off eBay) and they did good, but did leave them unused for a good 5+ years and yeah on set up again they were no longer working. At that time I wasnt into electronics etc so ended up selling them off for cheap.

I’ve seen a few plans around for DDR setups, so hopefully I cant find one that is suitable to my nooby level of skillz.

Not publicly available unfortunately as I had them designed/commissioned by DanielSpies. You can contact him on these details though if you wanted to find out more: Super cool man. You are well ahead of me at this stage haha. Will post some progress pics in the coming week.