I’m know I’m calling that wrong but I cannot come up with the right term right this min. Anyways. I’m trying to build a box. The end edges of 2 sides are cut down to over lap the other sides. I did them as a hole in estlcam and then cut outside of that as a part at full depth. It’s leaving a ridge as you can see in the pic. What setting can I change to fix that? In the next few days I plan to build a lot of drawers for my LR3 table and I would hate to have that end up on every part I cut. Thank you for any help!!!

Estlcam doesn’t do rabbet joints very well. You can fudge it a bit with the drawing, and some manual pathing though. Dado joints can also suffer from this.

Some of this is actually best not done with the CNC, and is easier to do with other tools.

Not sure what you are considering a ridge. Some of that is tearing from the upcut bit. I see a lot of that, can’t make.put much detail in the corners though.

If you cut a pocket that goes to the outside edge, Estlcam will leave a little corner where the bit doesn’t reach inside, or rather the tool will because it’s round. This includes the outside corner of a rabbet joint. Usually this can be easily cleaned up with a chisel or even a knife.

Or you can “overcut” the corner. This will leave a little divot on the inside. Generally this is small enough not to be noticeable, on a small bit like a 1/8" it’s very small, but will allow the corner of the material not to interfere.

For the ragged tear edge, if that’s what you’re speaking of, go slower, use a finishing cut and if that isn’t enough, consider a downcut bit.

The rough edge was from the upcut bit and i hadn’t sanded it yet. What i was talking about was the ends. It should have all been cut down but instead it left a ridge around it. I was able to cut it all down with a knife. I was just curious if there was another way i should be going about it in Estlcam to not have to do that.

It should have cleared everything. If you really want to be 100% sure, create another layer with only those pockets and let them overlap on the edges.

create another layer with only those pockets and let them overlap on the edges.

How do i make it overlap? I’m cutting the first drawer out just to see how it goes, On the Dato’s where they go all the way to the edge i manually did it and had it go farther. Only cut one so far but it seemed to do good that way

How do i make it overlap?

Create a bigger pocket in your DXF. Estlcam can’t really do it.

Create a bigger pocket in your DXF

I really like Estlcam for most things. But that being said…Is there a better Cam software for doing stuff like cabinets? I see all kinds of youtubers cut all of their cabinets out on CNC. I know i can do it on the table saw/ Track saw. But i spent all this time and money making this LR3 that can cut full sheet. Would sure be nice to let it do the work lol

You can use the manual to in estlcam for overcuts. You click somewhere on the edge, and then it will try to trace the edge (with a green path, IIRC). If you like the green, you can right click to use that. But when you get to where you want to overcut, you can click off of the path.

My guess is that if you measure things you’ll find that your your outside cuts (part width/length) are a bit big and your inside cuts (e.g. rabbet) are a bit small because your bit diameter is smaller than advertised (not uncommon). With both inside and outside cuts the error is doubled resulting in that standing bit of leftover. Even with dialed in bit diameters the results won’t be ideal. 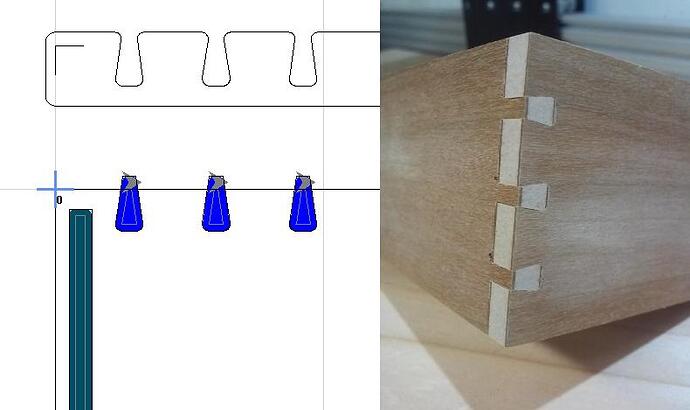