(Fellow forum members: I seek your help with filling in blanks and adding additional devices & info.)

I’m just gathering information both for myself and others.

In my considerations/preparations for building a CoreXY printer, which is quite likely to be one of the latest MP3DP designs by V1…

I have been researching what extruder and hotend to get (or to use from my stash). I’m seeing how the Max Flow Rate of a hotend (in mm³/s) can be compared to the Flow Rate (FR) of one’s desired printing plan, using the printing formula below:

I am also attempting to document what is the Max Flow Rate (MFR) of various hotends I either possess or have some interest in.

Speaking of which, there is a fabulous calculator tool at 3dpassion.com/nova that instantly feeds back the correlation between nozzle diameter, layer height, flow rate (mm³/s), filament diameter, extruder speed, and printing speed (mm/s). 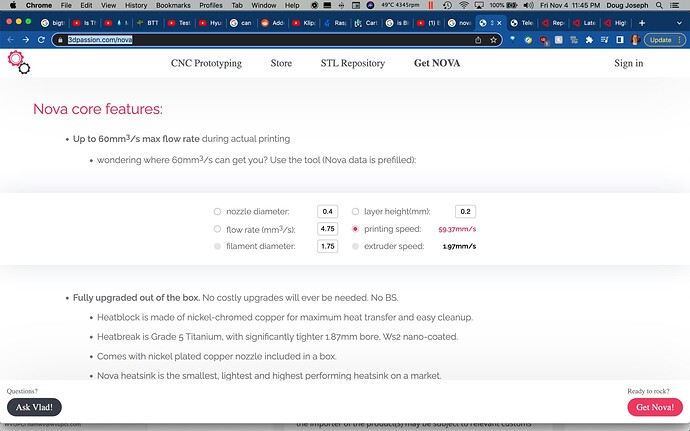 I own several BIQU B1’s. I searched for a published MFR for its stock hotend / extruder combo, but did not find it. However, I found the following published info:

Then, by use of the Nova calculator, I deduced a decently reasonable estimate of the Normal Flow Rate and Max Flow Rate of a BIQU B1 printer based on its printing speeds — assuming 0.4mm nozzle and 0.2mm layer height. See data table above.

Also, quite some time back I bought a BIQU H2 extruder/hotend combo. I was curious to see how much better, if any, its MFR is compared to the B1. Generally, I’ve been very impressed with the B1’s and I have been able to push fairly substantial amounts of filament through their stock heads and boosted print speeds. Still, for the then-pricey purchase of the H2 (~$100 then, currently on sale ~$64 or so, for the whole “pre Black Friday” whatever) I had the “impression” the MFR of the H2 would be better. Based on my research, apparently not by much. I found a published “Extrusion Volume” for the H2 of “600mm/min” — BUT NOTE: that’s per minute, not per second! That works out to only 10 mm³/s — either right at, or barely above, the MFR of 9.6 mm³/s of the stock B1! See data table above for comparison.

I have a Micro Swiss direct drive extruder hotend combo, which is a “drop-in” replacement for an Ender 3 stock setup. I cannot find published specs, but my sense is: 1) it is better than the stock Creality setup, 2) I could not say how much better. I say all this as I used it to replace the stock Creality stuff on an Ender 3 v2.

“The maximum print speed for the Ender 3s is 200 mm/s, according to the manufacturer. However, that’s much faster than most users would be able to run it. In fact, this is usually the speed of a travel move rather than a print move.”

Anyone have other info to add?

If your stock Creality extruder is holding you back I’d highly recommend a BMG clone from TriangeLab.

Anyways, with a good extruder and the only limiting factor being the hotend you could expect to get around:

~14-16mm3/s for a SF Dragon, DragonFly and a little bit higher on a SF Mosquito

No one has done a real comparison of every hotend and what they’re actually capable of for max flowrates so take these values all with a grain of salt. It would be really interesting to see a database of each hotend at different temperatures and using different filaments, seems like something CNCKitchen would tackle but it would probably end up pretty similar to the values above.

The speed benchy runs gave a fairly good picture of what can be expected of the SF/HF variants and Volcano/Nova. It can vary a lot depending on what filament, temperature, and nozzle size you run at. Using 0.4mm nozzle at 0.2mm layer height and <150mm/s print speeds you should be fine with either a V6 or any of the SF variants. The HF variants should be able to push upwards of 300mm/s on a 0.4mm nozzle at 0.2mm layer height.

Everything else (Supervolcano and Mosquito Magnum+) is completely overkill for a homegamer IMO. Unless you really want to play with huge nozzles (like 1mm+) you don’t need anything higher flow than the Volcano. Even if you do want to use huge nozzles you’re gonna run into massive cooling issues if you run at the max of any of the really high flow models. Using a 1.2mm nozzle at 0.6mm layer height and 120mm/s would be 86mm3/s. That’s way faster than you should be printing on a nozzle that size unless you have a HUGE printer, you’re not going to be able to cool fast enough.

Personally I’d avoid both really high flow hotends. The SuperVolcano heatbreak will bend/break in the lightest of breezes. This means you can’t run at high speeds/accelerations as just the momentum of the heater block can bend/break the heatbreak. The Mosquito Magnum+ shouldn’t be used in any printer with a plastic mount or V-Wheels according to Slice, this removes pretty much every non-industrial printer from the compatibility list. On top of that the dual heater cartridges of the Mosquito Magnum+ make it a lot less safe to wire and run, again especially for homegamers.