A friend just had a baby, named him Jonah, and found out he has a somewhat serious and super rare disease. Doing fine so far but a bit touch and go; made this to hopefully provide some comfort/catharsis. 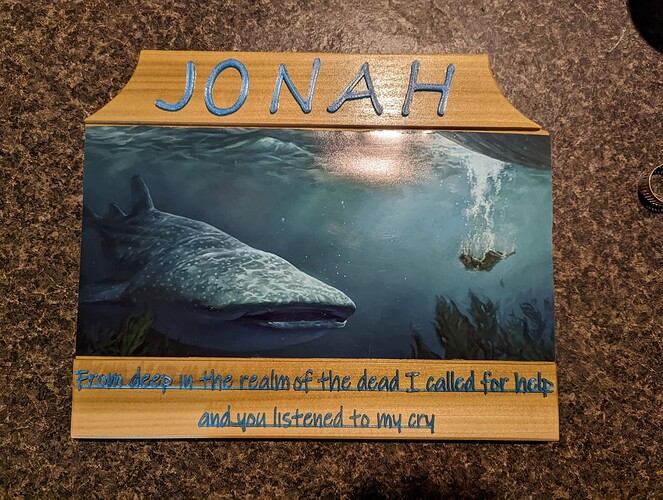 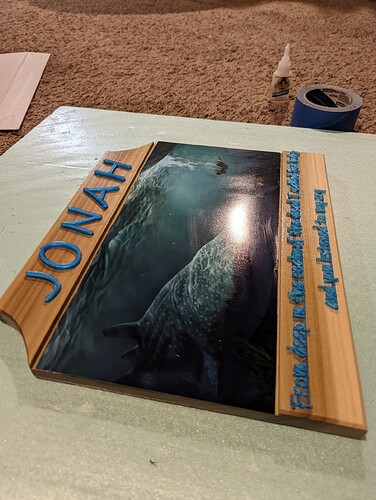 It was more nerve racking than it should have been though. Tried doing a chamfer using a 3d model in ESTlcam and tried it in foam. Ramped it up to 300% speed and the X axis kept on skipping (no, it was not the grub screws, I checked) in a certain area. Seemed weird but thought maybe it was a connection. Removed all of the wire protecting sheathing, pushed real hard on the connections, and tried it again. IT WAS WORSE!! It couldn’t even move an inch without skipping now. But hey, if you take an action and it results in change, even a worse one; at least you know where the variable is. Stripped the wire and soldered it together instead and that solved that issue. 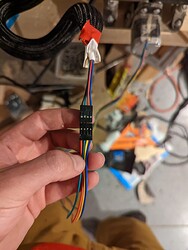 3d printed text kept on getting globs and not looking as good as it could. Took me about 6 prints to actually watch the preview function in cura to see it was printing tiny inner walls first and then the outer perimeters. The tiny inner walls weren’t sticking well and moving around. Switched that to outer perimeters first and finally got good text.

Finally, went to carve out the pocket for the poster image with the most trepidation I’ve had yet. And the router stopped working half way through

. Not bogging down, no skipping steps, the dewalt 611 just stopped rotating. After a panicked “stop print” turn off the router, and pull it from the base (stop print takes forever to actually stop if you’re doing straight lines), I was able to trouble shoot. Took its top off, saw lots of wood dust in the electronics and brush springs so cleaned that all out. Put it back together and voila, running router again.

Yesh, more effort than it should have been but I’m pretty happy with the results!

You are a good friend, you could have stopped at anytime but you persevered. I am sure that will bring your friend a much-needed smile every time they see it.

I read “yesh” and wondered if this project set you to drinking!

Nice piece though. It sucks a lot at first to see the things people make and struggle to get through something you think should be easy, but remember…most of us have had exactly the same types of struggles. You troubleshot, you solved, you finished. Most importantly, you polished skills. Sooner than you think you’ll be ripping jobs out in less time than you could have thought while you were in the middle of this one. Good job.

I think your friend is going to love this.

Oh yeah… dewalt brush issues. My 660 has cut out a few times as the brushes don’t slide well with wear, even though the springs are good. Not from dust build up. Now i listen for the all too familiar sound when motor starts to slow down and see the noticeable sparks in the housing. Thankfully it does not happen often, but it is better to stop then drag the no longer spinning cutter across the material and break it.

Beautiful job! Looks great. I have a relative going through a similar situation.

Nice to know I’m not the only one lol Definitely going to be more wary about the router.

I read “yesh” and wondered if this project set you to drinking!