After living with Arrakis for a while I decided there were a few things I didn’t like about it. We’re going to have a MakerFaire in Milwaukee next weekend, so I have been busy making changes to Arrakis and trying to get them done by Friday.

One big problem with Arrakis was the bottom of the sandbox was made from 1/4" plywood. I found it would warp with changes in humidity and the magnet would occasionally drag on the bottom of the box when it was near the center of the table. Arrakis 2.0 has a new sandbox design with a glass bottom.

I decided to move the bottom of the sandbox up closer to the top of the table to allow greater visibility when seated. I will have to clean sand off the underside of the glass top more frequently, but it’s a minor inconvenience.

I also decided to use RGB LED strips to light the table so I can change the colors once in a while. I bought LED kits that came with two 5m strips to a box, with a 12V power supply, controller, and IR remote control. The controller has two cables coming out to connect the two LED strips, always the same color. I modified it by swapping and resoldering the wires of one of the output cables so that the two strips will mostly light up in different colors.

There have been a bunch of other, smaller changes, and there will be a few more after the makerfaire. One thing I will do is simplify the electronics a bit- I’m going to use a single 24V 350W power supply to power everything, plus one buck converter to power the LEDs. I will remount the electronics on a hinged panel that will fold up under the table normally and fold down for easy access for maintenance. 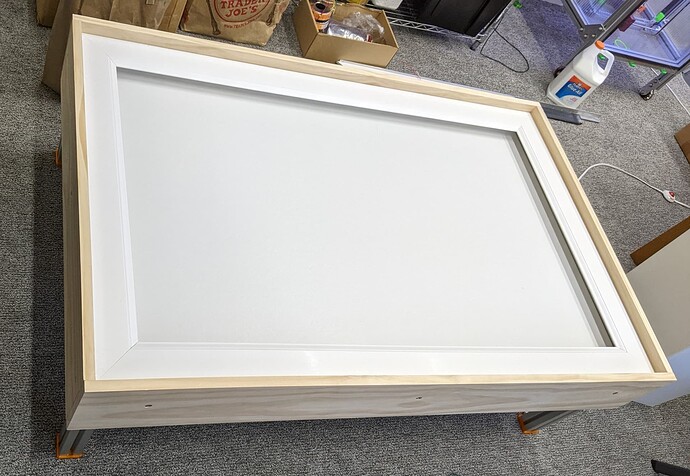 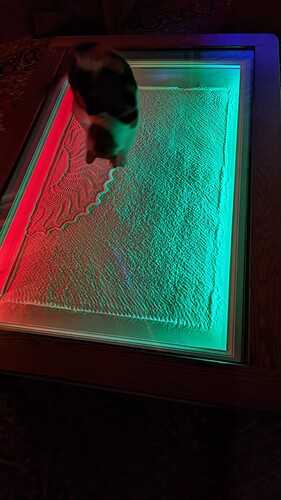 Ms. Kitty was going bananas on the table last night- I think having the ball closer to the top of the table is more interesting for her.

I’ve noticed that after a couple years of operation some of my pulleys are getting a little squeaky. I may have to replace some of them. I’m considering going to larger diameter pulleys, including the drive pulleys. That might reduce the drawing area a bit, but I think it will be good for the longevity of the bearings and will help quiet the mechanism even at very high speeds.

I’ll be publishing a blog post with all the changes soon.

I love the inset to hide the gap and hold the glass. Is that baseboard?

The white frame that covers the LED strips is made from polystyrene base board stock, prefinished white, so I didn’t even have to paint it. I cut it at 45 degrees and printed some PETG “L” pieces and solvent welded them together using ethyl acetate (good stuff for welding PETG parts together). 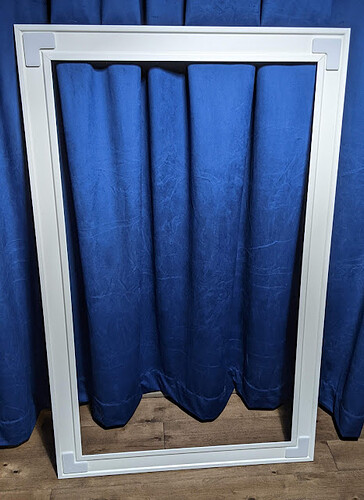 The LED strips are mounted in aluminum “C” channels that are screwed to plastic strips that fit in the t-slots. I also added a couple short pieces to the short sides of the table. The white frame just sits on top of the C channel pieces.

This is how it all goes together: 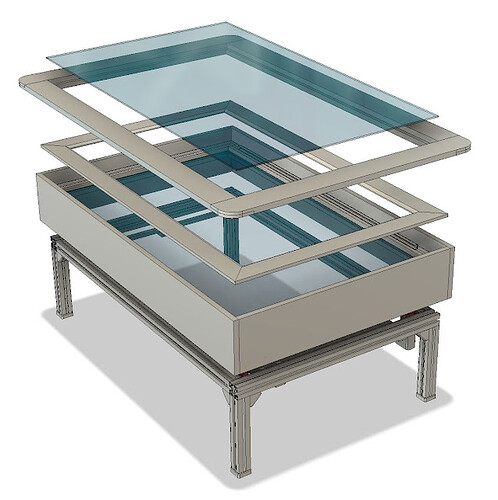 The sandbox bottom is a glass sheet the same size as the top glass. It fits into a 45mm t-slot frame. That frame is about 6mm larger than the XY mechanism frame, so the sand box will just drop on top of the XY mechanism. The pine wood side panels (probably going to change) are just screwed to the the bottom t-slot frame using t-nuts and M6 screws. 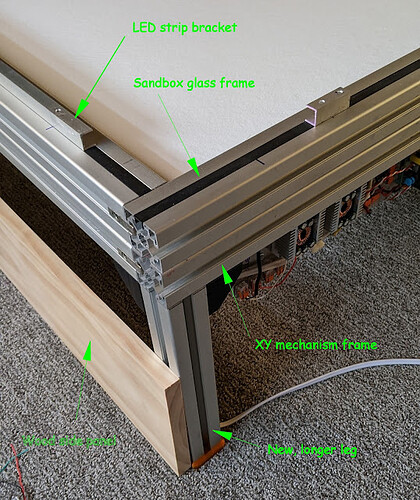 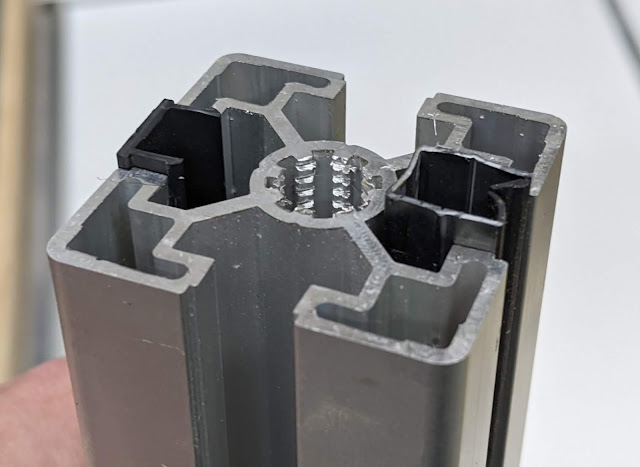 I hauled the table to and from the Maker Faire Milwaukee over the weekend and found it very easy to pick up the baking soda from the white vinyl surface covering the bottom glass.

That is awesome, I love it! I saw that new make article as well, Enter Arrakis: The Coolest Sand Table I pointed it out over where we were discussing the homedics Sand table.

My friend is moving his restaurant and he wants a sand table in one of his booths. I might have to borrow a lot of your design. I am not sure if I should use the extrusion like you are or just thicker wood than I used on my big table. Just need it to be more robust than normal to handle the abuse.

I didn’t see the Make article. We did a video “meet the maker” chat on Friday morning and they’re going to be editing and posting it to youtube. I’ll post a link when I get it.

For that restaurant sand table I’d advise hiding the power switch. Arrakis (and 2.0) has an illuminated foot switch. At the MakerFaire I expected kids would be stepping on it every 5 minutes, but no one did until Sunday afternoon. A lady with 4 kids came to look at it and the first thing she did was step on the power switch.

The Duet controller board has wifi, but for the show I just set it up to run a macro that consisted of a sequence of pattern and erase files so I wouldn’t have to do anything but turn it on to get it running. I put together a sequence of about 30 patterns that ran for maybe 10 hours.

I’m going to be putting the electronics on a hinged (I grabbed a bunch of hinges when I got the t-slot at the scrap yard) panel so if I need to get at it I can just swing it down for easy reach. I’m also going to simplify it a bit by powering everything from a single 350W power supply (the servos can take some juice at high acceleration!).

I found something interesting in the last couple days- Arrakis 2.0 has started making terrible noise when the Y axis moves. I’m 99% sure it’s because the PTFE bearings have worn out and the screws or pins are now contacting the aluminum t-slot.

UHMW is a lot harder to mill than PTFE because it tends to grab the cutting tool. I’ll be making new Y axis bearings (and probably X axis bearings) in the next few days, once I figure out what I did with the UHMW stock I used to have. I’m considering a redesign of the magnet carriage- simpler, and with UHMW bearings (possibly a block of the stuff with a square hole for the X axis guide tube).

Not sure if you rather have the comments here or there.

I absolutely love it! The frame is great I used paint and some sticker vinyl on my glass just so I could get the LED’s as high as possible to give the color shadows more contrast. I bet that felt is a good addition as well.

I suggest giving WLED a shot, I like to play with the LED patterns while the table draws. I got some nice effects that way. Even did some sand table spider webs and there are tons of Halloween effects build in, they look amazing.

That large square magnet you are using, does the ball stay centered? I tried probably a dozen magnets of all shapes and polarities, I found anything much larger than the ball and it would wander in the field. If I went too narrow it did not have enough power.

Sorry I have been messing with my table all day yesterday and this morning so it is fresh in my mind. (The Sandify team has just added some new fonts, pretty fun to add comments to the household,

I thought about using paint on the glass, but was a little afraid that with changes in temperature it would end up wrinkling and peeling off.

The magnet is a 1" cube, and very strong. I do see some wobbling of the ball as it moves, but I think that’s just because the magnetic field is acting like a spring. If the magnet is oriented so that the poles are vertical, the ball prefers to sit at the center of the face on the magnet. If you put the magnet sideways the ball will tend to sit in a corner of the face.

Wow that’s amazing very nice work and thanks for such a great description.