Yeah, if it does anything (questionable), would probably make more sense on a MPCNC 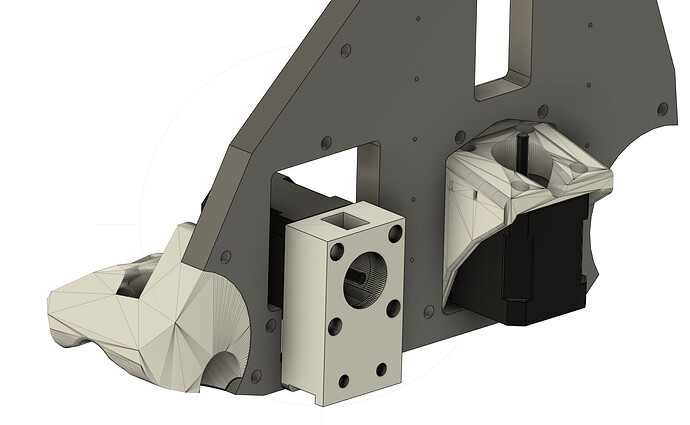 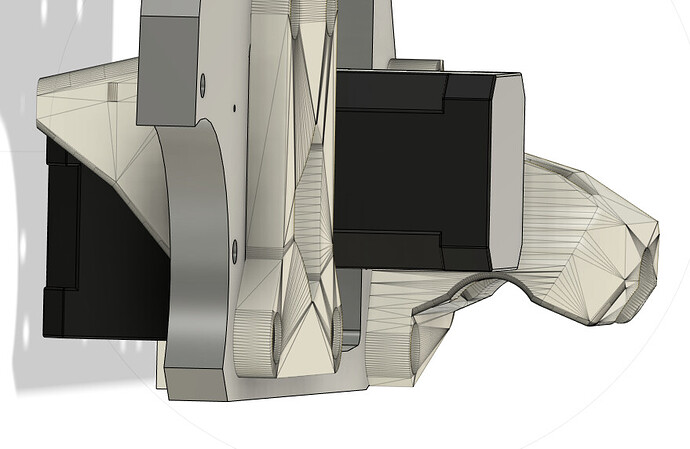 Any opinions on running the Y belt like this? Still working on how it’d mount and how to do limit switches. My thought was it’d mean the table could be a couple inches narrower and on the side using wheels (though not totally applicable to me since I’m attempting to use 2 Y rails) you wouldn’t have a belt sticking up that could be a bit more vulnerable in a shop to getting hit. Idk if there are pros\cons to running the belt perpendicular to the table vs flat. Also would be a smaller pocket for the Y steppers in the YZ plates.

I do not think it will cause an issue other than you still need a gap, at the beginning and end of the belt, or the belt will be stretched and pulled upwards. And considering this, your savings might be limited compared to the original design.

Any opinions on running the Y belt like this?

Not sure how that is going to save any room but running the belt that way will gunk it and the pulley and idlers up. Sideways is far better.

any idea if it’s as strong as using struts?

). Curious what feed rates you up maxing out at.

Oddly during testing we found that the rails only really help with torsion. Deflection is pretty solid with only the plates.

For a bit of perspective on Ryan’s comment there, the initial beta design called for 1/2" EMT for the X rails, and deflection was still pretty good. What we found there though is that near the center of the span, the gantry could twist, causing inaccuracy along the Y axis.

Because I had the steel from my LR2, I used the 1" X rails from the LR2, and that made it resist that torque.

Yeah I could really twist it, but deflection is super minimal. The only way I can think to help twist is add wires inside and that is not elegant. 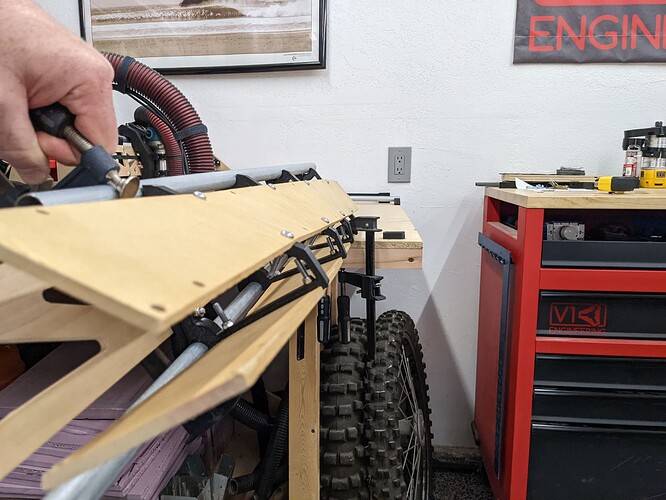 Finally got some time to get back to the shop. Finished my table last weekend, should be able to cut my strut plates this week.

Just to show how uneven my floor is, even the leveling feet weren’t enough. 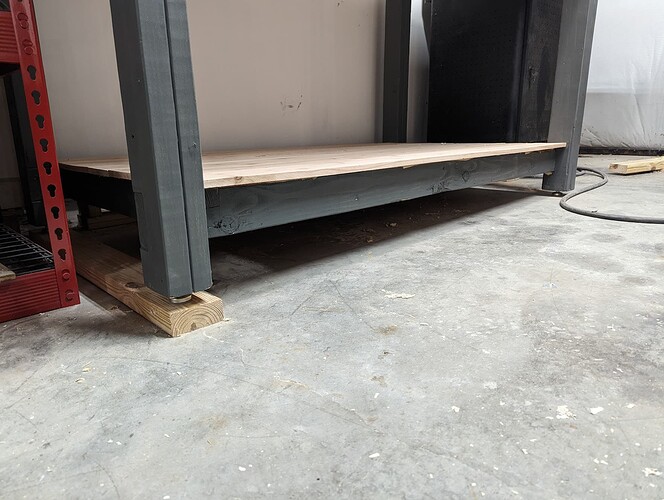 I’ll be adding some plywood to the sides and back to stiffen the table up later, but wanted to get going.

The first boat I build in my garage had a twist because I failed to account for the slope in the floor when setting the frames up on “feet.”

I just finished my first iteration of this concept a little over a week ago…just before hitting the road for Oklahoma to see the grandsons (oh, and their mom and dad). I will be home later today but probably won’t get to look at until tomorrow.

Detached steel building workshop. But yeah, I’d forgive the lack of flatness if there was a drain in the middle of the dip, but there isn’t. Makes trying to use the room as a small wood shop a pain because every table or tool has to be leveled. I plan on building an outfeed table for my tablesaw, but it means I need to either build a table the saw sits on that includes outfeed, or I have to get real creative with leveling casters lol.

Is it worth building a wood floor on tapered “sleepers” to get it level? I know wood floors are way easier on the feet than concrete.

I’ve seen videos with folks who have levelling feet with big nuts welded to the end of the threaded rods so they can run them up and down with a cordless drill or impact driver and socket+extension without having to bend down.

That’s actually not a bad idea. If I were to do that I’d probably wait for wood prices to go down a bit. I’d have to figure out a ramp or something, from the doorway it’s probably 3" lower than the wall and when I need to rip big pieces of wood on the table saw I have to wheel it out into the larger area of my shop.

Finally got her running! Time to cut out my struts. Using a cheapie 1fl 1/8" upcut bit at 10mm/s. 1.65mm doc in 4 passes. Surprised I never broke a bit! On my first test cut I realized I didn’t tighten the collet enough and dropped the bit but managed to kill it in time before any harm was done. 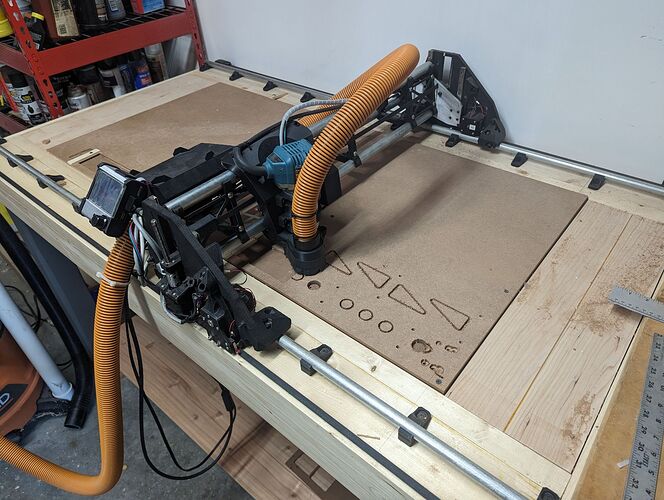 The dust boot does a pretty good job getting the dust out of the narrow 1/8" grooves. 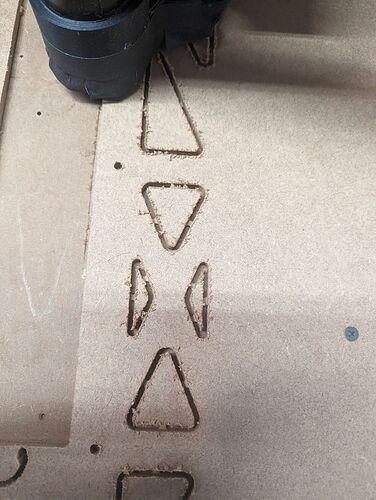 Cutout, detabbed, and sanded. My lower strut is different because of the redesign for the 3rd tube, the bottom brace is narrower than the front and back (which are standard width). 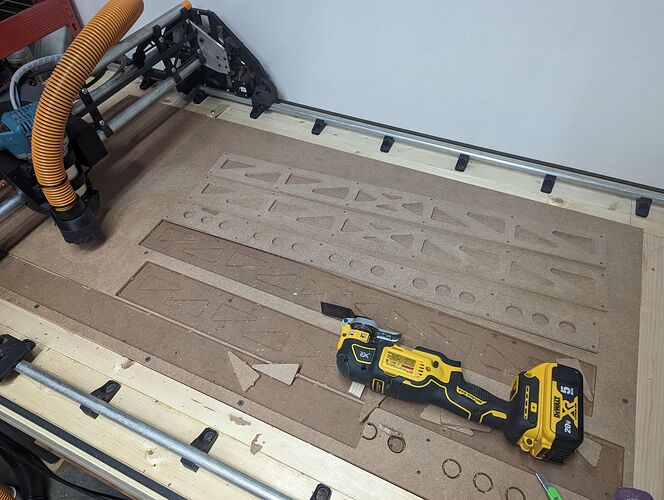 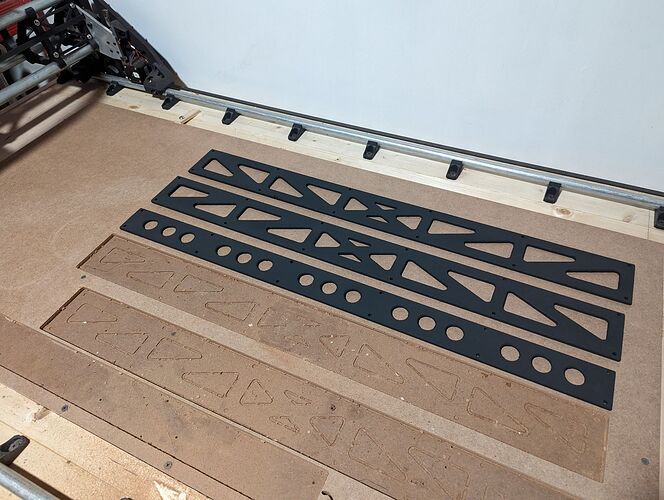 I had a hell of a time getting it going, while I was doing the squaring I noticed the controller (TFT32 on a SKR Pro 1.2) would just… stop taking commands. The TFT would remain responsive, but homing would stop working, the console wouldn’t consume gcode sent (as I was jogging it around the machine). Had to restart A LOT. Finally got the Y squared and decided to attempt a test cut on a small version of the strut I mocked up. Was getting gcode errors, seemed to be the same whatever problem that was causing me headaches when squaring. I also have an esp01 on there for wifi, much handier for jogging and entering gcode line by line but it too would no longer could send anything to the controller requiring a power cycle. So I have to sort out whether it’s because of the esp01, the tft firmware, or the controller firmware.

That sounds like the screen isn’t receiving the ack messages, so it stops forwarding the next gcode. It might be due to electrical noise, but I’m not sure how to solve it. It is a fundamental design issue, IMO that the protocol can’t resend the ‘ok’. So it is dependent on a perfect serial connection.

Well fun, I wonder if I could wrap the serial cable (and maybe the router power cable as it passes under the controller box) with some foil tape or something. When I pull things apart to install the struts I’ll make sure there’s not like a loose connection on those ribbon cables.

It is only the black cables. The gray cables are only for marlin mode.

@claytonisbob, noticed your belts are horizontal, are you currently, or planning to use an extra fixed belt on each y-axis (like @tgm022861’s build) to help reduce slack like this LR3 Mod?

I did start with a small, stock LR3 build for this project. My goals for it were to replace my Primo if it will perform as well as the Primo and to evaluate the gantry design for a NEMA 23 version to replace my NEMA 23 LR2. I think I will need to use the 3 rail design that someone else created to mimimize deflection while supporting my 2.2kW spindle on a 5 foot span. I am using a pair of idlers to pinch the short length of belt. [20221026_164256]

Ayy, I’m not the only one. I know Ryan said a vertical belt is better for keeping things clean, but for just my usage and not wanting to accidently bump the belt and break things I wanted to go horizontal. I think if I end up inevitably going with rollers instead of rails on the front (I may toy with this to see if there’s any difference) I’d get a pretty flush front of the workbench. So far the dual Y rails are working pretty well though and don’t get in the way for my radial arm saw next to it.

As far as a fixed belt, I hadn’t thought of that but it’s a good idea! I was thinking of gluing a strip of wood below to keep the belt from guitar stringing, but an inverted belt would likely help keep it from moving around and add a little clearance for the lips of the idler rollers.