Straight as a crooked arrow.....

Here’s a brain teaser for everyone. I’m printing up some cable chains for the big rewire project. I had enough from previous prints to do the long X axis run so figured sure, let’s do the other two. I’m printing them in place, nine links per print, rafted. When they come off the bed they are deadly straight. When I pull the raft, still killer straight. As soon as I break the links loose - they take on a new life. Have a look.

Any ideas as to why? I’m printing four more sets now but turned 180 degrees on the bed thinking that I’ll just zipper the links together and it’ll come out straight in the end. Super odd though. 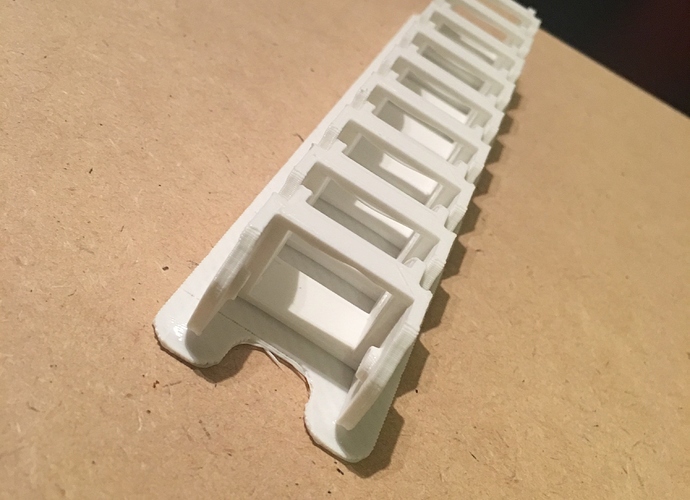 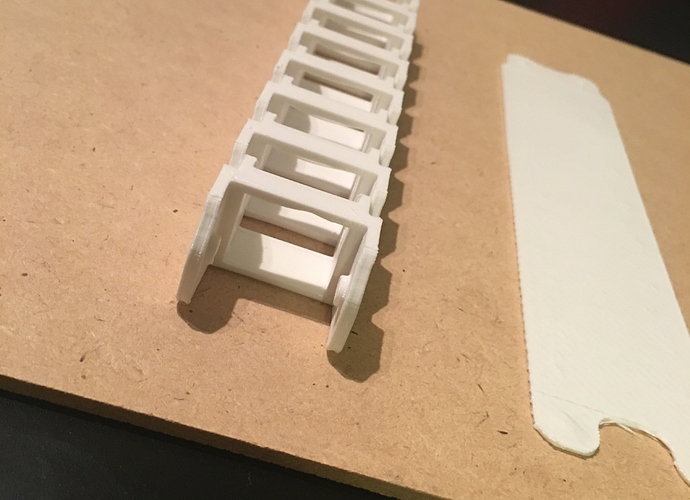 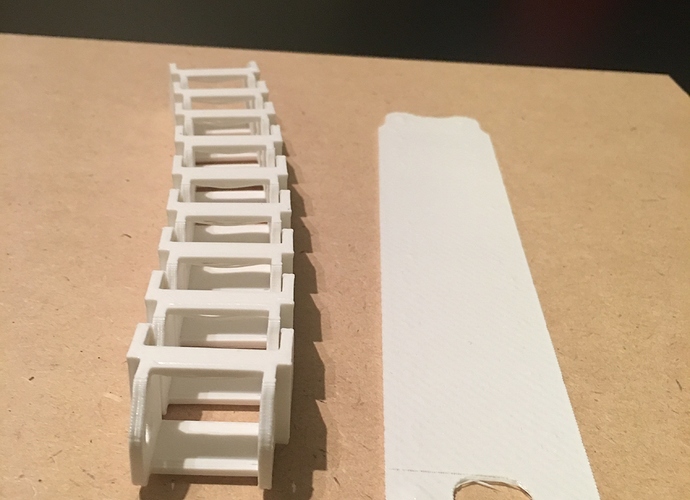 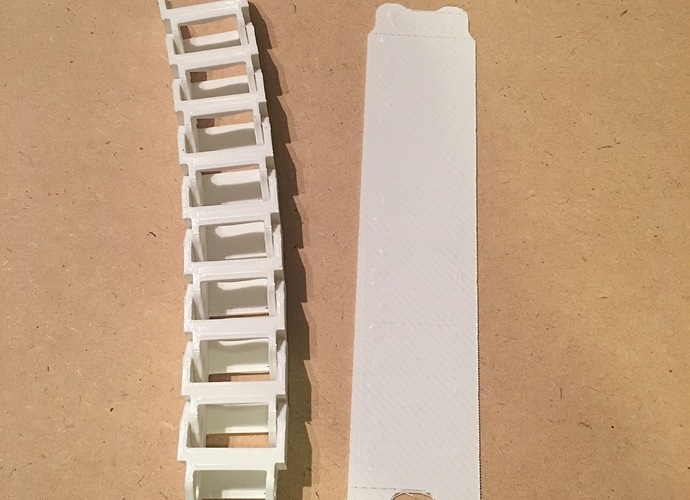 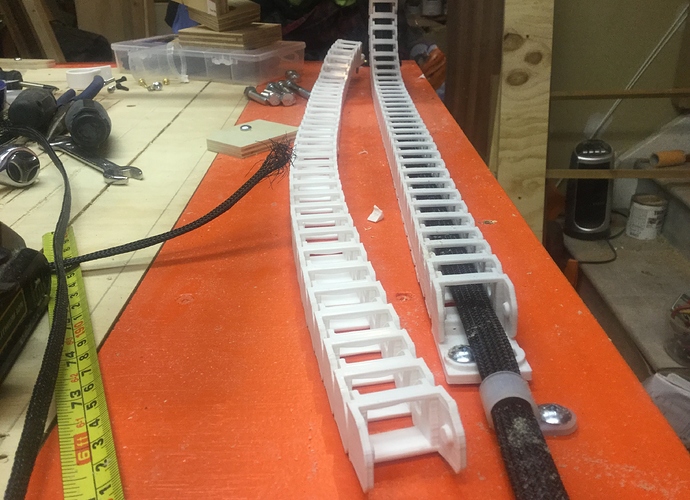 the reason you get the bend after, is because at the pivot point there is a little bit of room between the parts. So that multiples a tiny bit over all the parts which ends up giving you the bend.

you can see the little gap in between in your middle picture.

I think that little gap is just a result of the bend. With a little pressure I can physically hold it straight, but laid down on the MPCNC it wants to just curve. Interestingly the rotated (on the print bed) one bends exactly the same way - just not as drastically. I assume it must be something in the STL? Bottom photo is the new print. Maybe not a deformity but just something that, combined with the printer (the Ender) makes it do that. The straight chain in the photo was printed a while back on the MP3DP (Yay V1! ; )

Now I’m curious. I’m going to try rotating one 90 degrees and see if i get the same bend. 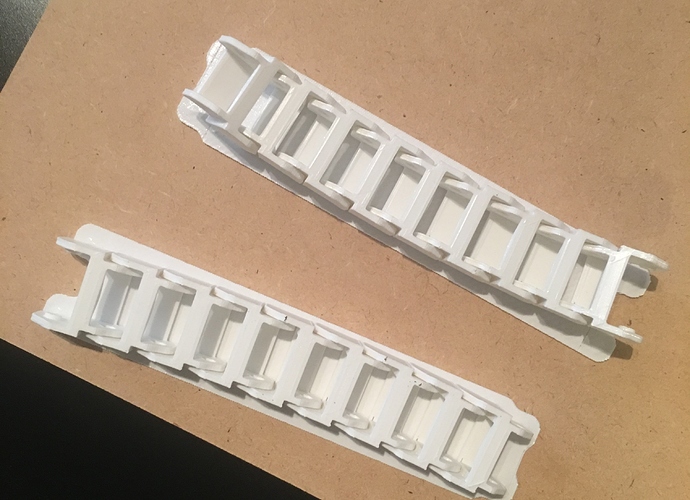 Interesting. Was the straight chain printed integrated or with links separated?

My guess (of course just speculation) is that the slicer is optimizing the extrusion toolpath and the ‘zits’ as they are sometimes called, are all lining up in the same place, and it happens to be on one of the joint pins or sockets. I’ve seen prints with a ridge at the nearest point between two objects, because the slicer decided to start/stop every layer at the same point to minimize the travel between two objects. For print-in-place, this nearest point is likely to be between the pin and the socket of the joint.

Do the pins and sockets have any visible artifacts?

All good theories. I’ll throw one out there myself. Is the cooling fan blowing on the side that it is curving toward? The fan could be causing uneven cooling causing one side to stay softer longer and causing imperfections that result in a bend. You could test by disabling the cooling fan completely during your next print. This is just a guess but I have seen similar problems with ABS. Never with PLA though so I could be way off. Many 3D printers have cooling fans on both sides or even coverage from 270 degree angles. I have seen a few with cooling fan coverage from 360 but those never had great results from my experience.

Since you have previously printed what I presume is the same part without this issue, I am inclined to think there is some wear involved, perhaps in the nozzle.

I haven’t run into this particular situation on my Ender 3, but I do get different results when printing at different angles. I generally try to rotate my parts in Cura before printing because I get fewer artifacts. I should probably follow my own advice and try changing my nozzle, but I have a lot of other priorities than constantly tuning a budget 3D printer…

The 90 degree test but it was a mess - stringy, ugly, stuck links. Definitely a calibration issue I know. The Y dominant chunk I did on the MP3DP was straight as can be but the front most 2 links warped up (adhesion issue or cooling issue). No biggie.

These are definitely right up there in the “Man I wish 3d printing didn’t take so long” camp but I’ll get em printed. I’m going to get the MPCNC running without for now and do it “proper” when I do it. For now just some zip ties and tape measure chunks…I’ve got wood to cut!

You could be right there you know…it’s like six hours per nine links on either of my machines.

I did the same as MegaDad3D, bought links for my MPCNC after printing a boat-load that wouldn’t quite bend right, or were too tight, or too lose, or cracked when assembling, or 1 came off the bed and ruined a whole plate of them… Too much screwing around. Amazon and done.