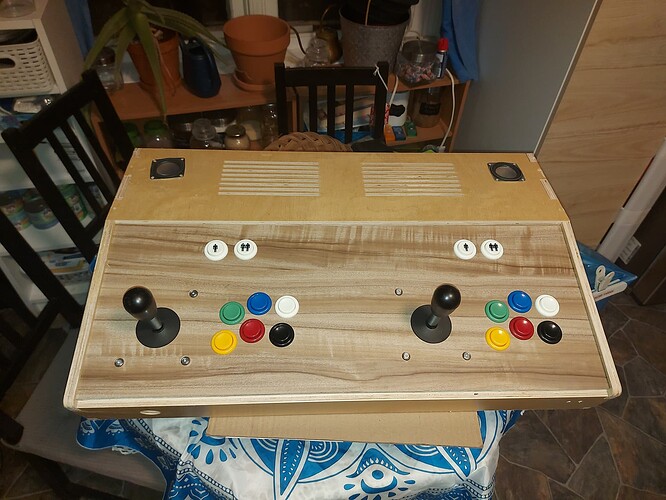 So several years back I made a retro arcade slab. The top panel was laser cut 1/4" acrylic, and I used some 36X6X1/4" poplar to put a box under it, which held a PC mainboard. It worked quite well. Some 3D printed pieces held the hard disk, and a few other touches made it work reasonably well.

But it was a big rectangular box, and some things needed improvement. Like there was no ventilation, no speakers, and the wires from the joysticks kept getting caught in the CPU fan.

The games themselves, good. Portability, also good. The joysticks are excellent for the retro look and feel, but just a little wrong. They sat just a little too high, and those arcade machines never had the control deck perfectly level, they sit at a 10-15° angle.

So… this. The same control deck, because it works. That acrylic piece is 26X9.5" so the box fits it into slots in the side pieces. There is a center brace to keep it from being pushed in, which also supports the hard disk. (Standard 3.5" disk format.) There is a micro ATX mount pattern on the bottom set up to meet with 1/4" stand offs and the rear I/O panel fits into the back. There is no support for add on cards, so it needs to be a motherboard with built-in video, but that isn’t a problem nowadays. I have drawings to add card support, but it can’t deal with full length video cards. Not sure it’s a good idea either.

I would not put those vents in the top again, unless cutting that panel from.something that does not have grain. They tore out the top surface badly even with a brand new Kyocera single flute ot was awful. I might make another one as a gift, probably will be made from MDF. A little heavier, a little less expensive. Maybe.

I put in little 2" speakers. There is still the option to use the motherboard speaker outputs, these hacr a little amp connected to the AC97 header panel on the motherboard. It won’t be fantastic sound, but should be good enough, and it’s lightweight.

Designed in Fusion360, and cut on my LowRider3 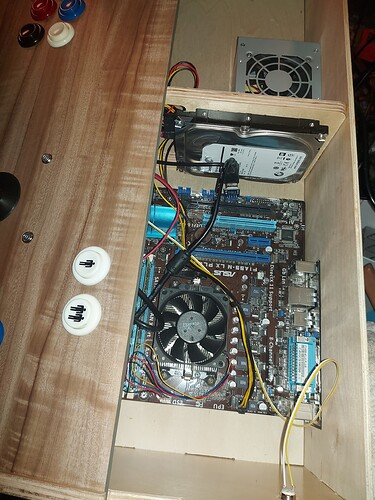 I updated the OS on the computer, for better compatability, so it can run more games. Going through my MAME and Neo Geo roms collection to see what works.

Nice work the wood panelling is neat too.
Thanks for sharing
There is so many options you can do with arcades. It’s a hard decision

Very nice! I see player 3 & 4 start buttons. Are you going to mount USB ports or use bluetooth controllers?

Players 3 and 4 use USB t connect 2 more small joystick panels. I was going to make some, but reasonably nice acrylic ones are inexpensively available 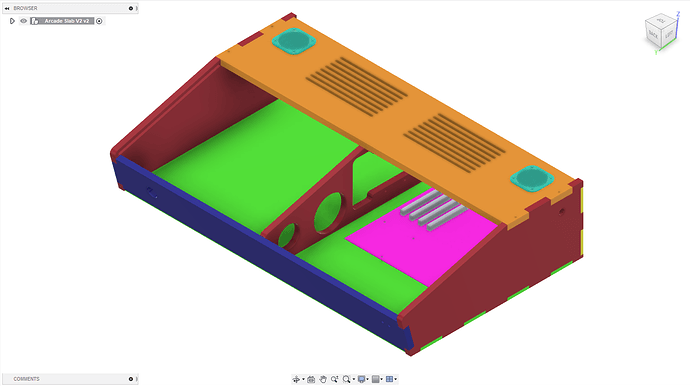 ArcadeSlab1521×853 163 KB
Screenshot of the Fusion360 project. I used the colours so that I could easily visually check for overlaps with the box joints. The Micro ATX mobo’s hot pink came with the model, I don’t know if it was deliberate, but it extends to the I/O panel and the card backs, though the PCI slots are in white…