Well I think the space robots came and tuned my machine while we were out for dinner because…tada! May not be as pretty as Ryan’s but it’s printed and still stuck. (Notice I refrained from the use of the word ‘erect’? Damn. I just did.)

”What are you printing daddy?” Ugh. Nope. 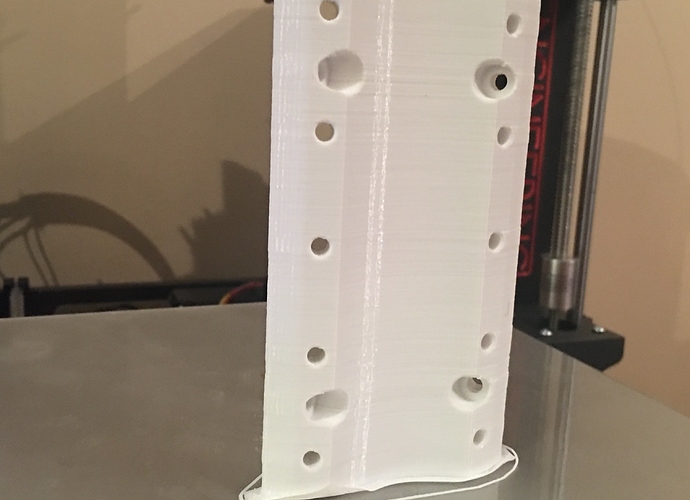 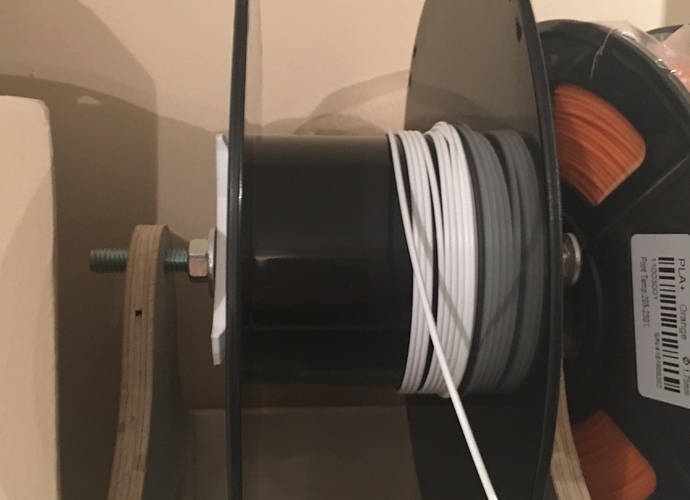 If you are standing there, you can feed the next in right after, get a nice multicolor print.

I changed filament once. Holy not a success at all. Maybe now that I’m a little more experienced I should try again…hahaha

I may have ordered a spool of the wood stuff but I’ll leave that guy vacuum sealed for quite a while yet here. One variable at a time says my wife (she’s a scientist ; )

One variable at a time

The only truth I know…

You are still over extruding quite a bit.

Try to progressively lower your extrusion factor until you get perfect prints, you’re almost there. I’d say you’re extruding about 10% too much.

Try to progressively lower your extrusion factor until you get perfect prints, you’re almost there. I’d say you’re extruding about 10% too much.

Hey Dui, where in Slic3r do you control the extrusion amount/rate?

In repetier and octoprint, you can use the “flow rate” slider to tweak it for the current print.

The extrusion is controlled by the extruder steps per mm as well as filament size. Ryan’s given us what I’ll call the nominal steps per mm for the extruder based on math using the diameter of the extruder gear. That will get you really close, but since the extrusion is a volumetric need, there’s another variable here to deal with - the diameter of the filament. You can sample it with a micrometer and come up with an average value which you then insert into Slic3R (under the filament tab IIRC). Of course, that may vary a bit between and even within a spool of filament.

You can search youtube videos for how 3d printer filament is created from plastic beads. It’s kind of neat and at least gave me a better understanding of how variability in filament diameter can come about.

I’m still yet to understand why people use exotic stuff for their bed instead of good old glass+glue stick.

I’ve printed everyday for years with different machines only using this technique and it always works great.

That’s one of the biggest mysteries of life for me. Just like how the dinosaurs disappeared (probably a fight with space robots though).

I use that a lot too. I don’t know why, but sometimes something I’m printing just won’t stick, so I pull out the tape. I even have mounts for both on my printer enclosure!!

Dui, ni shuo de dui wrote:
Try to progressively lower your extrusion factor until you get perfect prints, you’re almost there. I’d say you’re extruding about 10% too much.

Hey Dui, where in Slic3r do you control the extrusion amount/rate? 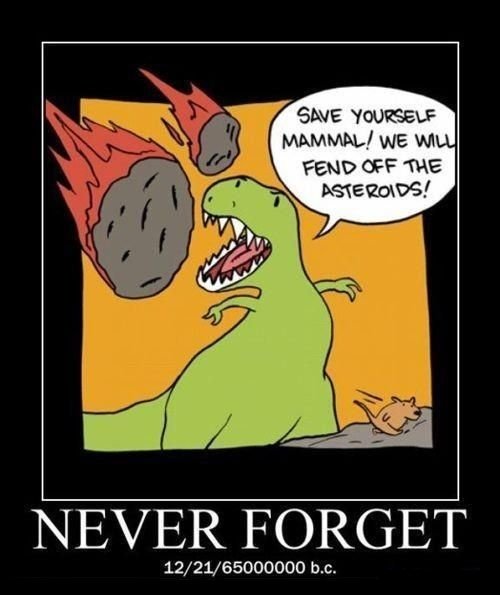 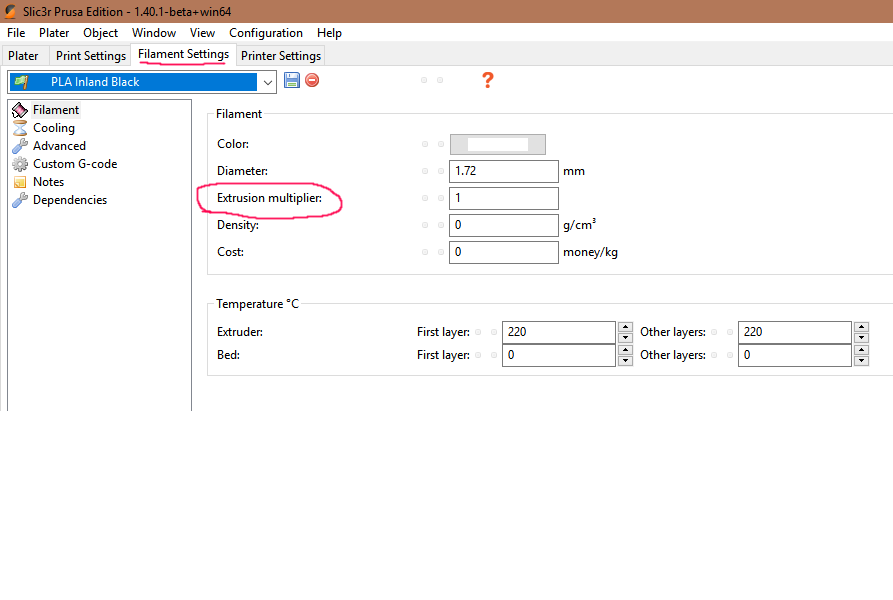 I am not a chemist but I work with a few of them. They explained to me once why glue sticks work with some filaments and not others. To keep it simple I will use ABS and PLA. Glue sticks, Elmer’s glue and that water soluble PVA support filament are made using the same stuff. It is a plant based material. PLA is also made from plants and the two materials bond really well. That is why you can use a glue stick with PLA.

ABS is not made from plants. It is made from dinosaurs (Fossil fuel, oil, petroleum, etc.). It does not bond as well with the plant based materials. So glue sticks don’t work as well on ABS. PEI works great though from my experience.

At one point I had a chart of dozens of filament types and what the best bed preparations were for each type.

Oh I also wanted to mention a trick I have used with good but not perfect success. If your brim peels up like that you can pause the print and tape it down with painters tape to keep it secured to the bed. Don’t use clear tape it will leave a mess on the bed.

I prefer glass and hairspray (not any hair spray will do - Aqua Net or something with the same ingredients like Suave Max Hold).

I agree that overextrusion may be an issue. I typically use .90 to .95 extrusion rate with PLA. Also, bed leveling, Z0 distance from the bed, and slicer first layer settings all make a big difference to prints sticking to the bed. I like to level my bed with everything heated to printing temperature and set Z0 so it’s just barely kissing the glass at all leveling points. Then in Simplify3D, I use 90% first layer height. With all of that, I get perfect first layers, print stay stuck, but aren’t too stuck that I have to fight to get them off. If there’s a lot of surface contact with the glass making it difficult to remove, just set the glass in the freezer for a minute and the part is usually free when I take it out.

I’ll heat everything up really well and recheck the bed and z axis heights - my “dots” on top of the lead screws look to be right but I bet it doesn’t take much to be off. Then I’ll try another calicat with the extrusion multiplier cut down to .90 and see what the result is like. Thanks everyone yet again!

I am. It familiar with the MP3DP. So this may not work. But looking at the pictures it seems like a very similar design to a prusa i3 knock off I bought A few years ago. One thing that helped me with it was a trick that insulated the underside of the heated bed. I used foam core aka foam board aka gaterboard. It is usually sold in hobby shops, craft stores and even dollar stores. It won’t melt unless it gets up to something like 200 C. Since the heated bed never gets above 120 on my machine it is good enough.

Insulating under the bed makes it easier to maintain bed temperature and it prevents structural parts under your print bed from getting hot and swelling/expanding.

Cork board is a better insulator but it was more expensive. Cardboard also works but not as well.

Sheesh, you’d think in a learned forum like this people would know the end of the dinosaurs was caused primarily by the volcanic vents opening in the Indian subcontinent, not by the asteroid that popular ‘knowledge’ claims.

Sheesh, you’d think in a learned forum like this people would know the end of the dinosaurs was caused primarily by the volcanic vents opening in the Indian subcontinent, not by the asteroid that popular ‘knowledge’ claims. ?

I thought they were all turned into gummy candies.

I ran into issues getting ABS to stick to the build plate, but never PLA. I just use the hair spray trick. For ABS, I put some acetone into a jar and let some messed up prints dissolve in it and it turns into a slurry that you can paint onto the build surface. It’s nearly impossible for it to not stick. I’m assuming the same thing would work for PLA if you keep running into issues with it sticking. It shouldn’t be necessary, but it might tackle the plate adhesion issue.

Except PLA doesn’t dissolve in acetone like ABS does. IIRC I remember seeing a discussion when I was first playing with trying to get ABS working on my MP3DP that delved into which solvents worked with which plastics. I have tried soaking nozzles filled with PLA in acetone and it takes quite a lot of time for them to get to the point where you can clean them out.

The stuff used to melt pla will also melt you.

Sheesh, you’d think in a learned forum like this people would know the end of the dinosaurs was caused primarily by the volcanic vents opening in the Indian subcontinent, not by the asteroid that popular ‘knowledge’ claims. ?

I thought it was the expanding earth! (Seriously, that’s a theory - the earth is supposedly slowly growing and that growth interrupted the dinosaur’s migration patterns leading to their extinction. There are some entertaining videos on YouTube, but not nearly as entertaining as the Flat Earther videos.)