I have an issue unrelated to V1 Engineering products but you all are the people I feel can help most.

I have an Ortur Laser Master 2 and have been printing my company’s logo on large wooden crates. I have been having issues with the laser seeming “shifting” its work area and ruining my engravings. See below. 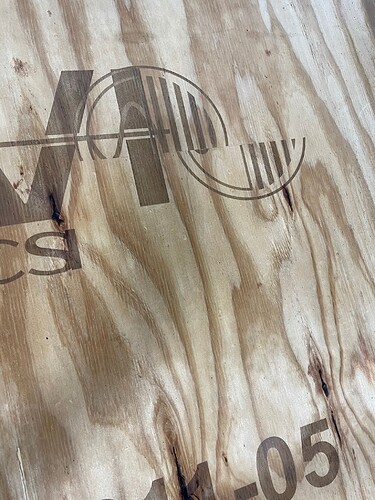 For your reference, that circular logo part should be a nice circle and it clearly is not. My initial thought was the belts were skipping on the drive pulley so I tightened up the belts a bit and tried again, same thing happened. Next thought may be that people in the shop are bumping the crate during process. But the size of this shift is much larger than the frame would ever really move plus I measure the frames location before and after and it hasn’t moved.

Now, at my house over the years I have always used my laptop which is a great laptop with good specs and I have never had this issue. Here at my company’s workshop I am using a Windows tablet and I begin to wonder if messes up with Lighburn at random points during the engraving. I can’t really prove any theory without starring at the engraving or the 4 hours that its running but thats not practical.

I am going to use a laptop tomorrow instead of the tablet and see if it performs better. Hopefully that is the answer.

Just putting this on here to see if anyone has had this issue before or has insight.

Does it shift at the same point in every job? Maybe there’s a problem in the gcode generation.

I don’t know the machine, but have you checked the grub screws on the drive pulleys?

There is that one thicker block (the I in VI) that doesn’t look messed up. Was that engraved earlier? Why is it just the circle and sine waves?

It definitely looks like something in the driver, wiring, or belts. Not in the firmware or the windows tablet. The tablet and firmware would have different mistakes.

Here is the finished product for reference. 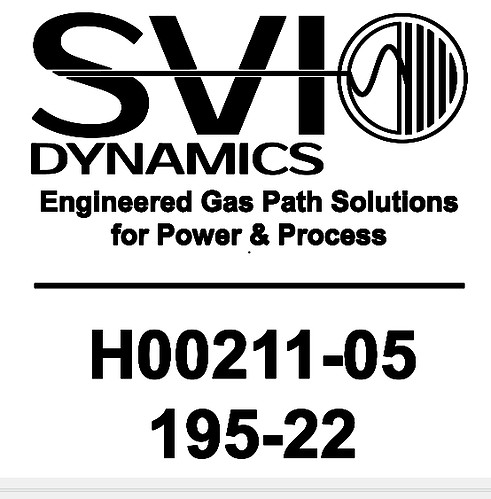 Does it shift at the same point in every job?

It does tend to have its issues when it gets around that circular area. But the result isn’t always the same. I will try and get a picture of another instance where it happened a few weeks ago and it looks much different.

It definitely looks like something in the driver, wiring, or belts. Not in the firmware or the windows tablet.

I have the grub screws quite tight and the belt is tensioned pretty well. I don’t see how it could be either of those at this point. For a bit of background, here is the size of a stock Ortur laser. 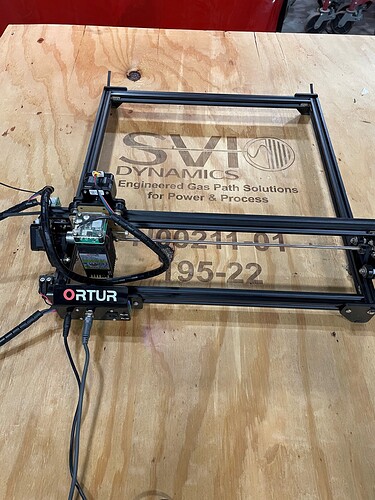 I wanted the logos to be bigger so I took it apart and rebuilt it with longer extrusions. 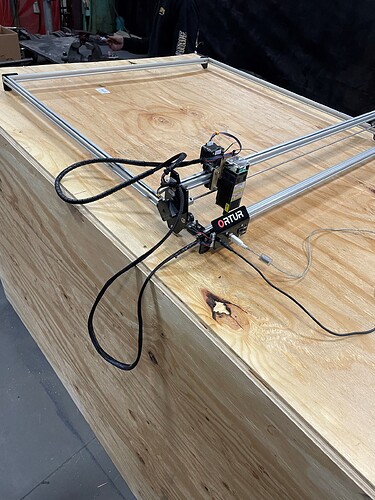 This required rewiring the whole thing. I have done some small test burns since the modification and it works great. So I am not sure it would be the wiring either. AND, I was having this same problem before when it was still in it’s original size before the modifications.

Everything leads me to believe its something non-physical. I am going to use a laptop today instead of the tablet and see if that changes anything. Not sure it will, but I have to rule that out.

When you set it back down do you measure pretty carefully that it is square, it could just be binding as it drives down the track?

My second guess is the accelerations are a bit too high?

I was able to get it very square. I got it just about 1/32" across the diagonals over a 39" square! Plus I can move the laser head around the machine in all directions freely without feeling any interference.

Here are some other examples of some mess ups. Different mess ups. The first one here you can see the circular area is squiggly like it skipped steps a bunch of small times. And the V is off, and the words “Solutions”, “Process”, etc…

The second one is ALL OVER THE PLACE

This one is off in the X and Y direction. 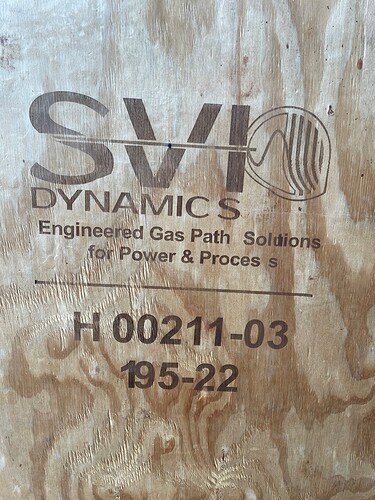 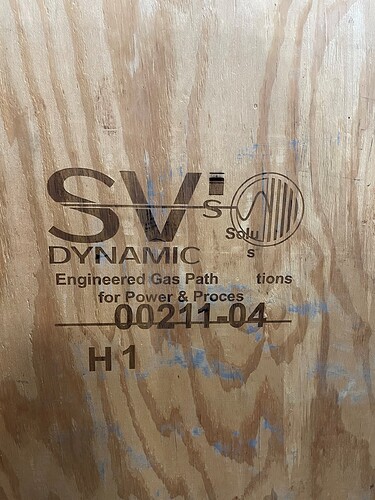 These examples happened while the laser was in its original factory form, before modification.

Unlike my router CAM jobs, Lightburn uses relative positioning (G91) for its work. This means that any error or transmission problem can result in a slip like this. If the Lightburn log is long enough, take a look for an error. Consider a higher quality USB cable, and perhaps take some shielding steps.

Hmmmm. You might be on to something here. The laser is working right in the middle of a weld shop where there are two to three welders working at a time. Perhaps the frequencies from the welders are interfering with the machine. I should try taking this outside away from all of this and try again.

Unlike my router CAM jobs, Lightburn uses relative positioning (G91) for its work.

Oh really? That negates a lot of my advice. This could definitely be noise on the sending cable. I hope that is it.

Here are some other examples of some mess ups.

Those are extremely bizarre. I don’t know what order it is doing these symbols. But these are pretty weird. Once a stepper loses its place, it never returns. Same with relative commands. If a G1 X10 gets read as a G1 X20 it would be off and never return.

What kind of firmware is running on the control board? Is it grbl?

I like this idea, but USB has checksums, acks, and if it suffers from noise or lost pockets, it typically, slows way down, but doesn’t send bogus commands.

But there may also be some point after the USB where the signal does not have those checks, and the noise will be garbled text. That part of the signal is usually inside a PCB, with a fat ground plane protecting it from noise. But who knows.

Well I did it outside away from the welders and it was PERFECT. 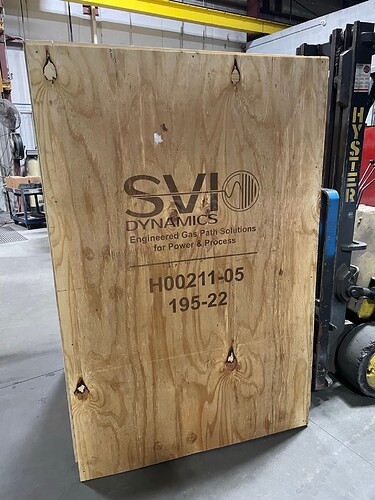 Must be getting some interference in the shop. I didn’t change the USB cable or anything. Just moved it outside.