Yeah, I’m fairly sure you can pretty much do anything for personal use only… it’s when you use it for a commercial purpose you can run afoul of their lawyers… but they have to care enough to spend the money to come after you.

To pay more homage to v1 you could use mpcnc feet and conduit to support your levels instead of all thread​:grin:

My 3d printer ability is lacking… life would probably be easier with one that I can get to work well. I have a mini Delta and have a real hard time with accuracy.

Delta’s are fun to watch, but getting them dialed in is a huge pain in the ass. I upgraded to a corexy machine, soooo much easier to get working properly.

Interesting. I have a Rostock Max, that’s a workhorse, and I don’t recall really having to do much to get it printing accurately. I got it second hand, and it had some bent and broken parts, but after repairing and replacing those bits, it pretty much just worked. It does have an auto bed leveling routine/sensor. They are fun to watch.

That’s what I had, V2. Could never use the full build plate no matter how much fiddling I did with it. Now I’m slowly cannibalizing parts off it.

Here’s the base plate and motor mounts for V2 of Oscar… some of the red marks you see are from a red marker… others are from my blood. “If you’re not bleeding, you’re not working hard enough”

Why are you using lead acid batteries??

Strictly financial (remember, I just bought a low rider as my Christmas present). I had a SLA battery charger already so I didn’t have to do anything for charging. And SLA are way cheaper than lithium ion. If this project works, then maybe I’ll splurge for nice/light batteries.

But it is really, really heavy. I positioned the batteries forward toward the the front caster since its solidly attached to base plate. The back wheels are currently held in place by those bearing mounts that are tabbed and gorilla-glued into the base plate. I think the glue will be strong enough to keep the tabs from pulling out, but I might put a few screws into it as well. The axles of the wheels are just 1/2-inch bolts that I epoxied into the wheel (wheel is a tad over 1/2-inch bore). The epoxy might not of had the right ratio since the two goops came out of the double syringe inconsistently (was old), but I’m thinking the combination of it and the two tight nuts will be sufficient.

Crazy idea: make a super precise robot and mount a router that sticks out under it. Build size: cosmos

Needs guiding grid! I’m looking for one that can orient itself using the stars

Somehow, I find the idea of a robot with a sextant intriguing…

A: Those are Sealed lead acid batteries, not much worry about spilling em’
B: In my experience battery acid is pretty weak. Doesn’t really burn when you get it on your skin, just sort of itches. I’ve never suffered any Twitch ill effects Twitch, Twitch, I swear. 8^)

I have found that all of my successful personal projects have 3 things in common: blood, sweat, and tears. If I get to the end and haven’t achieved the trifecta, I figure I missed something and hope no one else notices.

There used to be one that had little ir modules you could put in rooms that would shine a constellation on the ceiling that it used to find where it was. 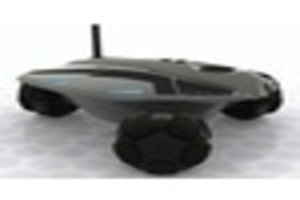 Progress. Base/Motor/Charger plate is assembled with PVC supports glued in and installed. The middle plate (power plate and motor controller) is assembled with some glue drying on the PVC supports… I transferred the wiring from the old robot so I had to lay it out a bit funky to avoid having to remake wires to get make them longer. Does the Job™ 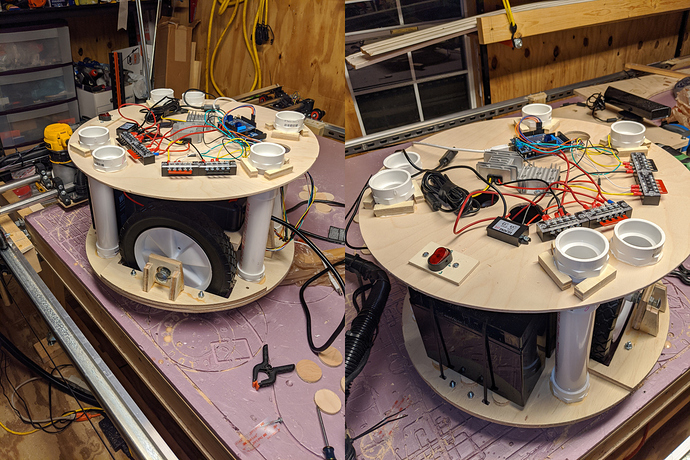 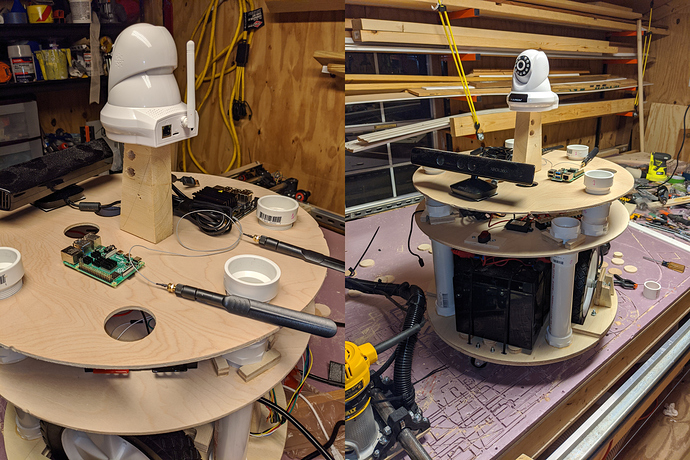 Doesn’t the kinnect have a camera too?