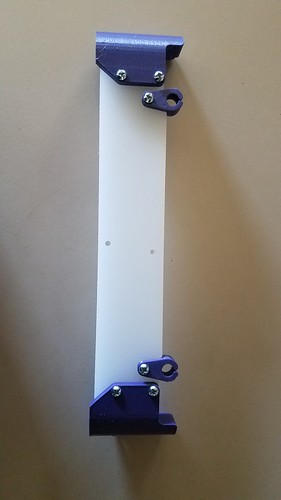 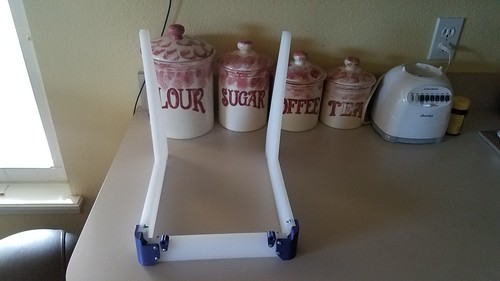 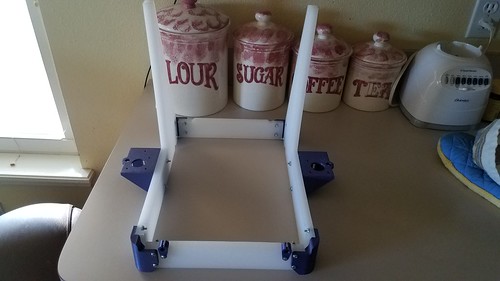 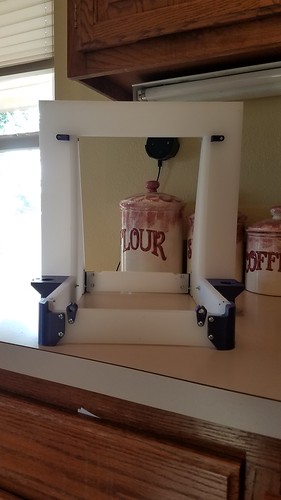 HDPE is pretty close the the worst thing you could build a printer out of. I’m going to need to use jeffb base to stiffen this thing up. But it sure looks nice!

I’m I’ve been working on a part cooling fan. It’s being a bit of a pain.

I like my HDPE, and it is thinner than that. Maybe a different material? for me it is holding up well, and machined really well.

Well at least yours looks nice.

You made one out of HDPE? It did machine well. I think it’s really just that front and back panels. The stuff I got is very soft. It has a good bit of flex to it. Which i don’t remember HDPE being like that. It could just be the brand I went with.

I actually have two of them the red/white and a black/white. It was the first cut I made with the LowRider cnc for the balck/white build. The red/white is pretty old. Maybe I got “starboard” brand but as far as I know it just means it has UV inhibitors in it.

The front and back do have some flex but you have such thick material it should not be an issue for you. I have 1/4" HDPE and 1/4" MDF and both have a slight bow but I haven’t added anything to them and the mdf is the weakest but also the very first one so it hasn’t failed yet. I can make a printed part that can strengthen them if you feel there is an issue.

It may not be an issue. It might just be me putting more force on it than the printer will ever see. It it might actually suck up a good bit of the vibrations. Lets just see how things are when i get it up and running.

Well… I tried to up load the MP3DP firmware to the rambo… First I was getting some timeout errors. Then after a few tires it finally uploaded. Then I noticed nothing was coming across the LCD. Then A smell. I unplug it, plunged it back in and it smells again. Unplug it, upload the original firmware for the MP3DP, the one that’s still on my first machine. No difference, same thing, that smell. I look around and apparently something is telling my Heater cartage to heat up, and not just a bit, but like 700 degrees at least that was what S3D was telling me. It was burning a wire it was laying on while I was working on trying to get a fan mount for the aero. Any ideas what’s going on?

Loaded the CNC firmware back on it. It’s working again. But it’s not the same. Not sure if I loaded the correct one. x works fine, y just makes a funny noise, like it’s not getting the power needed to turn, and only one of the z motors moves.

Got it, I had to change the motherboard to rambo mini. Everything seems good now.

Whew, that was close. Glad nothing was destroyed.

Stop! You still need to set the driver voltages or they will probably be to high as well. You can get the values in the advanced config form the other firmwares but you need to set it to whatever steppers you are using.

Wow, I think you got lucky there! It does the same thing if you load rambo onto the ramps it kicks on the bed and fan mosfets at boot.

I guess I need to upload a minirambo firmware.

Stop! You still need to set the driver voltages or they will probably be to high as well. You can get the values in the advanced config form the other firmwares but you need to set it to whatever steppers you are using.

Wow, I think you got lucky there! It does the same thing if you load rambo onto the ramps it kicks on the bed and fan mosfets at boot.

I guess I need to upload a minirambo firmware.

Yeah, I stopped. Once I got it to load and not go nuclear I just shut if off. Where do I find the value for my steppers?

I have the math here,

The values can now be set in configuration-adv.h now instead of the rambo tab.

Okay, so mine are 1.5A. So i shpuldnt need to vhange anything right?

Yes you need to set them, if you are using my ramps firmware the values have not been changed.

Let me finish my breakfast and I can upload it for you.

Okay try it out and let me know if there are any issues.
https://www.v1engineering.com/projects/project-3d-printer/

Thanks, I’ll get to it later tonight after dinner.

Got a fan printing now. The shell function in fusion can be a pain. I had a much better design that what I’m printing now, it just wouldn’t shell it. So it’s pretty basic, I’m sure i’ll get a lot of blow back. As long as it get’s enough air to the part it will be okay.

It loaded fine. Now I just need to get it properly wired.

Well, x and y only move one way. Z moves up but will move back down to where it started by not go lower than that.