Who would have thought you can actually have too much suction…

I ran mine again, I think a brush would be really easy to put on the outer edges of the plate. I just watched a video somewhere and he showed how much the brush actually helps. If I find a strip brush maybe I will try it.

You can buy a good brush at harbor freight for a few bucks. What is a strip brush?

Are you planning on just gluing the bristles on or somehow making the removable? I see soamy with removable plates that I can’t help but think that’s really important.

I was thinking how I should share my modification of the 611 plate today and this seems like an appropriate place to put it.

So… the stainless steel plate fairy likes to leave stuff laying around my shop… dang, turns out this stuff is pretty heavy!

In an attempt to shed some weight I took the “speedhole” or “swisscheese” approach. this plate is also not intended for a 611 at all, its for one of those cute little makitas! That other other other hole is for a vac hose attachment I’m working on, or maybe a mount for other stuff if that doesn’t work out. 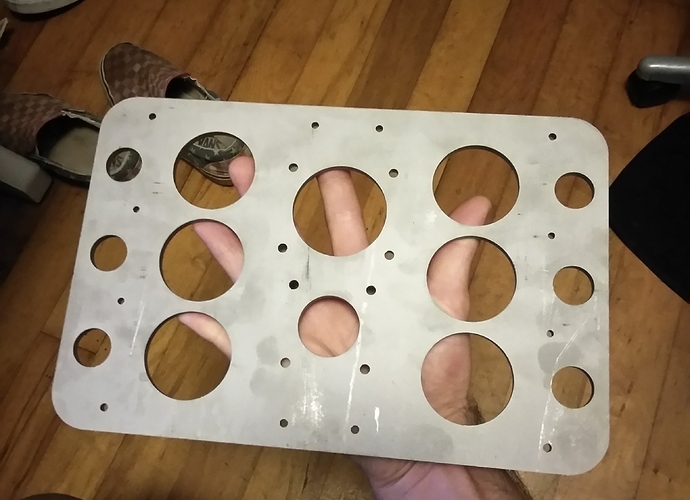 Sweet, shine that thing up lets see some bling!

I hope to have a trial run of aluminum lowrider sets coming, seeing that is making me antsy!

Sweet, shine that thing up lets see some bling! I hope to have a trial run of aluminum lowrider sets coming, seeing that is making me antsy!

Oh man, that would take a super long time, some guys in my boat club do that to their aluminum runabouts, I’m way to ADHD to complete a task like that.

I might hit it with the wire wheel though, brushed will look nice with the carbon nylon parts… lets see if these things are actually any stronger. 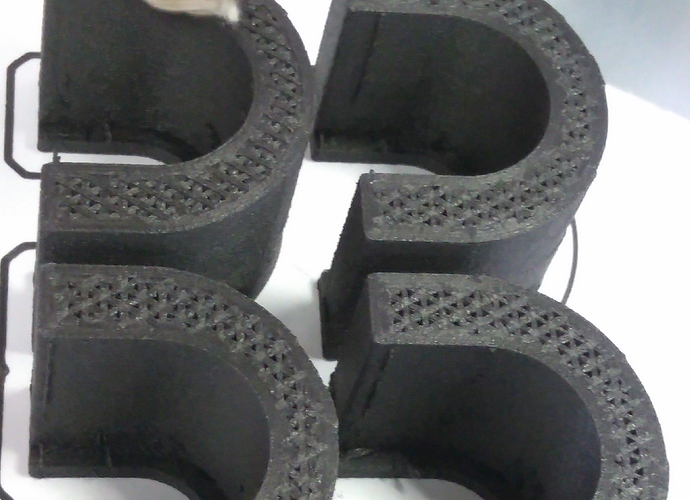 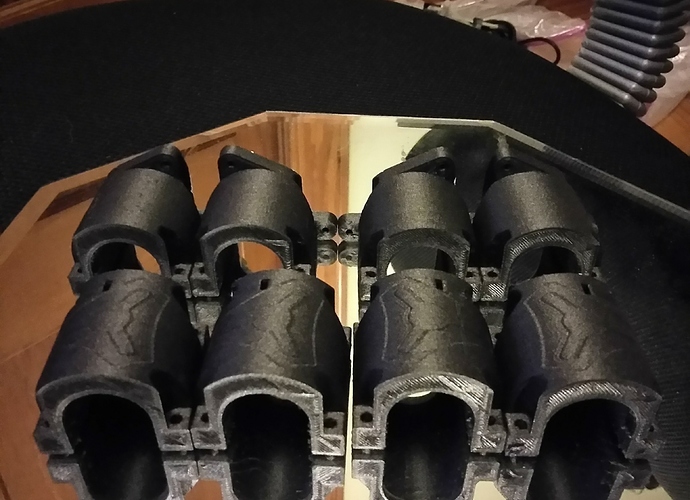 Someone made a mount for a freakin’ laser on the extra Y motor mount, didn’t they? Or did I dream that? I see a HicWic mount on TV, but I remember someone posting just a mount for a laser, or am I dreaming?

I remember a pen mount?

I took Jeff’s 611 plate dust boot and made a mount that puts the suction at the bit. In other words, there is a channel that runs from the dust boot to the router. I noticed that the air vented from the 611 nose was blowing chips everywhere so I also made a cover to stop it from blowing on the work. The cover and mount could be incorporated into one piece but I just forgot to do it initially and I don’t want to re-cut the mount. It was 1/2" board with a 9mm deep channel. Used M3 30mm for the dust boot and m4 25mm for the router base. OEM router base screws are not long enough. 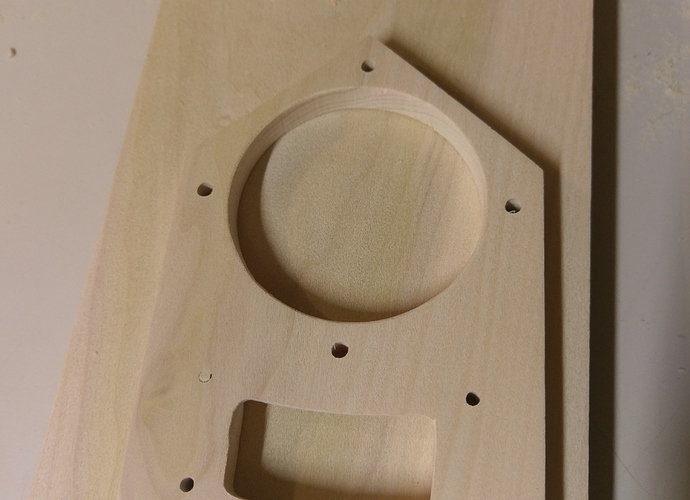 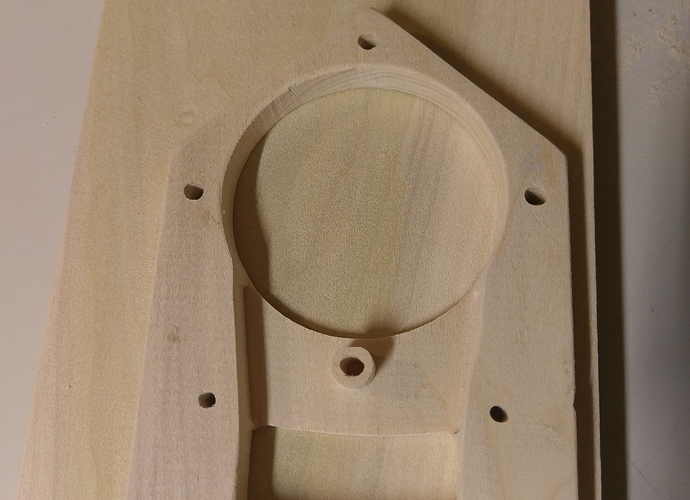 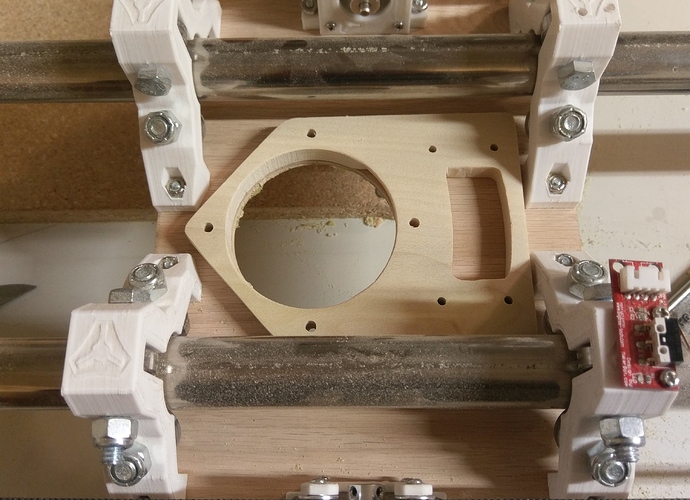 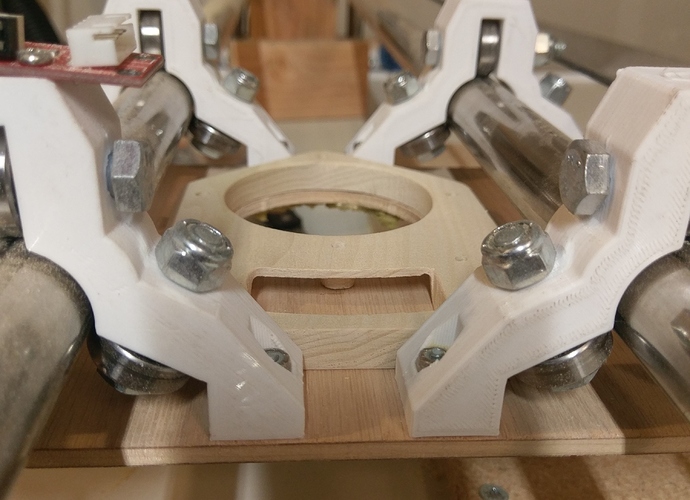 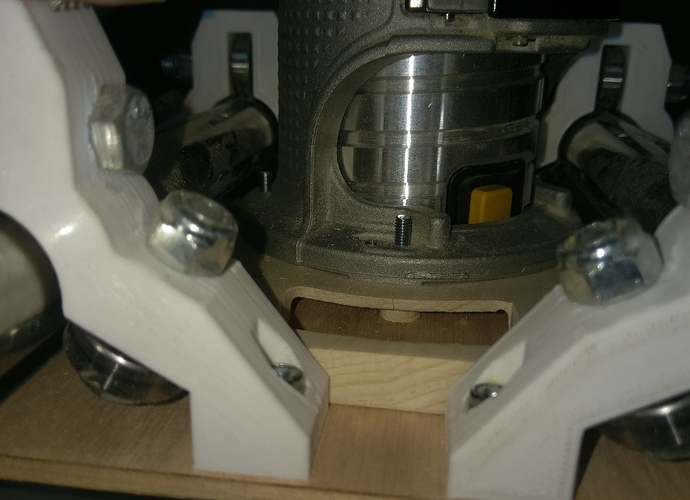 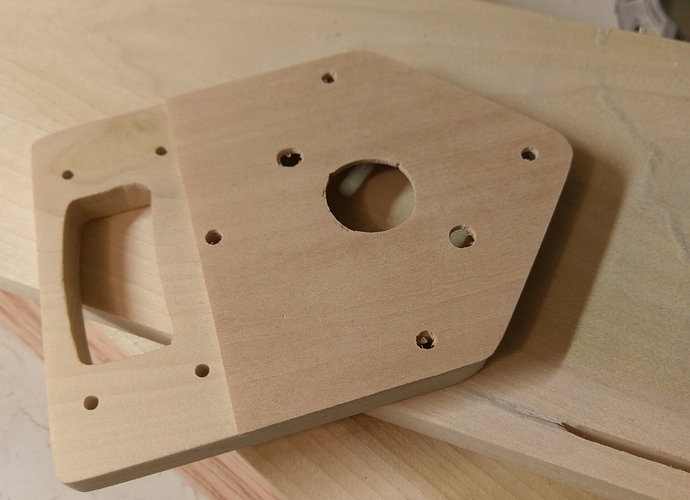 Ah. It just moves up. Cool. That might make working on it easier. Removing the plate is the reason I haven’t worked on it more.

I don’t see the vent cover in the pics, unless I don’t understand, which is a high likely hood since I’m half asleep right now.

The vent cover is in imag0127 and imag0128. My 611 assembly was dissassembled by the time I realized the router blew too much air. I used a piece of bass wood where I manually cut the collet and LED holes out. It gets bolted down with the mount. I’ll post the dxf later this evening.

I was wondering if there was a reason you didn’t orient the x tubes vertically, and have a single z motor mounted on the plate that moves the router up and down? I am not particularly sold on having the z motion in the carriages. My main difficulty has been keeping the z screws clean, as they tend to get filled up with dust if I do any significant cutting near the edges.

That gives you a fixed height, and that is how every other machine does it. This way, if you want to carve 10" of foam with a giant bit one day, and 1/4" aluminum the next, you can with the same machine.