did my first aluminum cut, and also broke my first bit :> I think it came out pretty good, until the bit snapped anyway. 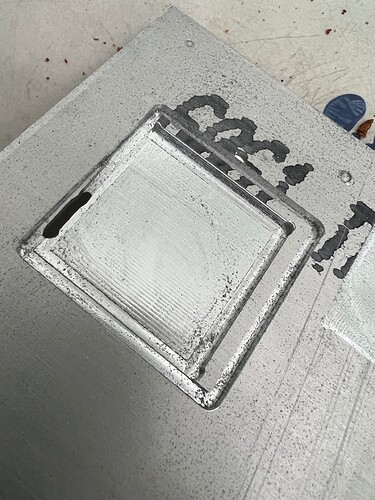 XYZ touchblock maybe? That was my first alum project, and it also came out a bit rough. Looks like it was walking off path just before it broke through there… that tapered edge leading into the hole. Guessing that was an overly aggressive ramp down? 1/4 is definitely more robust as far as breaking, but you can still ruin parts if certain parameters are not right.

Yep, bingo :>
I ordered some 3/16 aluminum to replace Lowrider plates, then was told I should use 1/4”. So I am using it to dial in settings for aluminum.

I don’t know how you would use x/y with the touchplate, but i more liked the look of it, so only plan to use it for z. Also lower chance for me to lose it lol.

I think maybe it got hot and that caused it to move and then break. thinks to do it another wd40 soak. I was having some issues with z not wanting to go up without some binding or slipping, but since I had to take part of it apart it’s been pretty good.
I was also there when it did die, didn’t see but I heard. Seemed like it went deeper than it should have

I also made it in 2 different programs, so I can let things cool down before other cut

3/16" will be fine, but you’ll need to either use shorter screws (8mm, I think) or else use 1/16" washers. So far as I know, that is the only real consequence. 3/16" aluminum will still be plenty rigid enough for the machine needs.

Well they weren’t big enough for the sides anyway, and I’ve got the 1/4” now so may as well use it.

Finished second attempt and looks pretty good, I need tramming though. Think it will be good enough to makes the LR3 plates?

And yes I forgot to overcut the corner, oops 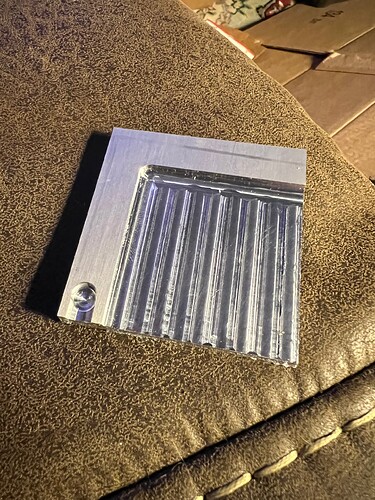 That should be plenty good enough to cut side plates IMHO. LOL, yeah you’d have to fix that corner if you wanted to use it to probe xy. If you do want to do that, you’ll need to make use of G10 (set workspace offsets), and hopefully have a gcode sender that stores probe positions for use in gcode scripts. Here’s the script I use to probe xyz using bCNC, a 1/4" round probe, and my ~50mm square touchblock:

bCNC saves the last probe position as variables called prbx, prby, and prbz. In the comments I note how the dimensions of my actual block and probe are used to calculate the values entered in the G10 line. For example, my block has an X side that is 7.02mm thick, and probe has a 3.125mm radius. So the offset for the x probe position becomes, -7.02 - 3.125 = -10.195. This value is subtracted from prbx in the second to last line (minus a negative # so +).

Further, note the 35mm jogs in x and y go with my roughly 50mm square touchblock. If you’re block is like 80mm, and you start off centered over it, the probe will move -35mm in x, and crash into the top, lol. So make sure those jogs will actually clear the edges of your block. There’s kind of a lot going on in that script; be sure you understand it completely before running it on your rig.

I start with the probe 20mm above the block, roughly centered on top of it… run the script, and it sets zero for all axis automatically. Of course, you can’t cut with a probe; so you have to rezero z or otherwise offset the tool before cutting. I honestly don’t use mine much… only like 5 times since I made it. It’s really only good if you lose position on non-conductive material, which is something I have been good at avoiding in general. The 5 times I used it were for items that had to be flipped for backside milling, and keying in that position mechanically was too difficult. Generally I prefer to use pins/tabs/etc to fix position on a flipped part anyways. Makes an awesome looking paperweight the rest of the time though.

[edit: I think it’s good enough for plate work, but there are some things I can see that are not related to tramming. On the bottom edge, looks like your bit is sniping a little bit coming off the cut, with the small crescent shapes along that edge. There is also some waviness in the finish as you approach the bottom edge. Both of those symptoms point to some movement in the z axis. It could just be pipe flex, but I’d also check carefully for cracked z and core clamps, etc.]

Thank you sir, I will have to try that out once my connectors come in. I forgot to actually check out on eBay :x thankfully it was still there.

Took a couple more tries but I think I got the hang of it. I tried to make the top shiny too and missed a spot, and I’ve got some tape residue around. Nothing a visit to mr belt sander can’t fix 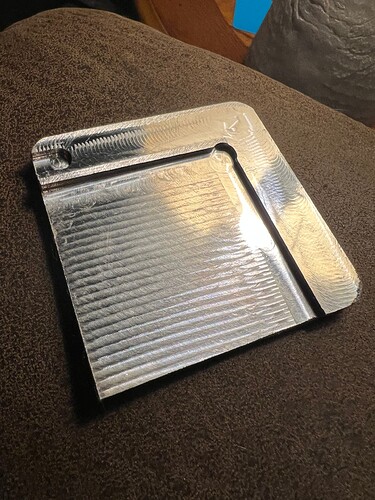 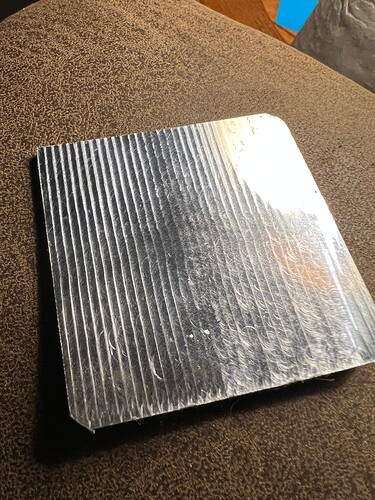 Thanks! I may move the wire mount to the other side, but working on lr3 plates first.