I’m pretty confused now, I have now printed quite some parts with the printer, mainly a complete MPCNC and some accessories, and I never really noticed it that I’m printing everything mirrored.
In fact, there were two cases for my ramps and raspberry, and I was thinking some I…t put’em wrong into Thingiverse.
When I printed another corner for the MP3DP during the night, I noticed that it was mirrored too, but this time I knew something must be wrong, as I printed a set correctly before on my Ender 3.
I also found out, that I had switched the X with the Y axis.
So I started from scratch, downloaded the Marlin-MP3DP_Ramps_16T_MK firmware and flashed the board, did some specific changes to my setup like board (MKS instead Ramps), Extruder (BMG), and Dual_Z.
Then I went further that all the axis were moving in the same way as if I control them on Octoprint.
So X moving to the left, value decreases, moving to the right value increase.
With Y it was a bit more tricky, I changed the Y_Home_Dir from -1 to 1, as the limit switch is on the back (away from me), also wired the limit switch to Ymax, and un-commented it in the firmware. OK, homing is working correctly now, X0,Y0 is on the lower left.
Thats also the settings in the slicer and on Octoprint.

And still it’s printing the parts mirrored, I don’t understand what I’m doing wrong here. It’s not a great deal to do it in the slicer, but something seems to be wrong.
Picture 1: How I download it from Thingiverse, and how it’s lying on the bed (after having mirrored it in the slicer)
Picture 2: How i appears on Octoprint. 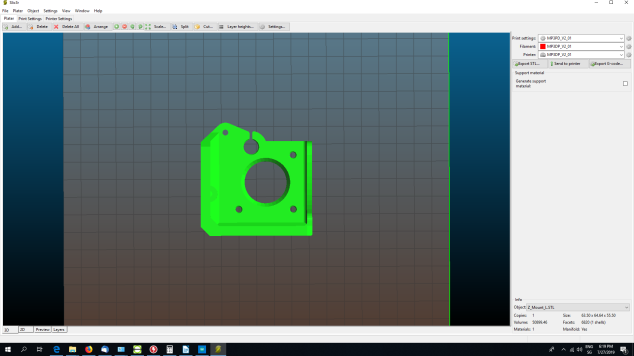 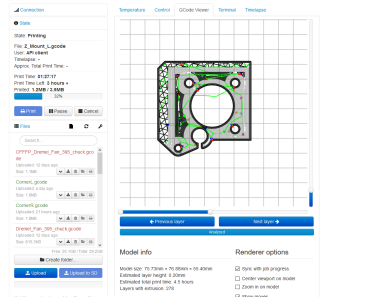 I think your Y is backwards. The front left corner is 0,0. So the Y axis moves the bed to the back, which causes thenozzle to move to the front of the bed. That is decreasing Y not increasing. I think you need to reverse your Y motor plug and switch your Y home direction back to -1.

Once more you were right. Indeed through my changes, my home position was actually X0,Y220.
After redoing it it’s correctly X0,Y0.
It seems no working correctly on all fronts, slicer, Octoprint, and the actual print.

Simply switching the X with Y, what was the problem in the first, place would have been enough.
But sometimes I’m overdoing things.
However, was a good training to set up the machine again. Had no backup after a PC crash.

Coordinate frames are hard. I deal with them frequently at my job and when you get it wrong, it sometimes looks better but isn’t right. That makes them really tricky.